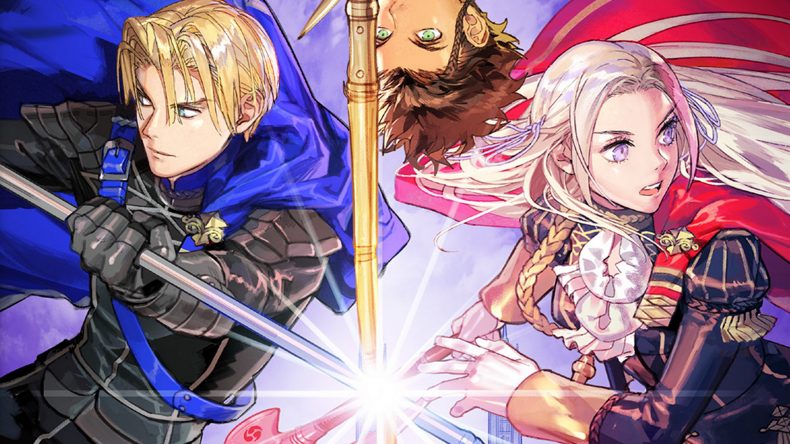 Luck be a lady tonight, they say, but my luck comes in the form of an axe-wielding robot called Dedue, a man entirely consumed by his need to protect Dimitri, the future king of Fodlan. This future king is, by the way, the “head boy” of your tutor group in a monastery called Garreg Mach – the “you” being Byleth, a young man (or woman; it’s your choice) who has suddenly been thrust into the life of a teacher.

Early on a battle is happening. I’m commanding my students (a melting pot of nobility, sexually charged teens, down-and-outs, and people who are, frankly, too old to be under my tutelage) on the battlefield and, of course, permadeath is active because this is Fire Emblem. I’ve managed to get Dedue stuck in a situation where he is the only one able to attack the last enemy needed to finish the mission.

An awkward happenstance (that I caused) means he’s well and truly out of the aforementioned luck and one hit will kill him. Dedue is the powerhouse-brute who delivers old-school justice for me, but he can’t reach me because there’s an empty square between him and the enemy after exhausting all of this movement distance who will, if not struck first, use his next turn to kill my man dead. I know this. I know all of this. Yet staring at the screen all I can think is “there must be a way out of this”, and there is… One of the other students – let’s say it’s Dimitri (or Lance-man as I call him early on) because it’s more exciting this way – has a bow, and while he can’t reach the enemy, he can get close enough to give the bow to Dedue, who can then use his turn to rain death upon his foes (with a single arrow, but it works better if you imagine some The Lord of the Rings style arrow-rain). The arrow hits; the enemy dies, and my students are without loss. My last turn begat victory, and despite what amounted to a load of menus and button presses, the feeling that a single decision clinched it means I’m the king of the world.

Yet it could have gone so very differently. This story is from early on – specifically under ten hours into the fifty-long campaign. So deep an RPG is Three Houses that, hours later, the same idea might not even have worked. Dedue is specced a particular way; even progressing through his academia leaning towards classes that are all about tanking. Many battles later and I’ve neglected his bow skills, and the actual bow-class characters are wielding weapons he’s not skilled enough to borrow, and in the exact example I’ve given you, he’d have died. In fact, near the end of the game I barely used Dedue, because that class is about strength and defence, not movement, so his “4” stat in movement is just not enough compared to Ingrid, who can move comfortably double that, and sometimes move again after striking.

Is your head spinning yet? I wouldn’t blame you, because although most of the time here is spent in a churchy Hogwarts, the plethora of side quests, skills, items, gifts, and general things to do is bewildering. Eventually the rhythm of the game clicks, and it becomes clear what Three Houses actually is: it’s Fire Emblem with added Persona.

Each main story mission comes to a head at the end of the month. A calendar will whizz by, and there are specific moments you can take part in these actions, side-battles, seminars (other year-heads and professors can teach you and your class and thus level up specific abilities) as you play. Monday tends to be when you teach your class. These are all meter-based actions: you choose a skill (swords, lance, flying, horseback, etc) and you teach them. There are activities in class that you can set which deepen relationships, and then at the end you answer questions from your pupils that, if you get right, level up your Professor Rating. The higher this gets, the more activities you can do during the day and… look, it’s exhausting to think about, but eventually becomes second nature.

Much of this can be automated, and by the time the credits rolled I had spent a fair few of the final chapters doing exactly this, unable to stare at meters increasing any longer. But I’m not sure you’d get the best results this way, because you can manually increase individual morale, and the higher the morale, the more they can learn (read: increase their meters for specific skills). These kids are finicky, and sometimes will tell your their goal is to be a lance wielding wyvern rider, only to change their mind and prefer horses two weeks later, but late-game wise, you’ll want to set their goals in order to allow them to take exams to move down the class route from basic to master. You’ll deepen relationships as you go, the bonds of friendship making battles easier when you’re with close allies. The payoff for all this “RPG-relationship” stuff wasn’t quite enough for me, but I’d be curious to see how people playing in different houses wound up, too.

I’m hesitant to really go any deeper than this, because there’s a real risk of writing 3000 words simply describing the mechanics on offer. Like Persona you can only do “so many” things on any given day. You can cook with friends, go to choir practice with your students, go fishing (it’s a JRPG, after all), or just use your time to level up your own skills. Then there’s the peripheral activities such as spending your “renown” on statues which give stat boosts when teaching and by God, yes, there’s just a lot to take in and do. The trouble is, this never changes. Hour 10 is much the same as hour 40, only the story has moved along. You still return lost items to people to boost morale; you still run round the same corridors and rooms to talk to people and turn in quests. In fact, by the end, I’d managed to end up with so many items that I could hand in quests immediately after getting them. Three Houses could have done with three actual houses, because 40 hours in, the environments are a little tiring. It looks alright, though. While it’s more impressive that the game is entirely voice acted, some of the visuals have jagged edges, and there’s a dearth of variety to what you see and when you are doing so much of it you’d be a better man than I if you weren’t wishing for a new room to explore. The cut-scenes are very anime, while every chapter has an introduction with some pretty artwork and movie-trailer voice work on it. In handheld the game runs well, but after an extended time in this mode, I tended to notice it being less smooth when docked: areas such as the dining hall, or open courtyards are choppy when docked. It’s neither a looker nor fugly, and although it’s a step up over the 3DS games, it’s not much of one, in truth.

The Koei Tecmo influence feels more prevalent when zooming in on the battlefield, giving you free-ish movement and showing where the visual fidelity lies, but some main characters suffer from jaggy textures and, while you eventually stop noticing, it’s pretty in-your-face. Even battlefields are re-used in some missions – again, some variety would have been nice for a game this long.

Fighting is the star of the show, of course. Turn-based and with a nice amount of difficulty. As you find tougher bosses they will have multiple health bars and shields which require a form of staggering, using “Battalions”. These can be purchased from the marketplace (and found from side-missions), along with items and weapons, and eventually, upgrades to your weapons which, by the way, can be repaired. Don’t be alarmed, incidentally, if you can’t find the blacksmith to repair weapons, as that doesn’t come for a good 6-10 hours.. A simple fight that looks like it’ll take ten minutes can go for forty, and squares on the battlefield that offer cover, teleportation, healing, or even a buff to avoidance really do reinforce that nothing is ever simple. Fire Emblem always excelled at making you feel amazing, then devastated at losing a character you’re deeply invested in, and that’s no different in the first Switch entry. You’ll have something under control, but then a third faction will show up and give you something new to think about: it’s glorious when these battles go longer, it really is.

The story is long. There’s no point beating around the bush here. I said it’s borrowing from the Persona series, and that equates to length, too. That said, there’s only so much customization and terrific battles can do to stave off that lack of variety. Even when a mission pushes you far and wide on the map, you end up back at the monastery – the next day you’re a professor again, exploring the same corridors, rooms, and gardens. It’s a clash between religion and politics, and there’s a heavy dose of symbolism thrown in for good measure. Multiple moments feel strangely prescient for the times we are living through, so much so that even Ubisoft couldn’t claim this one is apolitical.

Three Houses is excellent, no question. I wouldn’t spend 50 hours in a game if it wasn’t compelling, which is in part thanks to the story that I wanted to see the resolution of. In truth, it’s difficult to know if I wanted to see “what happens next” or whether something would change up the formula. Fire Emblem has switched things up, borrowing heavily from Persona along the way. It does just enough to stick the landing thanks to a story that’s worth seeing through, and combat that is as brilliant as ever, but it wouldn’t have gone amiss to give a few extra exploration areas.

An engaging story and superb battle system keeps you coming back hour after hour, but Three Houses suffers from a lack of variety in the RPG sections.