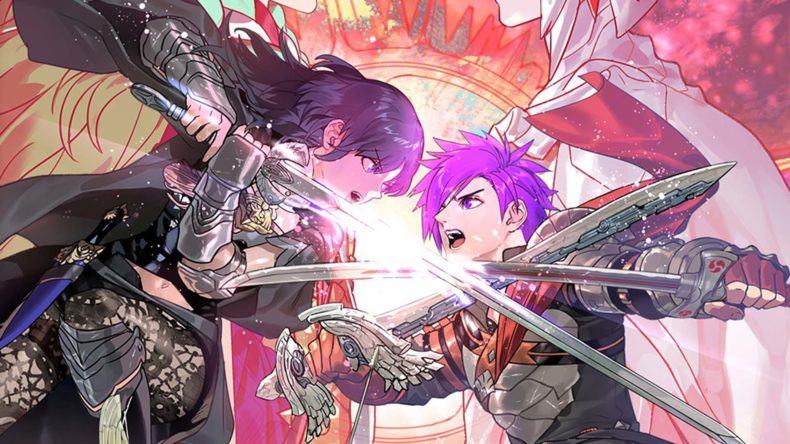 Even after my first playthrough of Fire Emblem Warriors: Three Hopes, I was still struck by just how much Fire Emblem it was. 36 hours later I had experienced a story potentially more epic than the original game, and so engrossing was the tale that, despite some RPG-based repetition that remains an ever present in the franchise, it left me wondering what the future for the series will actually look like.

Perhaps it’s not that big of a surprise really. Fire Emblem: Three Houses was developed with Koei Tecmo as well as Intelligent Systems, and while Three Hopes is very much an “alternate history” tale with the role of protagonist Byleth (who is part of this story, however) swapped out for Shez, a mercenary with a conscience, it’s only the tactics gameplay that is swapped for hack ‘n’ slash combat that has really changed. 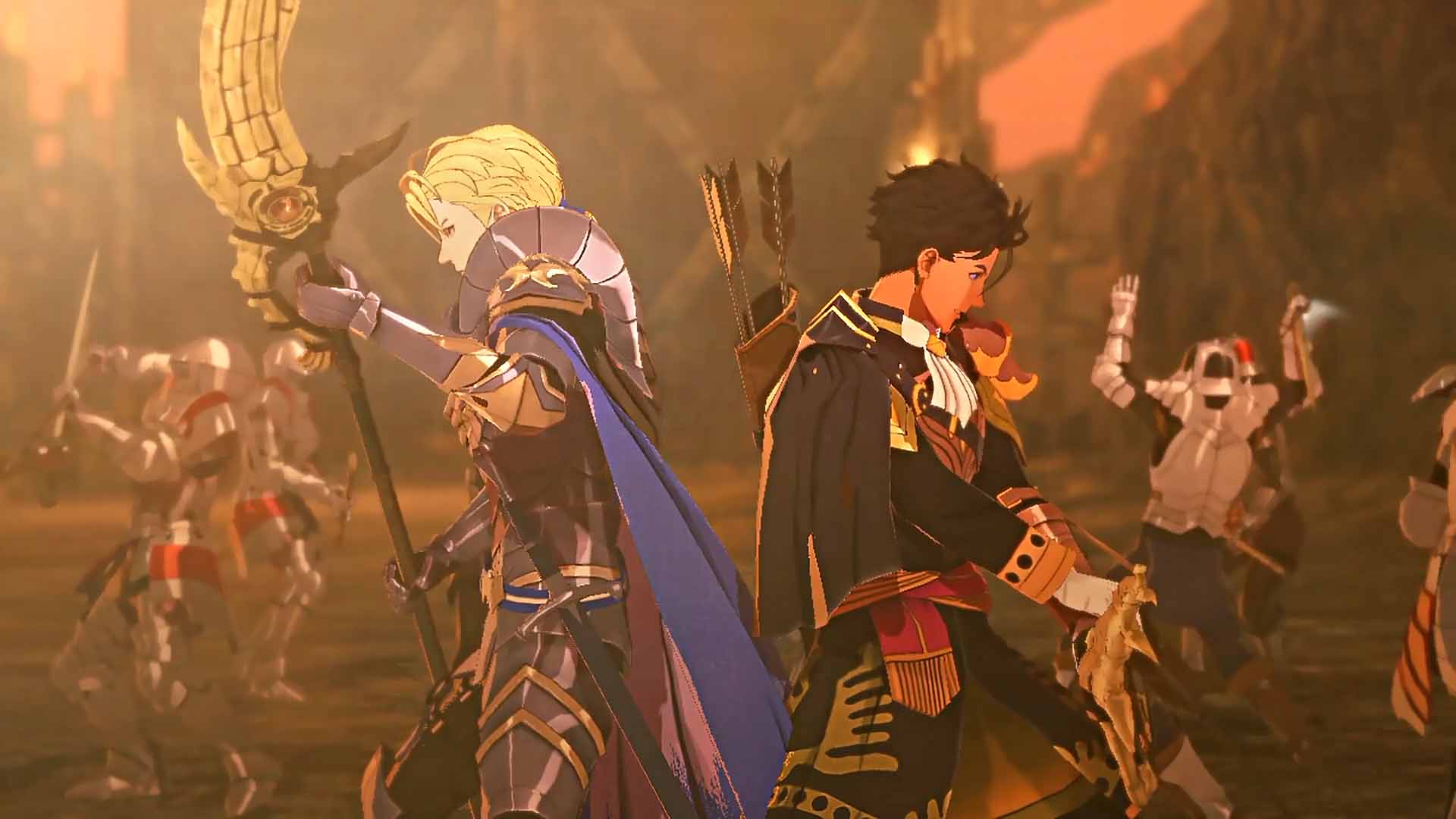 That is to say that there deep relationships built between characters; training to be done, weapons to be upgraded, classes to be mastered, hell, there’s even gifts to be bought and expeditions to go on which mirror the Three Houses romanticism, allowing you to delve into personalities and understand dreams for the future from each of the people in your party, creating a perfect conversation and then letting you stare lovingly at your favourite person.

And what a lot of people there are to get to know. If you’re a fan of Three Houses, you’ll be familiar with Dimitri, Edelgard, and Claude – three would-be young rulers of their regions within the larger lands of Fodlan. Just like in that 2019 opus, you get to choose which house you want to join, allowing you to control each party on your battlefield, levelling them up individually, mastering their abilities, and what they can bring to a fight.

This means that, yes, there are three campaigns. So that 36 hour runtime I mentioned earlier wasn’t just bragging, it was to make the point that, really, that’s just a third of the potential playtime, and even then that’s only if you discount the fact there are branching paths throughout each of the three factors. This is a monster game, make no mistake, just like its forerunner, and one that also throws a fair bit of repetition at you. Right after finishing my first, I was in for another go around, switching from house Dimitri to house Edelgard to see just how much the story varies. A by-product of doing this was that I saw just how much voice work and writing is present here: and it’s seriously impressive. 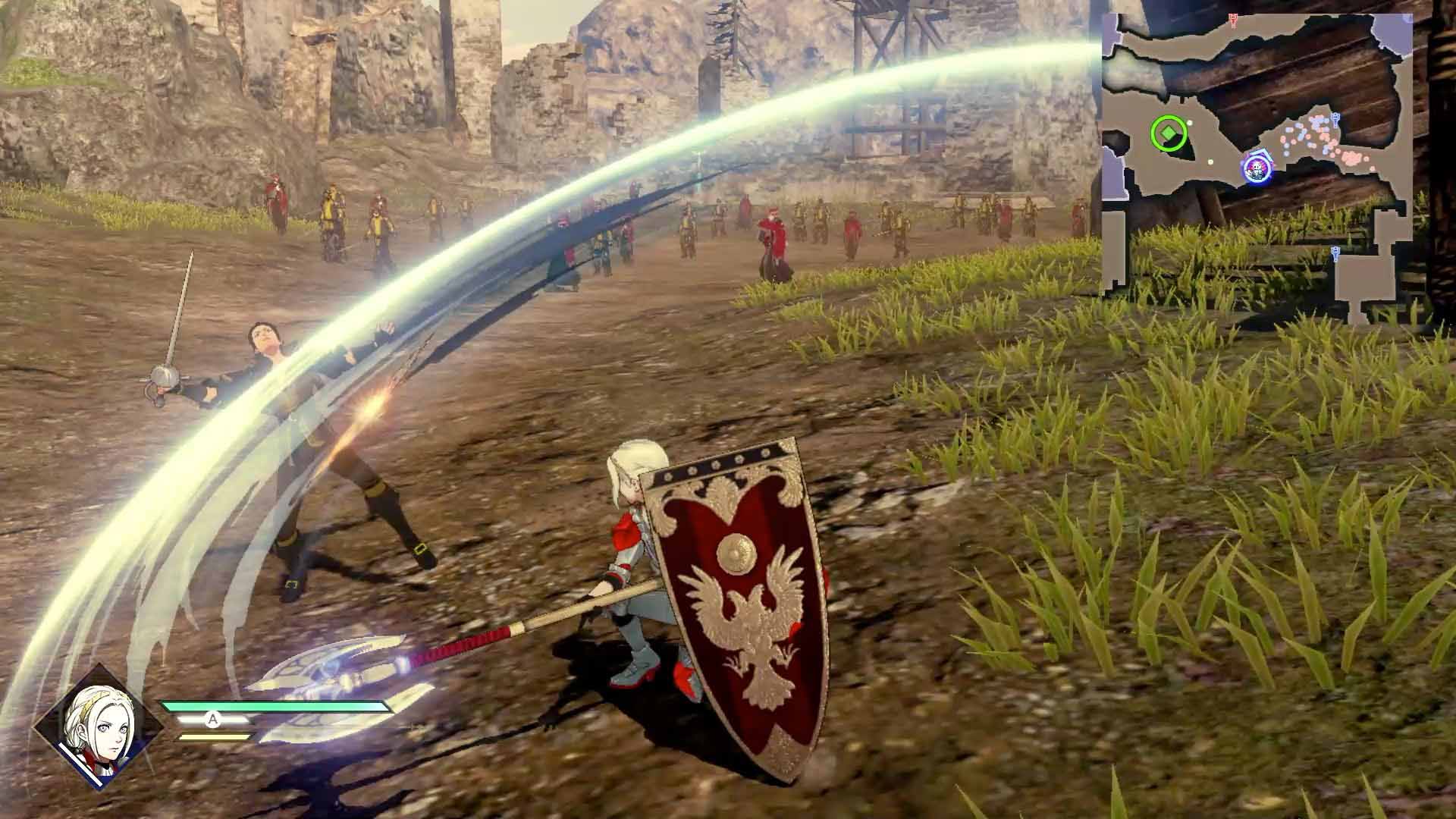 The combat does retain tactical elements you’d expect within a Fire Emblem title. You can direct members of your party to go seize a zone or attack an enemy completely separate of what you’re doing at any given time. You can go “all-out”, or “guard”, or just get the entire team to defend an ally. Switching is as simple as pressing up or down on the D-Pad, though I preferred to take a look at the tactical map and manually choose who I wanted to switch to, while also setting orders for who I was leaving behind.

While the musou genre has (fairly) been criticized for being a button mashing experience, Fire Emblem Warriors: Three Hopes does do something to try and change that up. As you progress through the classes, your combos will change, and every “finisher” you activate for a combo will be different depending on how much “mashing” you’ve done before. There’s a guard break mechanic in place which, once you see it, you can smash the hell out of the enemy to enable a critical rush. This triggers an anime-style visual cut across the middle, before your controlled character unleashes a flurry on the enemy, doing major damage.

Likewise, you can use your Warrior bar to perform your special move which, again, changes based on class. You can assign an adjutant to a playable fighter and this will mean you can do double the damage as they’ll both unleash a special. Towards the end of the game this can mean you’ll see damage numbers hit the million mark, and even 36 hours in, it remained satisfying to the last. It’s different from Fire Emblem Warriors, too, because the combat changes throughout the game. Whether it’s the skills a class or character brings to the table, or what weapon they’re using, but the amount of attacks, specials, and general ways to take part in the combat sections is vast. 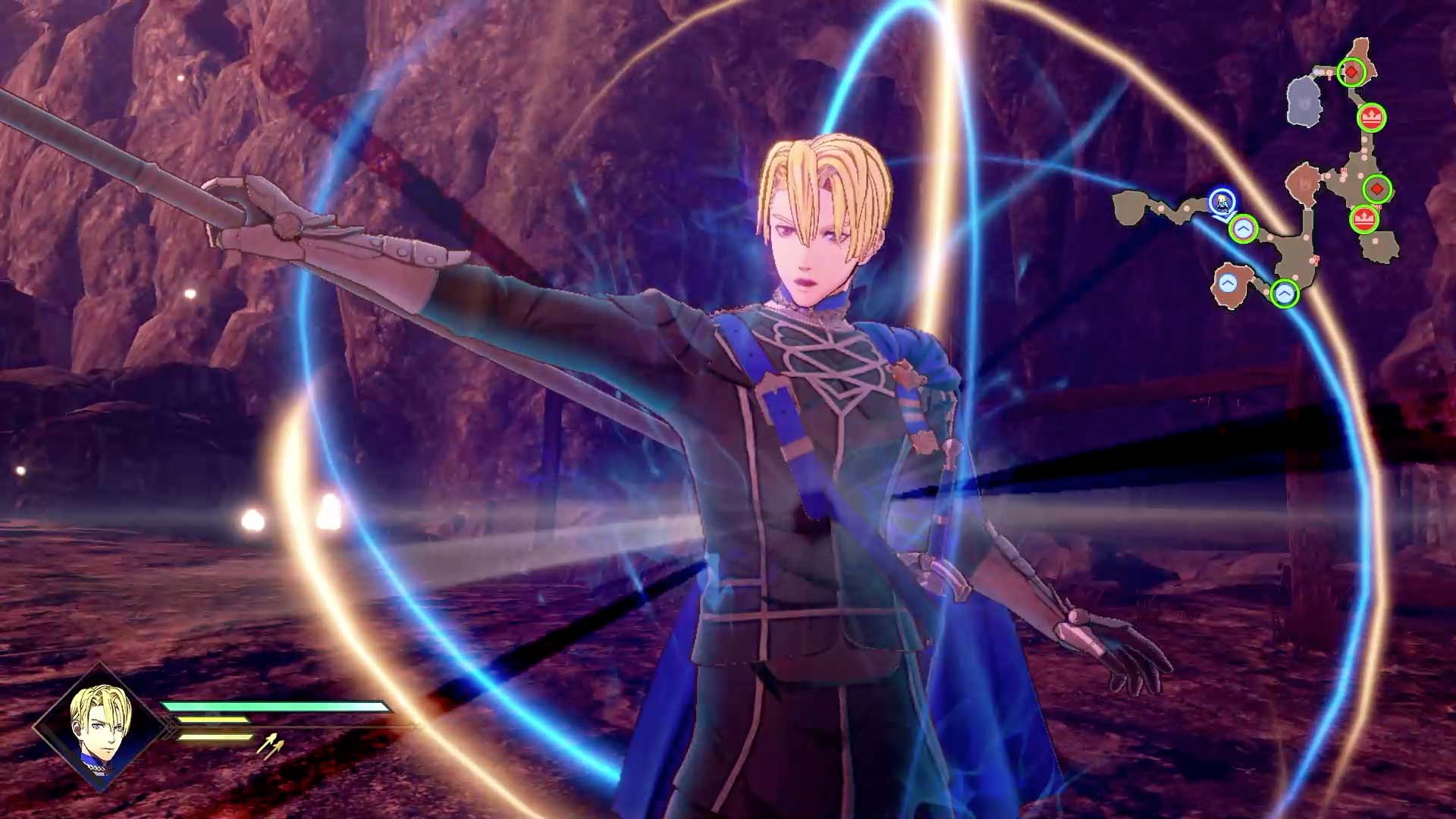 That said, you can expect to see the usual “musou environments”. Which is to say a grey fortress, a brown forest, and not much else in between. With the visuals keeping a (seemingly) constant 60fps when docked, the action is fast and furious, to the point where I wondered if people would walk past wondering what the hell was actually happening.

Fire Emblem Warriors: Three Hopes feels all about rhythm. You will start a mission, grab the nearest money pot, knock some enemies about, and then take your objective to task. There’s not a huge amount of variation: attack strongholds, defeat a general, protect the civilians or nobles, kill the monster: you get the idea. Towards the end, there’s a few too many failure conditions involving protection that I think could be frustrating on higher difficulties, but on normal, it’s not a particularly taxing experience, so long as you understand the mechanics.

Each chapter contains multiple battles leading up to the main story fight. You can take a critical path but you’ll miss out on so many resources and secrets along the way, it’s better to do at least the majority of the fights if you can. Moreover, completing the battles along the way rewards you with points to spend on tactical manoeuvres for the story fight. These can be as simple as lowering the health of the enemy, or as interesting as recruiting an enemy leader. You still have to defeat them, but once you do they’ll become playable in the next battle, and be part of your posse. 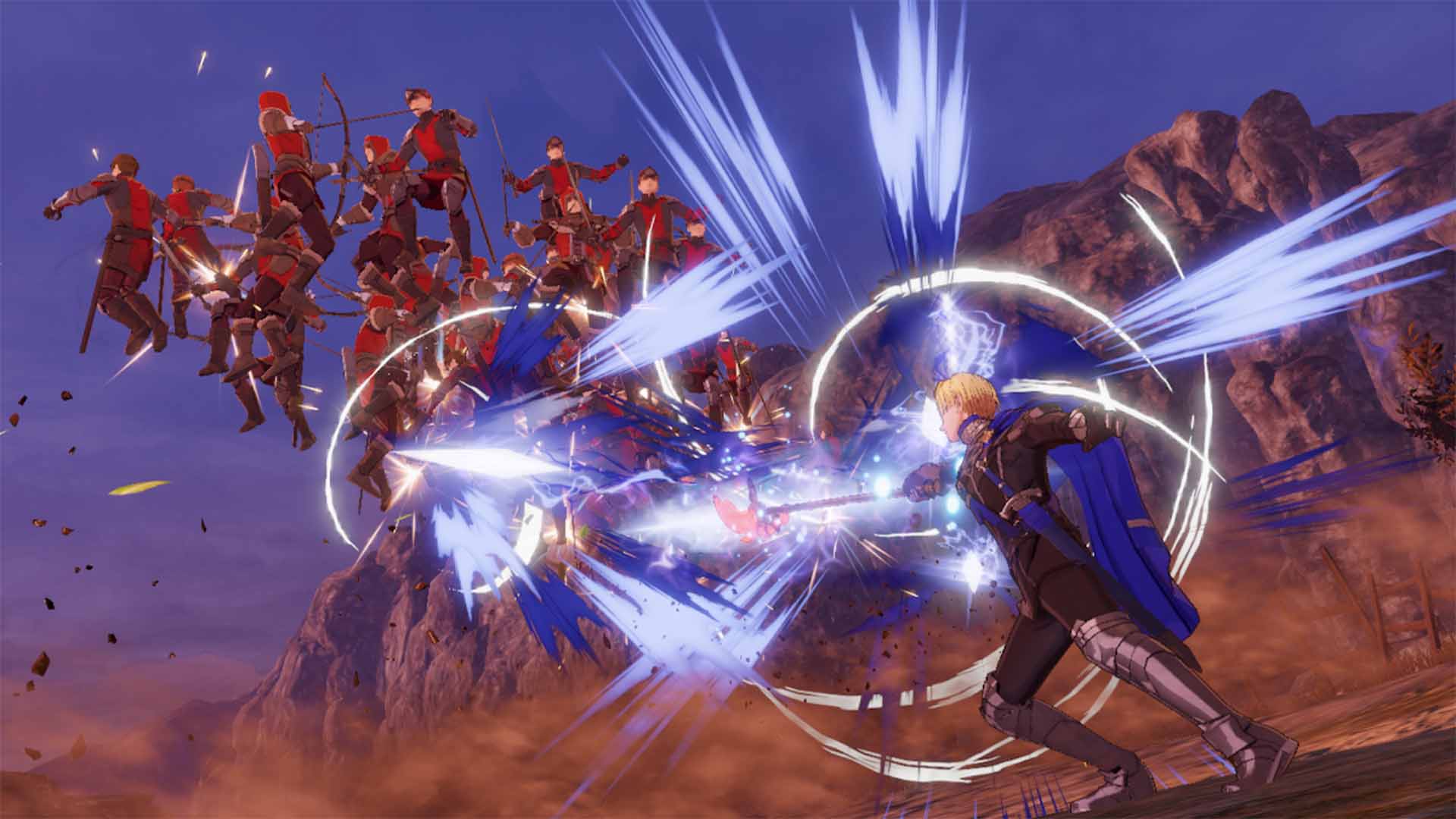 There is permadeath if you want the true Fire Emblem experience, mind you. This means that after chapter four, should someone fall on the battlefield, they’re dead. Narratively of course, this makes sense, but given how many enemy generals “retreat” when you’ve kicked them into the dust, it’s a bit cheeky to not allow the same courtesy to your playable friends.

Back in your base camp, everything you could expect from Three Houses is back for Fire Emblem Warriors: Three Hopes. You get activity and training points to spend as you see fit. This means you can cook meals with friends to get buffs for the future battles as well as improving the relationship with your chosen company. You can speak to everyone and advance smaller stories, learning about anyone as well. Right up to the last chapter I was tinkering with setups, weapon upgrades, and just trying to get my base upgraded to have everything on offer available to me. 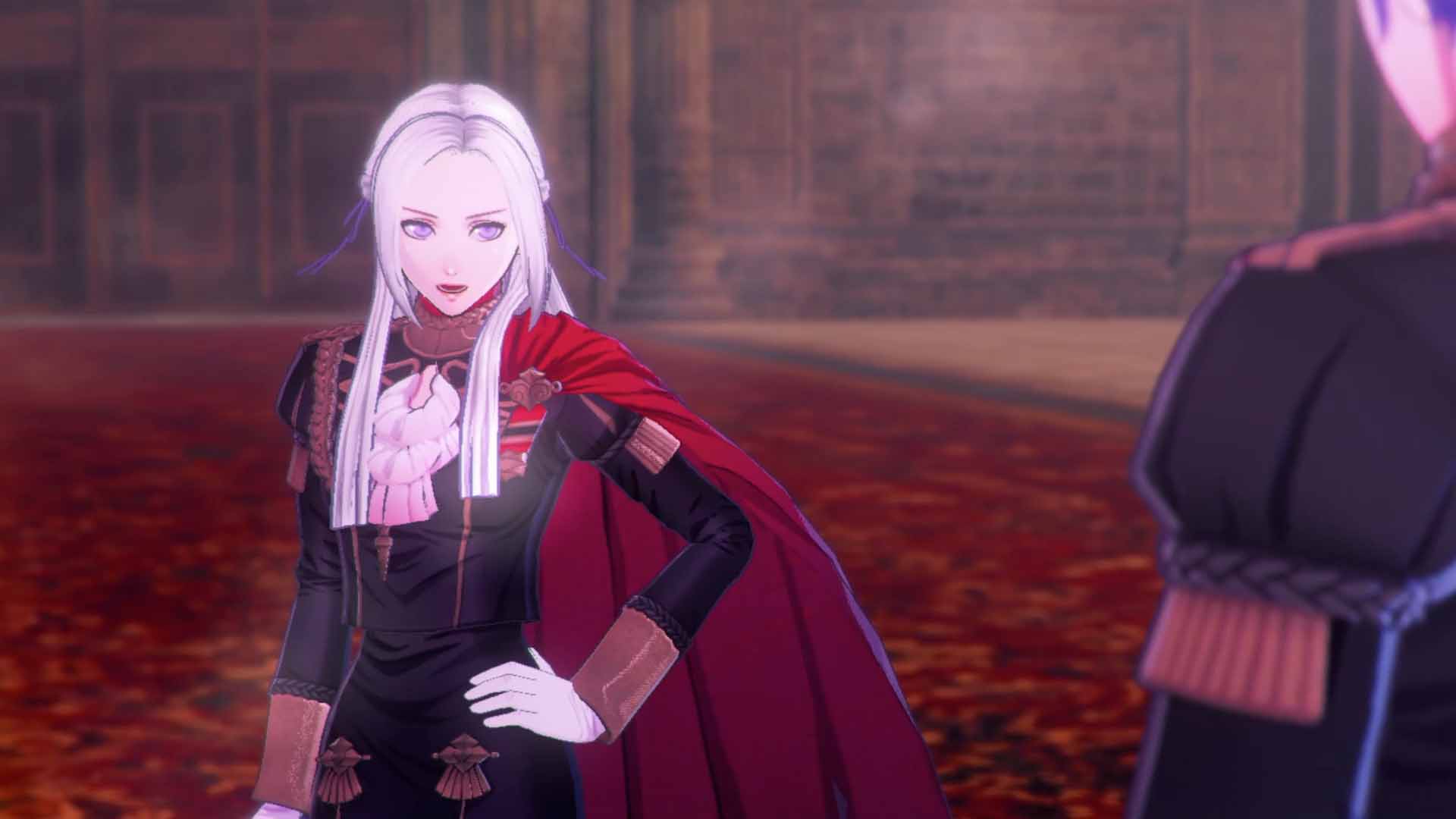 It’s also well voiced for the most part, and the soundtrack is enjoyable, too. There’s no question that Fire Emblem Warriors: Three Hopes won’t be for everyone. The repetition has to be something you enjoy, or it’s going to be death by a thousand cuts. I don’t normally fall for musou games at all, in fact, I’m not sure I’ve ever liked one, but there’s something about spending time with the friends I made back in 2019 again that caught my attention. It feels so faithful to what made that experience such an enriching one.

For every second I felt my enthusiasm waning for Fire Emblem Warriors: Three Hopes, I could just switch to one of my mages, or archers, or wyvern riders, and suddenly the experience would be freshened up again. While it eventually settles after introducing you to its myriad systems, I can’t guarantee you’ll feel the same way I do about this. But if you enjoyed Three Houses, I’d be surprised if spending more time with your favourite house didn’t hit the mark for you, and I’d also be a bit surprised if we didn’t start to see more hybrid Fire Emblem titles like this in the future.

Repetitive environments
Possible the definition of a “marmite” game