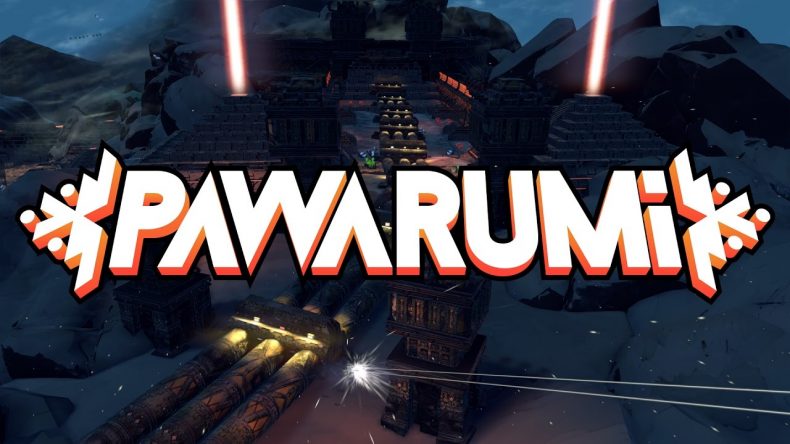 The idea of rock, paper, scissors mechanics in videogames has been with us for a while now, the idea that one thing is stronger than another, while weak to something else ensuring you need to really consider your strategy. The most popular proponent of this is the Pokémon series, and it’s an idea that I’m surprised hasn’t been worked into the shooter genre until now.

Pawarumi is exactly that, a rock, paper, scissors shoot-em-up with the core concept revolving around the three primary colours (for televisual displays at least: Red, Green and Blue). These in the Neo-Aztec world of Pawarumi are translated to Red Jaguar, Green Serpent and Blue Condor and not only change the weapon you’re using, but also the way your ship looks as they fire. But, things from a visual perspective don’t matter in the realms of shooters do they? The real question is, how do they change up the gameplay?

Well, I’m glad you asked, and even if you didn’t, I’m going to tell you anyway. As well as your weapons the enemies are also colour coded in the same way, you’ll need to change the way you use your weapons depending on the colour of the enemies you’re dealing with as well as your own situation. With the weapons there are three elements you’ll need to consider, Crush, Drain, and Boost and all three are clearly labelled at the bottom of the screen as you fire. So, what do these three terms really mean? What you need to remember is what colour does what, so Red enemies and week to Green, Green Enemies are weak to Blue and Blue Enemies are weak to Red. Are you with me so far? Following these principles allows you to ‘Crush’ enemies, dealing double the amount of damage. This is indicated at the middle bottom of the screen when you fire a weapon, as you fire the indicator will change to show which enemies will suffer double damage should you shoot them.

So, what of Boost then? Boost is the idea of how to recharge your shield, it’s fair enough dealing double damage, but anyone who has played a shmup knows that there are bullets flying everywhere and coming away unscathed is nigh-on impossible. So, if you stop with crushing for a while you can turn your attention to shooting enemies with a weapon that matches their colour, this then charges up your shields should you have taken a few too many hits. Once again this is indicated on the screen, but this time in the bottom left, with the colour once again changing to indicate the enemies you need to hit with the currently firing weapon to charge up.

Finally, there’s Drain, here you need to do the opposite of Crush, so that’s green weapons for blue enemies, red against green and blue against red, doing this charges up the meter in the bottom right corner which is for a shmup’s compulsory super attack. It fills up up to three levels and when fired releases a screen-filling missile barrage completely wiping out lesser enemies while doing major damage to boss types. It’s quite simple in theory, but I found it difficult in practice even with the iconography at the bottom, as I kept forgetting which button corresponded to what, for the record it’s Y for Blue Condor, A for Green Serpent and B for Red Jaguar while the super move is activated with X. Sounds easy saying it back like that, but when you’re also dodging round bullets like an Olympic skier on the slalom and there are multiple enemy colours on screen at once it can be easy to slip onto the wrong colour.

Overall it’s an excellent risk/reward mechanic, giving you the option of ensuring your survival by charging your shields, or if you’re confident in your dodging abilities the chance to wipe things out easier with the Crush ability. The thing is, I found the shield gauge a little slow to charge up, considerably more so than the super meter which will manage to get at least one level’s worth of charge after a few enemies. Managing this is difficult on the easy difficulty alone, but pushing onwards onto normal and hard sees the volume of enemies increase exponentially and by proxy, the amount of bullets too. This means that finding yourself confused as to which button you’re pressing is going to be deadly.

In all honesty, the only mechanics I found myself using most were Boost and Drain, I did not notice enough of an increase in damage output with Crush to make it worth using. By this I mean that enemies seemed to die at the same rate no matter which weapon I used, so I could concentrate more on ensuring my shields were charged and my super meter full just to ensure maximum survivability. It all looks great too, with bright garish colours and large chunky bosses, capped off with a great aztec inspired computerised UI and a suitably moody soundtrack, but otherwise there’s not really much else to the game. I mean, you’ve got the obligatory leaderboards, and as well as the amount of enemies and bullets increasing the normal and hard modes also see extra bosses between you and victory, so that’s even more opportunity for more points and gloating over your friends on those boards,and, to be honest, this is plenty considering the game’s rather pleasing price point.

Pawarumi then is a great new addition to shoot-em-ups, I don’t think it’s going to set the scene alight, but it’s certainly brought an excellent new mechanic to the genre if nothing else and for that it deserves your attention.

How this hadn’t been done before I will never know, but Pawarumi’s melding of rock, paper, scissors to a shooter is quite frankly, a blast.