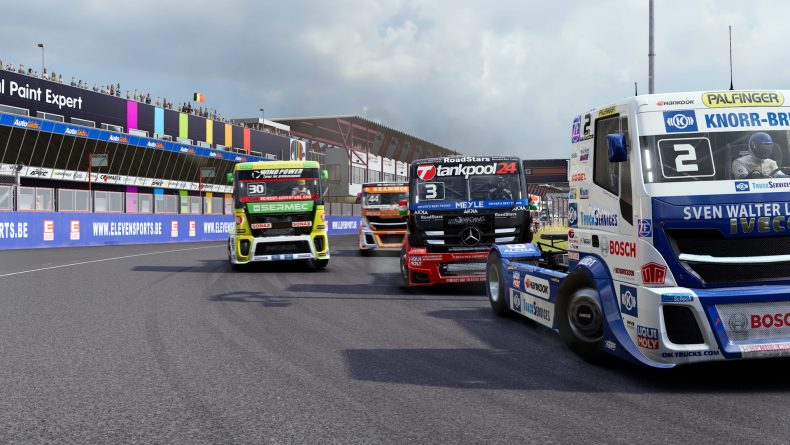 It’s not often that a racing sim comes along that doesn’t focus on the fastest, lightest racing machines ever built. In fact, it’s not often a racing sim comes along that features anything heavier than a GT car, let alone a game that features nothing but some of the heaviest racing machines out there. That’s exactly what you get with FIA European Truck Racing Championship, it’s not just about its catchy title. Doesn’t it just roll off the tongue?

It’s easy to turn your nose up at a truck racing game, as it’s not exactly prime time broadcast material like Formula One or the BTCC. A big, cumbersome truck hardly comes with the same appeal as a Ferrari 488 or an Aston Martin DB7, but I would encourage you to look past that, as this is actually a rather enjoyable racer.

Sure, it starts with way too much talking, as the announcer simply refuses to shut his bloody mouth. His unskippable tutorial waffling goes on and on, before, during and after the initial race that gives you a quick hands-on with your first truck. It gets worse when you try to start career mode and he talks you through every single feature, even the stuff that 99% of players will never take any notice of, if we’re totally honest. Thankfully, he eventually shuts up, but long after you’re tired of his rambling. Let’s get another complaint out of the way, shall we? When you do start a career, you are forced to complete a series of tests in order to earn your racing licence. Unlike the famous Gran Turismo tests in the original game, the ones here offer no guidance and can easily be failed if you make a slight error in your calculations. Annoyingly, there are some in which you can spend time reaching the end, only to find you caught a penalty pole which causes you to fail the whole test. Meanwhile, other failure conditions will instantly stop the test. Why not do this for all failures, instead of wasting the player’s time completing the course? It may seem like a minor issue, but all of this is mandatory before you can even compete in career mode. You literally cannot move on without enduring these tests.

When you do get into the career and choose whether to go European or join the World Tour, each with their own set of trucks and gameplay challenges, things take a turn for the better. Once you’ve chosen your difficulty level and race length, you can jump into a truck and choose you first event from the calendar. Some are simply practice events, which allow you to learn a particular track (there are a few with which you’re probably unfamiliar), but once you head into a race weekend it all begins to come together.

Race weekends are made up of a practice session, qualifying (with the top ten going through to the Superpole to attempt to qualify for first place) and two races. The results of the first race will determine the starting grid for the second race, albeit with positions 1-8 reversed, so winning race one will mean you’ll start race two in eighth place. This is repeated for day two of the weekend. So far, so samey, right? Once the race gets going, things become a lot more strategic than most sim racers, as these massive trucks aren’t normally built for this kind of thing. They’re heavy and their brakes overheat massively, which is why you need to periodically spray water on them after heavy braking zones. It may sound simple, even tedious to some, but it genuinely adds an extra layer to the gameplay. It’s surprisingly difficult to concentrate on cooling your brakes while trying to make a decisive overtake, you know.

The races are quite intense, especially if you’re starting mid pack. The AI is a weird one, as it’s both prone to making mistakes like real drivers and also incredibly aggressive to the point that it often doesn’t adjust its direction in reaction to other vehicles. This isn’t so bad if you’re in an exhibition race and have the ability to switch off penalties, but in career that’s not an option. If a truck ahead brakes out of nowhere, or there’s a bit of a collision and you can’t react in time, the resulting collision will earn you a 5-second penalty to added to your overall race time. If you’re pushed into a penalty pole, that will earn you a 30-second penalty. There doesn’t seem to be any wiggle room on these penalties either, to the point that I restarted one race several times because the AI kept shunting me everywhere and causing me to earn these time penalties. It was rather frustrating.

It’s doubly frustrating because there is some excellent racing to be had in FIA European Truck Racing Championship, when the AI behaves itself. The handling is smooth and easy to get to grips with, while being heavy enough to feel like you’re at the wheel of a proper truck. It’s not about hitting 200mph (indeed, there’s actually a speed limit of 99mph) but that just encourages proper racing and also ensures that these big machines don’t careen through barriers, causing ridiculous amounts of property damage. It doesn look half bad, either. The trucks are all nicely detailed, bodywork crumpling and paintwork scratching up realistically, but it’s the lighting that really shines. Ahem. During one sunset race at Laguna Seca, I found myself surprised at the gorgeous lighting effects and the deep shadows, all without HDR too. Sure, it’s not exactly troubling GT Sport in the looks department, but it’s still mighty impressive.

If it weren’t for the AI issues and the penalty system being far too strict and unforgiving, I think FIA European Truck Racing Championship would be one of the biggest surprises in the genre. Its racing is fun and visceral when it isn’t shunting you around and penalising you for the mistakes of others (the AI does actually make proper mistakes), and if you can overlook that then I reckon you’ll have a good time.

Despite some aggressive AI and an unforgiving penalty system, FIA European Truck Racing Championship is a solid and highly enjoyable racing sim