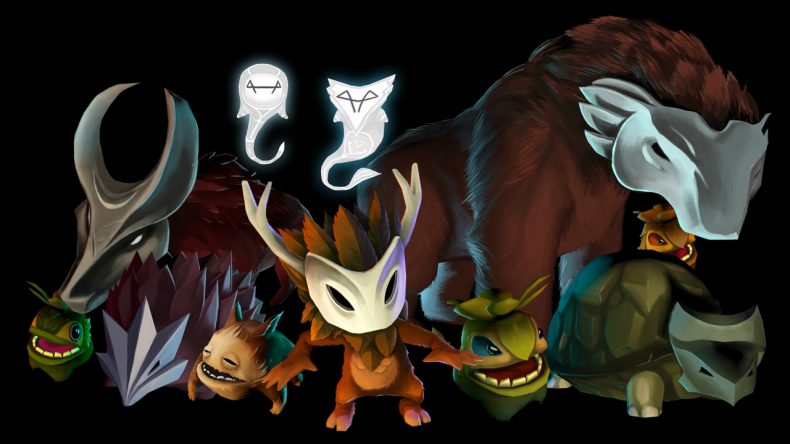 Bringing light to dark places has been a solid gaming theme for decades now, and is the reliable, well-understood base upon which Forever Forest sets out its stall. A narrative metaphor for good over evil which we can all get behind is never a bad idea, even if the title of your game reads like a tattoo that a Nottingham-based football hooligan might choose. Playing as a woodland creature, your role in this top-down exploration title is to bring light to the temples of the forest, progressing North as you do so, overcoming more challenging enemies and acquiring new abilities in a bit to rid the world of darkness, while trying to stay alive.

The first deliberate thing you’ll notice is that you’re wearing a mask, and these masks form the basis of progression in Forever Forest. By defeating monsters that also wear masks, you obtain them to add to your collection. You can then exchange a certain amount of specific enemy masks for a new mask that you can wear yourself. This mask will give you new abilities that either give you a perk or make you stronger for tougher challenges and enemies ahead. The controls are fairly simple in that you can move freely around the forest with the left stick, and then a press of a button will see you do a lunge attack that you use to deal damage to enemies. Whilst the button press will always lunge you in the direction you are facing, using the right analogue stick as an alternative control will roll your character in the direction the stick was pushed, giving you more precise movement options. There’s a cool-down meter for your attacks, and as some enemies require multiple hits to kill and may attack you in the meantime, the lunge also doubles up as a dodge-roll for incoming attacks, making management of your movement that little bit more complex. So how does it play in practice? Well, unfortunately, not brilliantly. The biggest frustration comes in the form of the performance issues it suffers from. In a bid to stay true to its name, Forever Forest is randomly generated, and expands indefinitely to the East and West, but unfortunately because it seems to be working so hard to make this a reality, it impacts your ability to play the game. There’s so much lag, so frequently, that the simple control method I described becomes a frustrating mess. Nothing is more irritating than lining up a lunge attack to finally take down that powerful enemy, only for your attack to miss because the game has jumped forward, and the enemy moved. Worse still is when you’re on the defence and trying to time dodge-rolls that happen a second later than you need them to, to avoid damage.

I also found myself confused with what to do initially. Whilst there is a pretty good tutorial, I still found myself at the start wandering around with not a clue about how to progress further. As it turns out it was because I got myself confused with the difference between shrines and temples, and also misunderstood that markers on my map that looked like animals weren’t actually denoting a group of masked enemies to go and kill but in fact a certain type of shrine, which enemies tend to congregate around. Once I had that clear in my head, everything opened up nicely, but it felt unnecessarily convoluted, and the design of the menus with headings replaced by symbols just made my initial confusion even more aggravating.

There’s a survival element as well, with a hunger meter that depletes over time; if it reaches zero it begins to reduce your health, leaving you at risk if an enemy attacks. Staving off hunger is done either through the killing of smaller non-masked critters that litter the forest floor or consuming the many berries lying around. As well as giving a brief hunger bonus, these berries also add different bonuses such as increased movement speed or lunge reach. Up to four different types of berries can be stored at any one time and can be accessed on the D-Pad. It adds another layer of skill and planning on top of the real sense of danger and survival that the hunger meter provides. Also behind one of the menus there’s also a list of little challenges to sink your teeth into, some of which ask you to kill a certain amount of certain enemies or simply survive for a certain length of time. They provide an interesting level of challenge besides the main experience, even if there’s little reward for doing them. Forever Forest is quite atmospheric, with its lovely art style and nice lighting effects and it can look quite beautiful on occasion. Also you really notice the dark when you move into a new area that has yet to have its temple illuminated. You’ll find yourself more on edge, wary of even the smallest creatures as your visibility is reduced. Your eyes will also be more focused on finding those berries to stay alive, driving a sense of peril that altogether dissipates once the light is restored. This clever use of light compliments the soothing backing sounds and music that accompany the game, creating a serene environment to roam around in as you discover and overcome your enemies.

However, those performance issues really do mar the experience, and coupled with the repetitive gameplay (kill enemies, get masks, open up temple, repeat), you’re far more likely to want to give it up, despite the draw of the way it looks and sounds. As such it’s better played in short bursts, which is ideal on Switch, but there will still be a nagging frustration that Forever Forest should be offering you a bit more. Yes the progression is interesting as you gain more masks and access to more difficult areas, and the challenges are engaging to a point, but you’ll be left annoyed with each lag experience as, at best, it detracts from the atmospheric setting, and at worse influences the outcome of a fight with that tough enemy you’ve been after for the last twenty minutes. Really, it feels like a title that needed a bit more time in development, to iron out its kinks. With the lag removed and more varied gameplay elements unlocked as you progress, this could have been a decent indie release on Switch. However, as it stands it feels a little rushed, and falls short of where it needs to be.

Forever Forest looks and sounds nice, but that unfortunately masks a game with performance issues and repetitive gameplay that will put many people off.