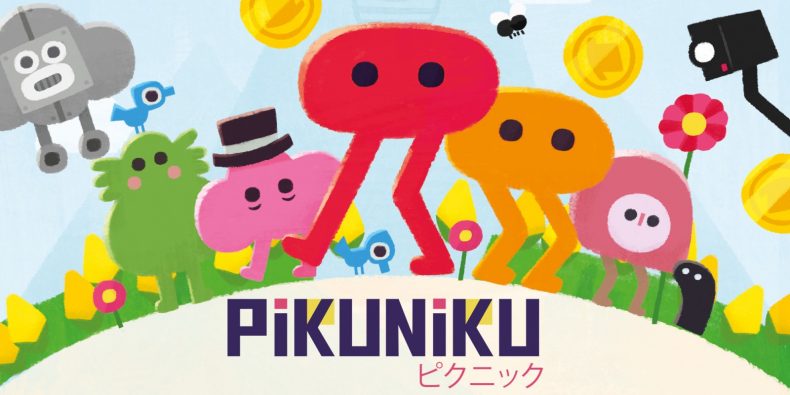 Dystopian tales are often depressingly “mature” games, aren’t they? Usually covered in a crispy coating of drab, dark visual styles, to boot. Who would have thought, then, that a game with a visual style resembling the PSP classic LocoRoco, coupled with the humour of Katamari no less, would come with such a dystopian flavour? I’m not sure why I went with the food metaphor, but then, I never found my time with Sectordub’s Pikuniku actually made sense either.

That’s not to say that it needed to make sense for it to work. Quite the opposite, in fact. Pikuniku revels in its bizarre nature, from the very beginning when Piku is awakened by a ghost inside a cave, all the way to the game’s amusingly odd ending. Pikuniku is a side-scrolling, 2D platformer set in a colourful world full of wonderfully weird characters. You start by jumping, rolling and kicking your way out of your cave in the side of a mountain, before heading down to the village below, where the inhabitants believe you to be a “beast” and flee in fear of your terrifying form. Except that Piku is actually a bright red oval with long, spindly legs. Not in the least bit frightening. Well, the more I think of it, the more I realise that if I met a big red oval with long, spindly legs, I’d probably want to run in the opposite direction too.

Soon after this introduction however, I found myself exploring the world of Pikuniku and enjoying its simple brand of platforming and its quirky sense of humour. Sunshine Inc. is giving out free money to the people of the world, only taking a few resources in return, but things aren’t quite as they seem and soon you’ll be dragged into a story of conspiracies and rebellion, as well as a few side-quests that will likely raise a smile. Pikuniku is billed as a 4-5 hour game, though the main story will probably only last you half that time. You’ll have to make your peace with that and decide whether it’s worth the price of entry, but rest assured that there is plenty of content beyond the main quest, with side-missions and minigames littering the semi-open world. Most of these are funny and charming, but there are a few that offer genuine challenge, such as Toastopia that provides a more difficult platforming experience, possibly as a parody of Super Meat Boy.

Parodies are littered throughout Pikuniku’s world, as well as funny and entertaining minigames such as the dance-off with a robot, which is only accessible once you’ve found something “cool” to wear in order to gain entry to an exclusive nightclub. You’ll often find new hats and objects that allow you to perform new abilities, but most of the game’s puzzles are physics-based, requiring moving objects onto switches, for example. This is where the main frustration of the game comes into play, as the physics aren’t always helpful. One quest required me to move a very gelatinous blob-worm through a series of rooms, but it would often not move when kicked, or in one particularly annoying moment involving a fan-like contraption, it would randomly move in entirely the wrong direction. This is always a problem with physics puzzles in games and thankfully it doesn’t spoil the experience too much, but it does become a pain sometimes when the game simply refuses to cooperate.

With its gorgeous art style and fantastically quirky writing, Pikuniku is an entertainingly bizarre game that will make you laugh throughout its short length. You will likely find yourself playing beyond the ending however, enjoying the minigames and side-quests that litter the world, or simply laughing hysterically as you kick everything and everyone in sight.

Main story is a bit short
Some awkward physics puzzles

Pikuniku is quirky, funny and more than a little bit mad, all adding up to a short-but-sweet, colourful platform adventure.