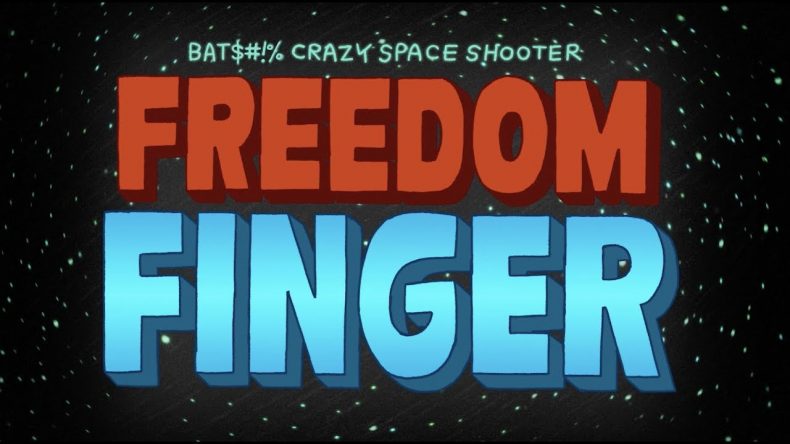 Freedom Finger is a weird one. I mean, I’m all for sophomoric humour, which is a pretty word for stupid shit 15-year-olds find hilarious. I was 15 once, and while most of me aged like sour wine for the following 23 years my sense of humour was too busy lying agonised in a puddle of sick after “experimenting” with cognac to get the memo.

Suffice to say that when I’m not doing my level best to behave myself in either the polite company of my IRL persona or the dagger-waving lynch-mob that follow my online persona around, I can act the prat as well as anyone else. Better, in fact. So my immediate reaction to Freedom Finger was one of silly childish glee at the sight of a spaceship shaped like a big Fuck You and piloted by a hero named Gamma Ray. But upon playing the game for the first time I found myself torn like a pair of skinny jeans when the onion bhajis kick in. In one leg I saw merit in the gameplay right from the off, as you control said giant finger to shoot, punch, grab and throw a cavalcade of enemy ships, mechs and randomised bric-a-brac into oblivion. But in the by-now shapeless denim confines of the other leg I wondered aloud how one game could get away with being intentionally racist and sexist while another game might be thrown under the proverbial bus for the same shit on a different day. I pondered this conundrum for some time before realising that if no one else was giving half a shit I might as well not and besides which, Nolan North is in it.

So the not-at-all-inflammatory plot sees non-descript yet absolutely-Chinese Chinese terrorists kidnap a bunch of VIPs including the President and hold them prisoner on the moon. This is related to you by Mr North, who’s gruff General is as far as can possibly be from Destiny’s Ghost while ostensibly fulfilling the same role. Your apparently largely incompetent hero, Gamma Ray, is tasked with nuking everything that stands in his way and rescuing the President, et al. It’s a simple premise, and one that makes as much sense as the whole “spaceship shaped like a well-flipped bird” thing.

While the gameplay is as fun as any competent 2D shooter despite suffering from occasional bouts of bullet hell, what really saves Freedom Finger from obscurity is the classic rock soundtrack that booms and bangs and rocks and rolls in the background, making rough, consensual love to your eardrums while you throw rocket-powered shotguns at walking battle tanks.

If you’re going to go down the South Park route of being essentially offensive to everyone, it can be worryingly easy to go “full Cartman” but Freedom Finger pulls up just shy of ploughing into that particular pile. While grouchily complaining about his ex-wife and calling you a Fuckstick when you die, the lovably hateful General will also lead you through each area, providing guidance in regards to slapping switches to open routes or which enemies to throw and which to punch. Some can be grabbed, such as the aforementioned rocket-powered shotgun, and when you have a hold of them you can misappropriate their bullet type, which works the way temporary alternate fire works in any other shooter.

The cartoonish, hand-drawn aesthetic is like the icing on Freedom Finger’s sticky little cake, ensuring that you remember at all times that its needling humour is meant to be just that: humour. It seems built to offend, but offend mildly rather than start any riots or, heaven forbid, serious discourse regarding its themes. It’s a game literally about showing the middle finger to people who take things too seriously, a risky move which could easily have backfired had the game not actually been very fun to play. As it is, it’s an enjoyable little indie that gets away Scott-free with things that might crucify a AAA title, and provides a few hours of tongue-in-cheek, utterly knowing humour at the same time.

Nothing unique
Some humour misses the mark
Will certainly offend someone

Freedom Finger is an enjoyable little indie that gets away Scott-free with things that might crucify a AAA title, and provides a few hours of tongue-in-cheek, utterly knowing humour at the same time.