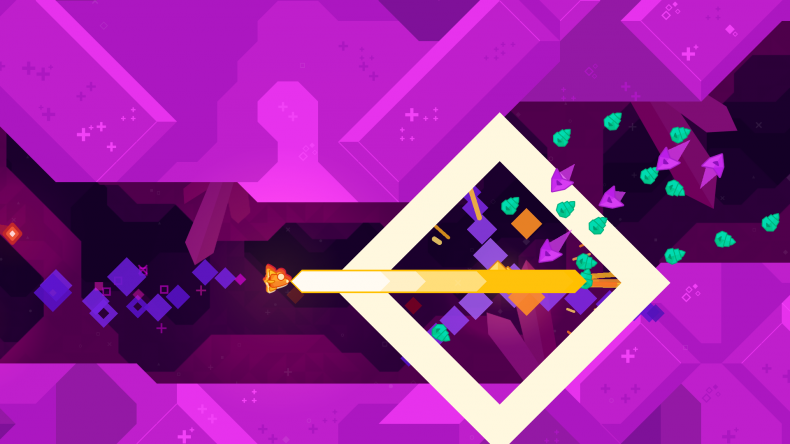 When a new system launches, everyone wants more games on it. When the Switch launched back in March, it surprised most people and has turned into an amazing platform for a variety of genres. Having your game launch early in the launch window will have more eyes on it because people are more willing to try out things they might not have in other situations. Graceful Explosion Machine is exactly one of these kind of games.

Vertex Pop’s arcade shooter impresses me in many ways. It is colourful, has precision controls, and an addictive core gameplay loop. It satiates my pickup and play arcade need on the Switch in both portable and docked modes. When you begin, you’re slowly introduced to each of the four main weapons. These are all controlled by the face buttons and there’s always a small set of icons in the UI on the bottom right reminding you what each one of them does, if you’re returning to the game after a while. The shoulder buttons let you switch direction from left to right or do a dash in the direction you’re facing. I expected a nice looking arcade shooter but was blown away by the interaction between various weapons, their timing, and getting used to different kinds of enemies. Everything works brilliantly together and the controls are sublime. I’ve put in more time in portable than I have in docked and HD rumble makes the explosions more satisfying. Having access to four kinds of weapons including one basic gun that has it’s own charge gauge allow you to experiment quite a bit during hectic levels. Some situations warrant using the missile barrage while a tanky enemy with loads of health deserves the charge beam (that has a great rumble effect while in use). As you play more, enemy patterns become more apparent but the appearance of more of the basic enemies around makes you change your strategy on the fly. All of this results in some lush colourful explosions.

Visually, Vertex Pop has done a fantastic job here. The UI is great and has some very nice subtle touches like your health being represented by a bar with three sections and a smiley face that becomes sad with lower health. The newest update even added a nifty stats screen and an AI controlled screenshot feature. I’ve taken loads of screenshots in crazy situations but I’d be lying if I said I didn’t nearly die while doing it. The stats screen tells you the amount you used each weapon in the level, your score breakup, and other details. There’s also a subtle glow around your ship that is very nice which complements the ship being the highlight. Robby Duguay’s soundtrack is pretty great. The sound effects fit right in with the electronic score when you’re playing and destroying tons of enemies. The good thing about games with leaderboards and scores is the difficulty isn’t really a problem even for people unfamiliar with certain genres. Veterans will spend time trying to get an S-rank or finishing levels quicker than others while everyone else can just work on enjoying the music, visuals, and taking care of the enemies in the three phases of each level. I hope there are more levels added in the future because this game deserves it.

Getting this on the Switch on a whim paid off big time because games like this are perfect for pickup and play action on the go. I just wish the level design was more varied.

Could use more level variety

Graceful Explosion Machine is a must play for arcade shooters with its precision gameplay, accessibility, and presentation.