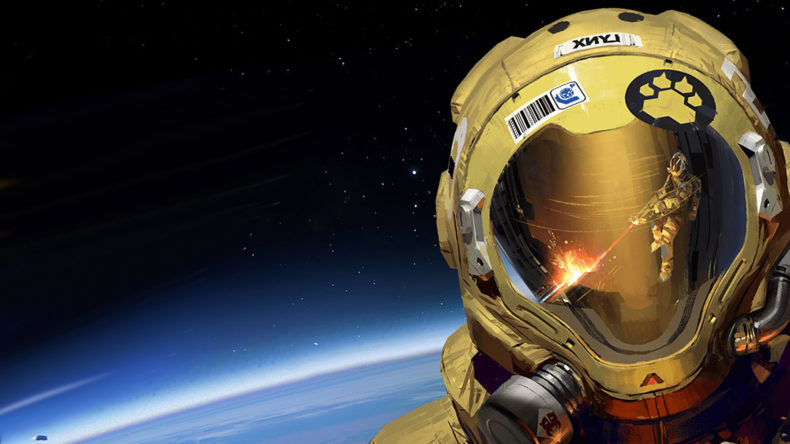 There’s something immensely satisfying about destroying things. It can be cathartic to take a sledgehammer to an old shed, smash porcelain dolls with a baseball bat, toss unwanted furniture on a bonfire. Game developers cottoned onto this a while back, with titles like Red Faction or Battlefield recognising the sheer joy that comes from tearing things down. And now Hardspace: Shipbreaker, from Blackbird Interactive, scratches a very similar itch, if in a more subdued way.

In Shipbreaker’s dystopian future, Earth is a mess and the space around it is littered with thousands of junked spaceships worth millions in reclaimed materials. You play a Cutter, newly employed by the exploitative Lynx corporation, who specialise in the incredibly dangerous field of spacecraft salvage. Your job is simple on the surface: tear apart derelict vessels for valuable materials and components. 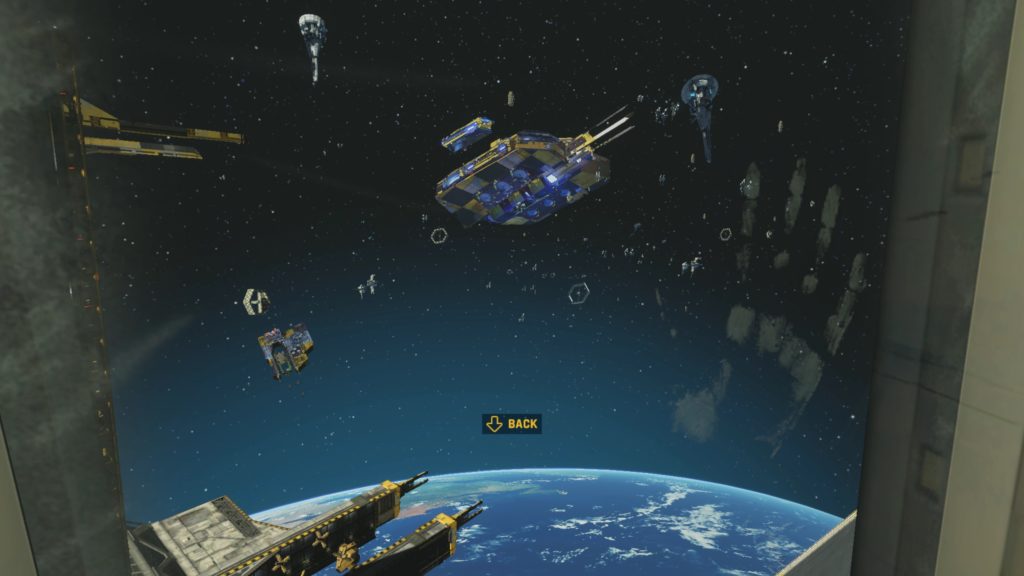 Lynx is a nightmarish company, playing close to the themes seen in games like Outer Worlds where corporations are king and people are nothing but assets. The first thing you do in the game is sign a contract and allow yourself to be genetically copied (which destroys your actual body), so that Lynx can clone you if you die. Each clone costs over a million credits, and it all adds to the insane debt you run up just to work for Lynx.

You begin the game 1.25b credits in debt, and everything you do either brings the debt down or adds to it. All your equipment is loaned to you, or bought by you, and emails, dialogue and flavour text reveal a truly terrifying company that feels exaggerated but scarily prescient at the same time.

Guided by veteran Cutter, Weaver, and a crew of workmates operating out of nearby salvage stations, you set to work on huge ships, cutting parts away and depositing them in one of three receptacles. Valuable material like Nanocarbon must be processed, expensive components such as navigation computers, power cells and fuel canisters are sent to the Barge, while scrap metal and waste has to be sent into the furnace. 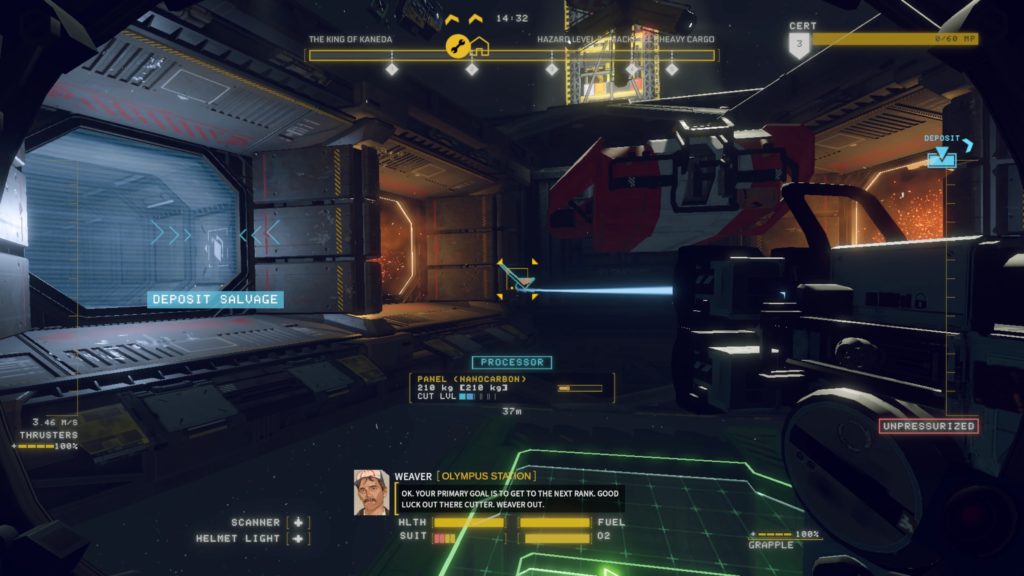 A grapple device allows you to move large pieces around the area, and as you’re in space it often only takes a nudge to send items on their merry way. Early on you’ll unlock the ability to tether items together, either to hold them in place or to expedite the salvage job by processing chains of multiple items all at once.

What begins as a fairly laidback experience slowly, almost imperceptibly ramps up. You’ll need to keep an eye on your thruster fuel, oxygen levels, as well as the condition of your tools, suit, and helmet. The first few boats you cut apart are simple enough, and you’ll only need a few 15-minute shifts to salvage everything. The more you reclaim, the more XP you gain, which allows you to rank up and buy upgrades with Lynx Tokens.

Soon, though, you’ll be tackling more intricate jobs. Later ships will have working electronics, or they will be fully pressurised, requiring you to depressurise compartments or risk blowouts that damage the ship and could kill you fast. Accidentally cut a fuel tank and you’ll be blown to pieces, or set off a Reactor and watch your entire salvage job get nuked in moments. And yet, the most important thing these elements do is add atmosphere. 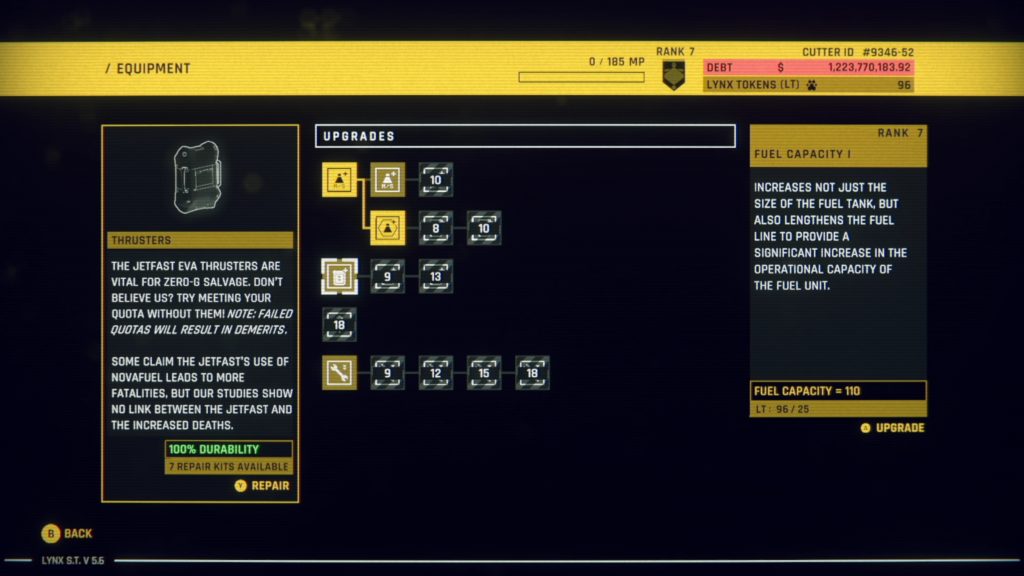 Hardspace: Shipbreaker feels like a job, sure, but one that you will get noticeably, demonstrably better at. My first few jobs I flew too close to the Processor and the subtle tractor beam effect dragged me to my doom. Once, I cut straight through a fuel line and blew myself up. I cut through the window of a pressurise cockpit and the resultant blow-out smashed my helmet. Hell, once I straight up ran out of oxygen and didn’t make it back to the Master Jack before I suffocated.

But after a few jobs you’ll remember these things: you’ll start to be aware of your surroundings, how close you are to the Processor, the angle of your cutting tool. You’ll become methodical, removing the outer sections of the ship first, depressurising each compartment, disconnecting electrical supplies and using your tether to speed up the process.

Quite a ways into your career, you’ll start to harvest ghost ships, and the game takes a turn towards sci-fi horror. Onboard these vessels, AI nodes can control all elements of the ship, from doors to lights to electrics. They will attempt to stop you, locking you in darkened rooms or even setting off their own reactor cores. Audiologs found in these ships tell tales of AIs gone rogue, or mysterious boarding parties wiping out the crew. You never find bodies, just discarded helmets that tell parts of their own stories. There are also collectibles hidden in some ships, such as cuddly toys or posters for your Habitat. Challenges and milestones unlock stickers to decorate your tools. 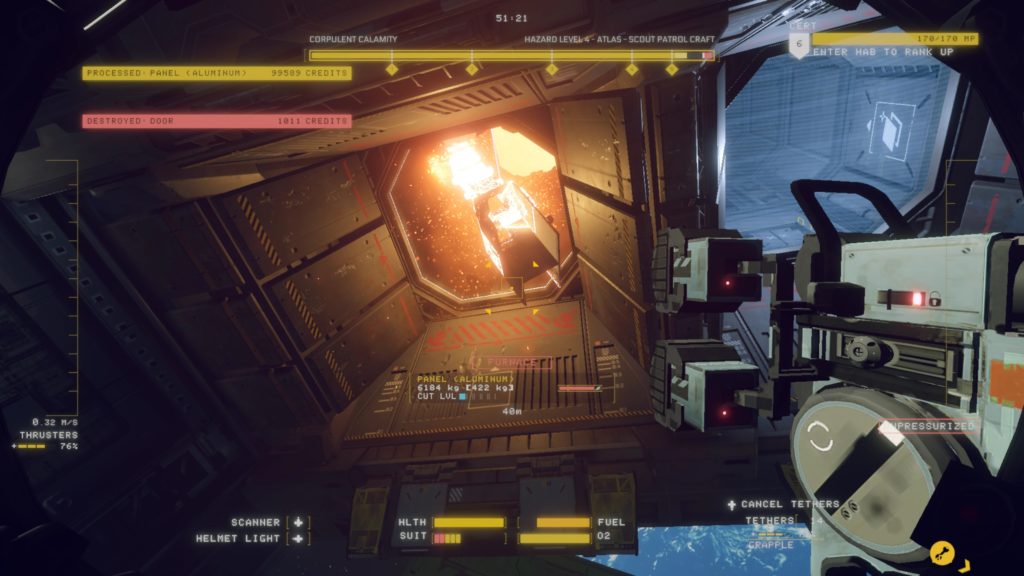 There’s something incredibly satisfying and compelling about Hardspace: Shipbreaker. If you want a more relaxed time you can just go into Free Play mode, or launch a campaign with unlimited oxygen and the shift timer removed. I prefer this, as it reduces the downtime. You still have to watch your fuel, replace tethers and repair equipment, but you’re not returning to the Master Jack every five minutes for oxygen or having to stop playing every quarter of an hour to return to Habitat. If you want a more extreme challenge, you can unlock a permadeath mode or a version with limited revives. There’s even a Cutter Race mode, that puts you on a leaderboard against other players to see who can salvage the most value in the shortest time.

In the background there’s a kind of half-narrative concerning the instigation of a Cutter’s Union. You’ll be sent messages and receive calls from various individuals, some for it and some against it. There’s no action required on your part, so you could argue it’s a little superfluous, but it’s good world-building and makes you feel like you’re a part of something bigger.

Shipbreaker isn’t the best-looking game, but it’s as pretty as it needs to be. The sheer scale when you’re out on a job is impressive, but the Habitat is a low-detail environment and little more than a glorified menu screen. I’m a fan of the retrofuturistic aesthetic, though, which brings to mind movies like Alien and 2001. The soundtrack is wonderful though, as chilled Americana drifts through your helmet, which will scramble if you take a knock to the head.

At times it becomes frantic. You can easily lose control, overshoot a target, or take an explosion to the face that sees you flying off into the stars and it’ll take quick thinking to save yourself. But Shipbreaker isn’t an action game; there are no weapons unless you count demolition charges, and no physical enemies to worry about. It’s a game that feels like a job, but a really cool job where the danger is balanced by the sheer spectacle of a day in the office. It’s like no other game out there, and offers a genuinely immersive and rewarding experience.

Hardspace: Shipbreaker is like no other game out there, and offers a genuinely immersive and rewarding experience.