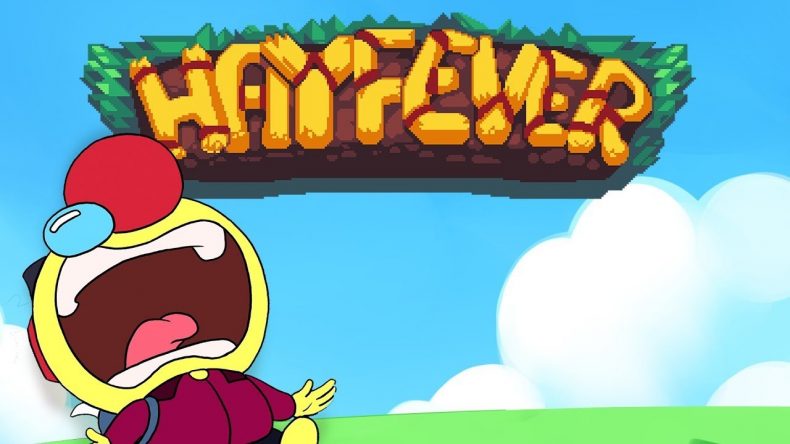 2D platformers always have been, and always will be, my favourite genre in the vast world of video games. For my 3rd birthday I was given a SNES and Super Mario All Stars, and from that day forth my fate was sealed. Hours of my young life were spent dethroning Bowser (and Wart) and I wouldn’t change a minute of it. Fortunately, in the current era of video games, there are plenty of options available for platforming junkies like myself. It’s time to take a break from trying to get beat the C-Sides in Celeste, and go on an adventure with Thomas the postman as he tries to collect the letters he’s dropped with a little help from his hayfever allergies.

Most of us probably wouldn’t call sneezing a superpower, but in Hayfever it is precisely that. After a rogue sneeze means he drops his letters, Thomas has to use his nasal powers to traverse the precise platforming levels and collect the post he must dutifully deliver.With a little help from your trusty van Carlie, you’ll be sniffling and sneezing your way to victory. The story, although brief, is actually rather charming.

Controlling Thomas is actually quite similar to Celeste, with the same combination of jumps and sneezing acting as your dash. You can generally sneeze once per jump naturally, but with the help of pollen and dander you can chain together longer streaks of airborne nasal acrobatics. These maneuvers are key to reaching Carlie at the end of each stage, and are especially necessary to collect the optional letters scattered around each stage. There are plenty of obstacles to contend with throughout your mail-gathering adventure. Be it an enemy bee or a laser beam, Thomas will be defeated by a single hit and sent back to the nearest checkpoint – which sometimes aren’t as regular as I’d have liked them to be. The checkpoint irregularity, coupled with some sections you’ll need to memorise to react in time to succeed, did detract from my enjoyment in a pretty major way.

With one mistake ending any attempt to beat a level, you’ll be retrying and respawning constantly. Although this process is quick, when respawning the game accepts inputs before the screen fades back to the action. This means that if your preparing to rush back into the action and holding a direction, then you’ll probably be dead before the screen is displayed. Hayfever is full of these small issues that just make the experience a chore to play.

Navigating the world is made easier by all sorts of different allergens, which have a variety of effects. Purple pollen makes him defy gravity and float like a balloon, whereas red pollen causes him to do a huge dash. Most of these “power ups” have their own problems however – the purple pollen leaves you with an utterly bafflingly shaped hit box, and the red pollen only allows you to choose your launch direction before you come into contact with it (and before you have chance to see any upcoming obstacles). These issues even permeate into the boss fights, which obviously must be restarted on death. As a boss changes its attack, platforms you were stood on will vanish, and unless you know it’s coming you’ll be in for another unfair and frustrating death.

When Hayfever shines though, it’s a really fun platformer. Each new stage adds new ideas, or combines old ones to create something unique. There are platforms that unlock with keys that lend themselves to stages that require more thought, air currents that you can ride, gravity changing spores. When you’re using your knowledge of obstacles to dash through the adorable worlds, with the catchy background music accompanying you, it’s hard not to smile.

Hayfever is an enjoyable platformer, brought down by some irritating little problems and badly designed obstacles. Beautiful to look at and listen to, if you can get past some of the more frustrating stages, there’s a lot to enjoy in this snotty little adventure.

Hayfever is a fun little platformer with a lot of creative ideas, that falls short of being great thanks to some badly designed obstacles and checkpoint issues. If you can get past the occasional frustrating stage, you'll find some great platforming in this charming world.