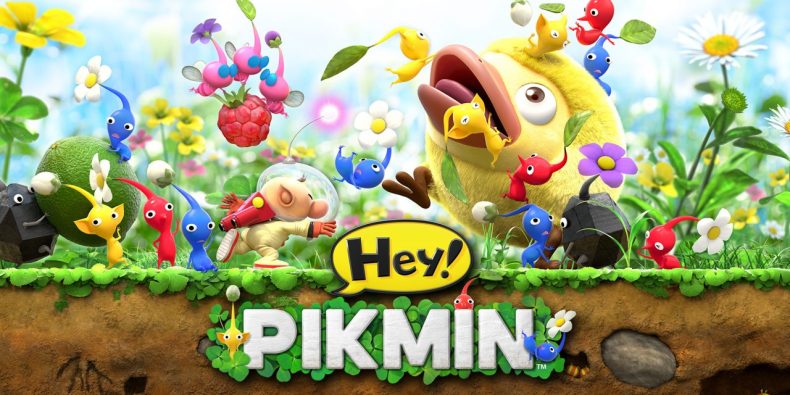 There’s a dark side to the Pikmin universe that we rarely ever touch on, the ever hapless Captain Olimar regularly finds himself stranded on an alien planet and then sets about pillaging habitats for their resources, enslaving some of the population and killing the rest, and looting historical artefacts; while you sympathise with Olimar’s plight and his right to defend himself it’s impossible to not feel sorry for the creatures he leaves in his wake.

Starting this on a downer aren’t I? Well, anyway, Hey! Pikmin sees the intrepid Captain Olimar return and get stranded after his ship comes out of warp right in the middle of an asteroid field, he crash-lands on a facsimile of earth and now needs to acquire the rather arbitrary figure of 30,000 Spakrlium to be able to escape. It seems like a lot, but due to several different elements you’re never short of it and will definitely hit that figure before the end of the game’s story.

Anyway, your goal is to use the Pikmin you find in each level to reach the end. Olimar cannot jump or attack himself, so he needs to use the Pikmin to bring things to areas within his or his jetpack’s reach. The areas are littered with seeds of different colours and sizes, which provide you with your regular platform game collectables, the aforementioned Sparklium, but dotted through each level are trinkets/ baubles/trash, whatever you want to call them that quantify a bulk of this mystical substance that for some reason can power Olimar’s ship. The less questions about the ‘whys’ the better as the way things are done and presented here is completely and utterly charming. There are little events dotted through each level showing the playfulness of the titular Pikmin which breaks things up nicely, and does a good job of communicating gameplay elements to you without the need to give you tutorials every five minutes. Everything is spaced just so as well, so you’ll always know what can be reached with a well-placed throw or a gap that can be crossed with one jetpack trip. You’ll always have whatever Pikmin you need on hand to accomplish your goals too, because their hiding places crop up regularly and will always contain Pikmin if the game believes you fall short of the quantity needed for anything.

All Pikmin obtained travel back to your quest hub the Pikmin Park after each expedition, and here they complete their descent into servitude with you putting them to work in one of five districts farming for more Sparklium and trinkets. It’s kind of sad as those little events I mentioned earlier show the Pikmin to be happy creatures whisked away from their homes and forced to work. They seem happy working for Olimar, but are they? Do they have a choice?

You never take Pikmin out of the park to go on expeditions, you always pick up new ones on every jaunt. As a result, enemies pose little threat as there’s always an avenue of attack and you’re safe in the knowledge that you’re never throwing away your greatest resource, your workers, and while the puzzles can take a little bit of finding they won’t give you too much cause for thought in their solution. The tightness of the level design and the detail in the environments can cause you to lose sight of areas to explore meaning you’ll miss out on trinkets on your first pass through of some areas; this won’t happen often though and just the occasional wander off the beaten path will often net you every collectable on offer. Another problem is that the game is controlled solely via the circle pad and stylus; your jetpack, whistle and Pikmin selection are all done via buttons on the touch screen, and because of the small quantity of real estate they’ve been made kind of small, in the heat of the moment it’s entirely possible to miss these and end up throwing a Pikmin instead, which caused me to lose a few of my little buddies accidentally, their little faces as they died, *sniff* it still chokes me up now.

Anyway,those are trivial issues in a wonderfully charming game. Every new Pikmin, enemy or trinket found is added to the ship’s database along with a description annotated by Olimar himself, all of which are hilariously inaccurate but such good fun to read. He talks about his discoveries, his work and his family, it all comes across as really heartfelt and tugs at the heartstrings as you read the musings of a guy far away from his home; my personal favourite is to do with a Santa snowglobe, but I won’t go into spoiler territory here.

Hey! Pikmin is a slight divergence from the regular Pikmin mold, and despite the story of Captain Olimar destroying an eco-system and enslaving the planet’s population the game is a delight to play. A straight playthrough won’t take you much time at all, but filling out the database completely will give you a little bit more to do with your time should you so desire. This is yet another brilliant title to add to the 3DS’ library as the system nears the end of its life, it’s just absolutely delightful.

Easy to get into
Wonderfully charming
Beautifully designed

Hey! Pikmin isn’t a long game but throughout it’ll capture your heart just as regularly as Olimar captures Pikmin.