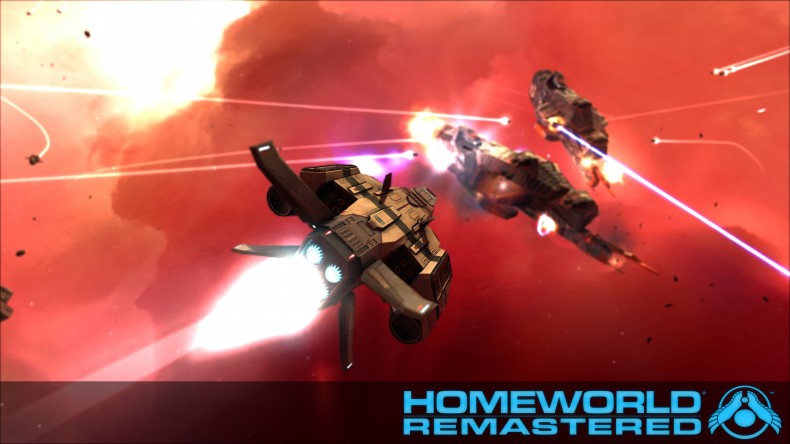 When remastering a game, it no doubt helps when said game is already excellent. Such is the case with Homeworld 1 and 2, brought back to your screens after over a decade and, while Gearbox has undoubtedly done a great job on the visuals and audio of these classic RTSs, it’s the original gameplay itself that makes these two worth playing after so long.

Without giving away too much, the stories both follow a similar pattern: in one, a civilisation is forced to journey across the stars to find the home of their ancestors; in the other, after many years the same people go to war. Brilliantly written, both start you off on the back foot, chased when you thought you were safe, and see you gradually retake the initiative.

Meanwhile, the core gameplay hasn’t aged at all. As with most RTSs, gameplay is a balance between collecting resources, building units and defeating your opponent. Your Mothership is the focal point of the fleet, and its destruction means instant failure. Capable of producing most units, doing so involves constructing the correct module – fighter, frigate etc. – and researching the required hull if necessary. Each play a distinct role, and while a balanced fleet is essential, it can be achieved with different combinations. Units are controlled with a right click, either on a target or in the middle of space, with the latter bringing out a disc on the horizontal plane, the radius of which indicates the distance between the ship and its new location, while holding the left button and dragging changes the height. It makes controlling units in a three-dimensional space a doddle, which is no small feat.

To aid you further, hitting the spacebar zooms you all the way out of the battle so you can view the entire map, with units represented by various icons depending on their class. It’s a quick and simple way of assessing how a battle is going, and for moving units long distances. The UI is also relatively clean, with clear construction and research menus using unit icons to differentiate them.

Left to their own devices, your ships are reasonably clever, too. Each will pick out a sensible target for their class, unless ordered to do so, so there is no need to micromanage – an aspect from Homeworld 2 that has been brought into the first game. This could leave you feeling like there is little to do but watch, but in practise it’s a small blessing, as trying to pick out individual fighters to direct them to their next target can be tricky. Instead, it allows you to focus on your larger ships and direct their fire where it will be most productive, perhaps the engines of the carrier trying to escape the battle, or the flak frigates causing havoc to your smaller craft. Not that leaving you to watch is a bad thing. The Homeworld games always looked great for their time, but thanks to Gearbox they now look downright gorgeous. Ships are packed full of detail, with textured surfaces covered in blinking lights and crenulations, their weapon fire ranging from little sparks to brilliant white beams of light. Amongst all that you have the knotted engine trails of the smaller fighters, the explosions tearing chunks out of dying ships and the drifting wreckage of those already lost, all set against the beautiful backdrop of space.

The tone of the audio fits magnificently alongside all of this. The sweeping chords of resource-collecting strike against the discordant notes of battle, tying in wonderfully with the sounds of engines and shots hitting their mark. Add in the notes of panic in the voices of your pilots as they announce they are going down, and the calm, collected – almost disconcertingly so – tone of your Mothership and the atmosphere is creates is perfect.

Issues from the originals remain however. Sometimes the campaign missions suffer with pacing, either with too long a build up or, worse, a sudden ramping up of difficulty, with opponents overwhelming you before you have any chance to react. Often this leads to restarting a mission from scratch. Early flaws in your plan can scupper you, meaning rebooting a save can be useless,and you’ll soon learn to overcompensate on resource collectors at the start as losing your income stream is as good as dying when more and more enemy units start to spawn. There are some issues in the multiplayer as well, which can be played offline against the computer. Matching players up against each other, it’s your standard conquer all affair, but Gearbox has combined the two titles’ multiplayer modes together, meaning you can match up armies never designed to fight. So far it appears there are some imbalances, but the developer has attached a Beta tag to the multiplayer, with the plan being to address any issues from player feedback.

These issues aren’t a problem though. At its core, Homeworld Remastered is as good as the Homeworld games ever were – and the originals do come included in the price – and to complain of some pacing issues would be churlish. Gearbox has taken two of the finest RTSs ever made and turned them into something you’d be proud to show off on any modern gaming PC. Fans of the originals will fall in love with this, and if you missed them the first time around you’re getting two of the very best RTSs ever made with this.

Check out our Interview with Chris Faylor and Brian Martel

Check out our Homeworld Remastered Preview