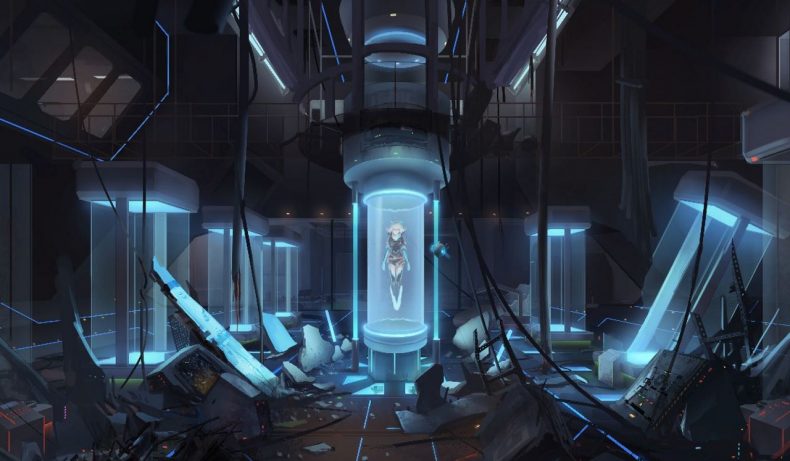 Whenever a game is picking up steam (so to speak) on PC, loads of people on my friends list either buy it or add it to their wishlists. ICEY released on PC a while back and it basically became a game loads of people recommended but I didn’t really pay much attention to it. People threw around terms like “Metal Gear Rising in 2D” and the likes and after finally playing through ICEY, I see how great this little game is.

ICEY from FantaBlade Network is a 2D side scrolling hack and slash adventure game with a meta narrative. The obvious comparison is The Stanley Parable for that aspect and ICEY has managed taking some elements from games I love and intertwining them brilliantly. You play as a female robot called ICEY who wakes up in a pod with the aim of killing Judas. As you play, a narrator is guiding and commenting on what you’re doing. This leads to some hilarious moments and of course I tried my best to disobey said Narrator to end up earning some trophies in the process or even gold. ICEY runs through different zones in each area that are full of various enemies. The enemy types are introduced one by one before you get a section of multiple enemies together. You can get away by just button mashing early on, but not utilising combos will result in only suffering. There’s even a Revengeance like prompt that has you pressing O at the right time to execute or do a powerful attack when the time is right on an enemy. You can then collect energy and perform a powerful area-of-attack so to speak attack that damages everything within the frame of view.

Boss fights are hit or miss with some being a lot of fun, but others can be a slog where you brute force your way into success. I’m not a fan of pairing annoying enemies like the flying moth type creatures with hard bosses. Every few areas you get access to an upgrade station that lets you buy more combos or abilities. This feels a bit under-utilised given how scarce gold is until later. The addition of a narrator to what would otherwise be a decent game on its own, makes the experience so much better. I spent time just trying to frustrate the narrator and there’s a moment where ICEY finally speaks which has a very interesting reaction from said narrator.

Fast paced action games live or die by their performance and animations. ICEY runs brilliantly for the most part, but I ran into a few slowdowns or random stutters while switching areas. Animations and visuals are top notch, though. The visual theme used throughout is terrific and a lot of the combos and attacks here are GIF-worthy. The lovely narration and music only help to cement this as a must play for fans of responsive combat.

If you’ve ever wanted more games like Metal Gear Rising: Revengeance and enjoy trying out unique games, ICEY is an essential. The PS4 port already includes the DLC that was added to the PC game, but I hope the team adds some more stuff here because I just need an excuse to get back into this.

ICEY is a nice little adventure that blends in some great combat with a fourth wall breaking adventure and excellent visuals.