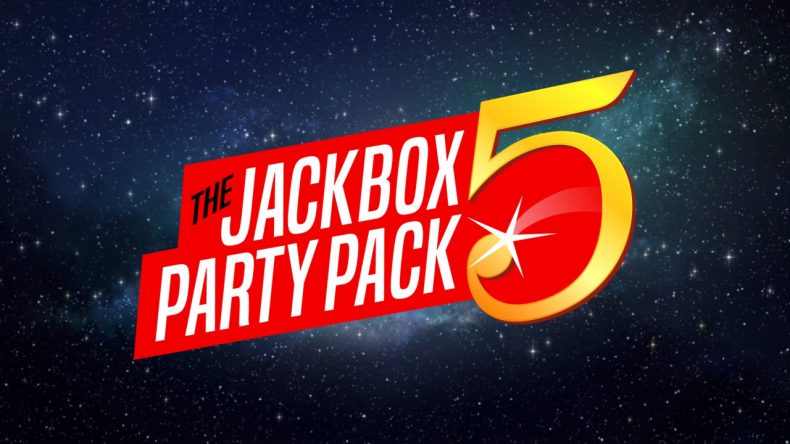 It was three years ago that my family got hooked on the original Jackbox Party Pack. After a few games at home I dragged my PS4 around to my mother’s house and got a load of extended family into it, and before I knew it my mum had bought a copy, my brother, my aunty and my cousins – the sense of fun is infectious and the sheer insanity of it all helps proceedings along.

We’re onto a fifth instalment of the Party Pack series, which really does seem like overkill. I’d have much preferred it if Jackbox Games just released new questions for existing games or new games via DLC. I guess the relative cheapness of the compilations helps keep the constant releases more palatable, but the packages are getting incredibly inconsistent with their overall quality. This fifth party pack then comes with another five games, four new ones and the return of You Don’t Know Jack. It’s a bold move to make the generally rude General Knowledge game the headliner here, considering the series thrives on the input of the participants and there’s something off about its format. I’m not sure what it is, but while the scattergun approach of You Don’t Know Jack 2015 from the first party pack kept the pace flowing quickly, this feels a little slower-paced, and the cue card layout across the bottom plays host to a series of pictures with very little humour, context or purpose.

That said, the questions are an incredibly unpredictable set of downright bizarre and improbable answers guaranteed to make you shout out your disbelief on a very regular basis. I mean, a question about which book to read to ensure a happy ending in a massage parlour initially drew as many confused looks as it did laughs when the answer was revealed. I just don’t feel that, as the main event, this has as much going for it as something like Fibbage does, and it really doesn’t help that there’s no family friendly filter for it, so you can’t really get the kids involved.

Player interaction is absolutely key in getting people invested in a party game and here there are two stand outs. Split the room gives you a hypothetical scenario to fill in the blanks with the sole goal being to either appeal to or put off the people you’re playing with, if you manage to get a good split of people between the two possibilities you created then you get bonus points. The better game though is Patently Stupid. A party pack isn’t complete without a drawing game, and Patently Stupid not only asks you to draw, but create a problem, then come up with an invention to solve it. My son’s problem being me passing wind prompted me to come up with the ‘Butt Cork’ which you then have to present to the other participants with a catchy slogan. Obviously when it comes to these things your mileage may vary due to the level of imagination on offer, but provided you have someone who can come up with ludicrous problems to solve you should be able to get the odd slice of fried gold.

There are two other games on the roster here, Zeeple Dome is slightly different to previous offerings, giving players an arena blaster/platform hybrid controlled using your device. You pull your finger across your screen to determine direction and power then let go to fling your character at the enemies that appear. Sometimes they’ll change colour and can only be attacked by the player of that hue. It’s pretty fun, but nothing more than a distraction and most likely will only be played while you’re waiting for everyone to sit down to play something else.

Finally there’s Mad Verse City, a battle rap game set in a city being attacked by giant robots. Here you’re asked to finish a line, then create a second line to rhyme to in the style of a diss track. What’s clever here is that the lines are spoken by the characters in the game, granted it’s not spoken in a way that generates any sort of feeling, but it’s a cool touch. What this game doesn’t do though is specify whether you need to preface the first work you enter with an ‘a’ or an ‘an’, so at times my first lines made no sense because one of those was either missing, or had doubled up due to the fact I put one in. You Don’t Know Jack is definitely the big hitter here, but is at least backed up with two other quality games for this pack. Patently Stupid is the new Drawful, while Split the Room qualifies as a good replacement for Quiplash. You’re unlikely to play the remaining games much outside of a quick go for novelty, but that’s all right, not everything can be all killer no filler. If you’re the type of person who loves to get a few friends round for drinks and nibbles then once again Jackbox will provide you with a good time until everyone has to go, and as long as everyone has a good time then that’s all that matters.

It’s nearly Christmas, and if you’re stuck for a Party game this year the team at Jackbox has you covered once again.