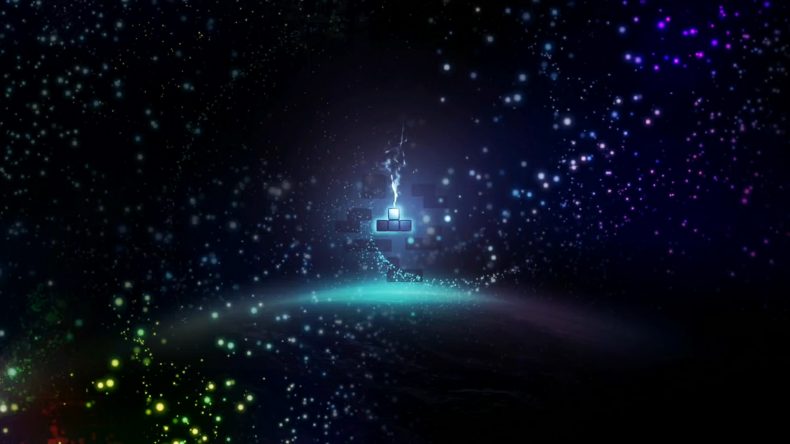 Tetris has been a part of my life for as long as I can remember. When I owned my first Game Boy back in the late 80s it was the first game I played on it, and ever since I think back to those simpler times and remember that being a kid was great. Sure, you had to go to school, but when you weren’t doing multiplication and science experiments with bunsen burners and iron filings, video games were where the fun was at. You’d come home, drop your school bag at the door and jump into a world that existed outside of reality.

Getting old can be tough. You learn all about getting your heart broken, losing loved ones, and dealing with the encumbered burden of money problems. It’s funny really, because that stress-free existence of childhood spent playing Tetris for hours on end has found a way to reciprocate the abandonment of worry with the release of Tetris Effect. As I sat down for the first time with it, the stress of everyday life lifted, if only for a while. I lost myself in each of the many levels, as the visuals took me away and the music soothed my soul. It’s a very cathartic experience, and playing Tetris Effect helps you to forget all of life’s troubles by carrying you off into a place that wants to help make you happy. Tetris Effect features much of the same game that it’s always been. You move the tetrominoes across a grid as they fall, and do your best to build lines of blocks, making them disappear. The more lines you clear at once earns you more points (four lines being a ‘Tetris’), but as time ticks on the blocks start to move faster, and that’s when it becomes trickier to build your lines. Whilst you do have to do all these things, there’re new mechanics that help you when the going gets tough (and believe me it will). With each line you build, a gauge builds up in the bottom left of the screen, and when it reaches its maximum you’ll be able to use an ability that allows you to freeze time. when triggered, and you’re in the ‘Zone’, it’ll allow you to move tetrominoes around and score points without any repercussions. Whilst it doesn’t last forever, it’s a neat feature that grants you some time to break down the blocks and allow you to continue for longer.

What makes it so inviting to play is the visuals and the music. Whilst I’ve never played Lumines, the brightness and colour of Tetris Effect shares similarities, except its amalgamation with the music makes for a beautiful experience. Some levels are underwater, and the soothing music makes it such a joy to play. There are levels set in dungeons, the Renaissance, space, forests, and a plethora of experimental neon environments that’ll take your breath away. Pair these worlds with the diverse music and it creates something spectacular. Whats more, as you play through each level you’ll notice the visuals begin to evolve and react to whats happening in the Tetris grid. Blocks spin and glow, and objects in the scenery pulse and move depending on what you’re doing in the game. There’re many ambient tracks that evoke emotional responses, which was completely unexpected. Some levels also have energetic tracks not dissimilar to games like Thumper, and playing through these are hypnotic, akin to the feeling Alex must’ve had in that scene in A Clockwork Orange. The music also reacts to gameplay, and when you’re rotating blocks certain notes hit and it begins to feel like a rhythm game almost. Playing in PSVR takes everything to another level. You become a part of each world, and when you can look around the whole environment and hear that incredible score through its dynamic sound makes Tetris Effect even better. Few games manage to pair its music, visuals, and gameplay in such a unique way, and getting to experience it in virtual reality really does make this game better.

The Journey Mode sees you take on each world one after another, and with 30 different stages you’ll never get bored of playing. Every one has a different theme and track, so there’s plenty of versatility on offer. The Effects Mode offers plenty of different challenges all capable of pushing you to the limit. Marathon requires you to get the best score you can in 150 lines, and Master gives you a constant stream of tetrominoes moving and ridiculous speeds. Mystery has to be my favourite, as you’ll face various objects pop up like bombs you’ll need to disarm, or purple shapes that obscure your view. They aren’t all challenging, though; you can play through various playlists that bring together sea levels, or wind levels for you to play and relax whilst doing so. The Chill Marathon is also lovely, because you get to simply enjoy the game with no threat of getting a game over by removing it.

Tetris Effect is a wonderful take on a game that has been around for as long as I have. For a series that’s 34-years old, it’s amazing to see how it can still find a way to reinvent itself whilst still remaining true to its roots. The majestic visuals and emotive soundtrack allows you to get swept away in its beauty, freeing yourself of worry and allowing you to enjoy such a pure and addictive game.

A lot happening on screen at times

I never thought I'd ever feel this way about a Tetris game, but here we are. It has the same addictive and fun gameplay, as well as some amazing visuals and a soundtrack that offers so much emotion.