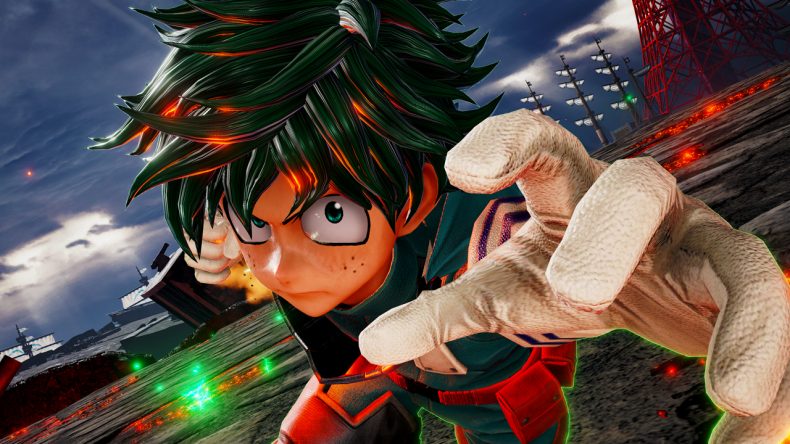 Regardless of what your favourite anime series is, I think it’s fair to say that you’re likely to find a game based on it with Bandai Namco’s logo in the bottom corner. This time around they’ve decided that instead of doing a game for each series they’re going to bring each series into one game, but does a game with so many characters have a character of its own?

The game begins with Frieza attacking Tokyo and after a bit of trickery in making Goku dodge, your avatar is introduced after being hit by Frieza’s attack. Thankfully Vegeta’s son, (future) Trunks is on hand to insert a cube into you (oo-er) that bestows Shonen style super powers, and from there you’re thrown into a character creator complete with a robust set of anime eyes, hairstyles and, yes, a bust slider. So, now that you’re a badass beatdown machine you’re drafted into a team of Jump manga characters known as Jump Force to take on a mysterious menace known as the Venoms.

It’s a storyline setup that would give the Kingdom Hearts games a run for their money, that’s for sure. The Force is run by a man called Director Glover (who despite being designed by Dragon Ball supreme Toriyama is incredibly dull compared to the cast of misfits surrounding him), and for some reason he’s decided to divide the Force up into parts Alpha, Beta and Gamma, which (because the game’s mission structure switches your compatriots up constantly) makes the whole team selection rather moot. Yes, there’s a team ranking leaderboard (although you’re never really going to look at it), and being on a team means you’ll be able to learn moves from that team’s leader; thing is, in-game currency is plentiful and you can buy the special moves from the shop anyway. Moves can be enhanced from the shop granting a variety of status effects, like increased strength for yourself, or a physical resistance reduction for your opponent upon a hit.

Anyway, Jump Force basically revolves around you picking a team of characters and beating seven shades out of your opponent. Unlike other games of this nature, the three characters share a single health bar, which considering the nature of the game’s combo system can feel a bit unfair as once you’re caught in what the game calls a ‘Rush’ you’re stuck and can say goodbye to a significant chunk of health.

Battles are at least good spectacles of anime excess, taking many cues from Dragon Ball with fighters teleporting from place to place dealing attack after attack. Characters can be slammed into the ground with debris exploding around the impact site only to disappear five seconds later. There’s a ridiculous amount of particle effects going off especially with the ridiculously over-the-top Awakening moves which can result in characters changing form, such as Goku going Super Saiyan or Naruto entering his tailed beast form. There are plenty of stunning locations to fight in too, like Konoha village or Japan in the shadow of a traditional Japanese castle. But after running around them for a while you quickly realise that they’re nothing more than flat arenas with invisible walls and a few bits of detritus here and there. Granted they’re just there to help frame the action, but multi-layered levels and things to smash opponents through would have really improved the spectacle.

Not that putting things like that into the battles would help the game’s engine though. The frame rate struggles during transitioning to different areas of the main hub, let alone during busier parts of combat. There’s horrendous judder when climbing stairs or just as an Awakening move is dying down, it’s almost headache inducing to witness. There also appear to be many instances where animations have missing frames.

These missing frames are especially noticeable in the game’s cutscenes, which are incredibly frequent and bookended by lengthy load times, which have been improved since I started playing but are still too long, considering how numerous they are. Not all cutscenes are created equal either, some are voiced, most are not. The ones that are are accompanied by mouth animation that looks like the characters are trying to get some toffee that’s stuck to the roof of their mouths, while the non voiced ones have animation that looks poor compared to 60s TV series Thunderbirds. In the run up to the game’s release a lot was made of the realistic-anime aesthetic the game has adopted, and to be honest I don’t think it’s to the game’s benefit at all. What doesn’t help is the lack of attention to detail, with the aforementioned debris that disappears, missing animation frames, or during character selection when the game immediately heads into the match after you select your third character without asking if you’re sure. Then there’s silliness along the lines of the group’s continual reliance on your created character or my favourite bit where in one cutscene Vegeta insists that something is explained to him ‘in plain English!’ when the game is voiced entirely in Japanese.

Finally, in a game made to be played online, with a hub world filled with other players, the way it chooses to select the person you’re interacting with needs to be better. The mission counter is frequently surrounded by people and instead of highlighting the vendor you’ll regularly target another player instead, what then ensues is you nudging your character around trying desperately to get the cursor onto the vendor so you can actually undertake a mission.

I don’t want to call Jump Force a failure, as it’s actually better than I thought it was going to be. Yes it’s dumb, it also feels like it’s held together with gaffer tape and super-glue, but it at least does what it has set out to do and puts you in the middle of ludicrously over-the-top pyrotechnic battles. You’ll pick your favourite moves and then enjoy watching your tv explode into colour. It’s just so hard to overlook the glaring faults that permeate the game, and when you spend more time staring at loading screens than you do fighting you’ll find yourself wishing for a Dragon Ball monologue instead.

Jump Force wanted to be something for every anime fan, but while there’s plenty of fan service there just isn’t enough substance to proceedings.