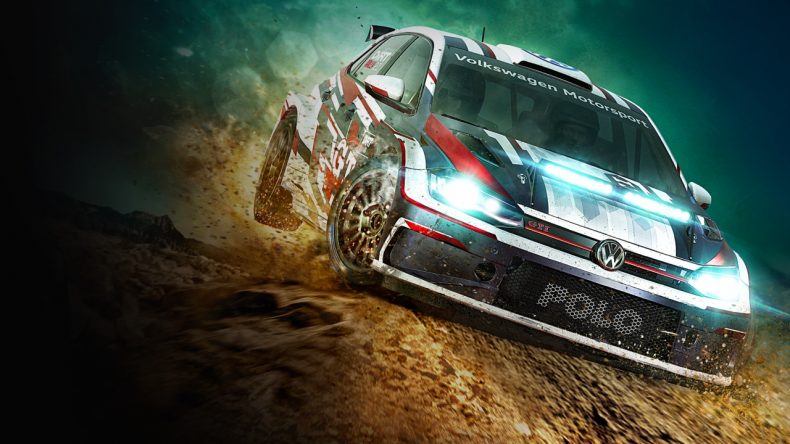 When your very first rally is a night stage, you can’t help but think that DiRT Rally 2.0 wants you to know that it isn’t playing around. Thankfully, despite a complete lack of tutorial or proper introduction, Codemasters knows how to ease players into its games even when they’re as brutal as this one.

My career started in Argentina, but rather than strapping me into the driving seat of a fire-spitting Mitsubishi Evo and pointing me at the nearest tree, DiRT Rally 2.0 put me at the wheel of a more sedate Lancia Fulvia. The Historic class isn’t going to go easy on you or anything, but the Fulvia is slower and heavier, giving you a slightly better chance of keeping the car on the right path instead of wrapped around the same tree as the Mitsubishi. Unlike DiRT 4, which made the cars more manageable and the tracks wider, DiRT Rally 2.0 offers no such friendliness. This is a rally simulation, which comes with the same challenges those real drivers face, just without the potential consequences of injury and death. The roads are almost claustrophobically narrow at times, requiring pinpoint accuracy in the control of your car, which isn’t easy at the best of times, never mind when you’re pushing 100mph and suddenly find yourself hitting a technical section with slow, tight corners and a cliff edge on one side. Your butt-hole will be able to crush diamonds. And if you turn into a corner at the wrong angle, you may well learn how clothes feel in a tumble dryer as your car rolls into the bushes. Or, if you have the luck I had, you’ll be unsighted by foliage coming into a corner and find yourself in a losing battle with a metal gate. This will end your race.

To make matters worse in these situations, the signature rewind function pioneered by Codemasters hasn’t been a part of the more recent DiRT outings and it certainly isn’t present here. Instead you’ll have a limited number of restarts available to you over the entire rally, so you really have to be careful. Unfortunately, this can be a problem, through no fault of your own, during the otherwise excellent Rallycross races. The AI is incredibly aggressive, to the point that it will happily shunt you into barriers that can and will ruin your race. Codemasters’ racers normally have realistic and fair AI, so this makes it extra hard to accept, especially when the first corner in Sweden is ripe for having your bonnet crumpled and your engine smashed. If you’re on the inside of that bend, you won’t have yourself a fun time. The thing is, when DiRT Rally 2.0 is at its best, you’ll forget about these issues. You’ll be too engrossed in the action, trying to keep your car away from that tree that wants you to come say “Hi”. There’s a feeling of pure exhilaration as you barrel down a high speed dirt road, back end sliding around flat rights and lefts, kicking up clouds of dust in your wake. In all fairness, when you’re in a rally and aren’t having to fend off the AI, the only problems with the gameplay are down to your own skill level. In many ways, it makes it all the more frustrating that the Rallycross AI has the ability to spoil the experience.

Perhaps even more frustratingly, Rallycross is actually fantastic at times. Maybe even the best part of the game, or rather it would be without the AI issues. Luckily, that’s where online multiplayer can help. You’re always connected to Codemasters’ RaceNet servers, so anything you do in a rally is added to online leaderboards, but if you want to test yourself against real players, face-to-face (well, sort of), then Rallycross provides the perfect arena. Honestly, it made me realise just how far I have to go in terms of my abilities, but I had so much fun that it didn’t matter that I was placing no higher than third place. The servers were never an issue either, keeping the action smooth during every race.

I wish the same could be said for RaceNet in general, which unfortunately runs all through DiRT Rally 2.0. I could go into the “evils” of online servers in single player games, but this is not the time. However, it can cause problems while playing through this game’s career mode, as I discovered. After a stage, RaceNet could not connect and the game would only give me the option to quit, restart or make another connection attempt. I literally could not continue without RaceNet’s say-so, even in single player. Thankfully, it connected a few minutes later and everything was fine, but that wasn’t the only time it was an issue. There were a few times where RaceNet was struggling and this would essentially lengthen loading and saving times considerably, as DiRT Rally 2.0’s continually attempted to connect. Not game-breaking, but not welcome either. What is welcome however, is DiRT Rally 2.0’s stunning presentation. Okay, so its menus are a bit stale and there’s none of DiRT 4’s brashness and charisma, but once you get into the car and out into the countryside, that’s where Codemasters’ updated EGO engine really shows you what it can do. Whether it be the intricately detailed and incredibly realistic car models, or the new degradation feature that visibly (and physically) changes the nature of the surfaces on which those cars drive, everything is very impressive. But perhaps the thing that impressed me the most was the lighting, especially when playing with HDR switched on, on the PS4 Pro. I’ve seen great uses of HDR in games, but DiRT Rally 2.0 uses it in such a way that just helps the game look more realistic than any other racer I’ve played. The lighting just…pops. Even when it rains. Especially when it rains. All that, and it maintains that healthy 60fps for an ultra smooth experience.

Aside from a few issues with the Rallycross AI and the unnecessary need for online integration in the single player side of things, DiRT Rally 2.0 is a fantastic rally sim. It offers the most realistic interpretation of the sport, which brings with it the rather brutal-but-fair difficulty level. It brings DiRT 4’s career mode with it, including the team-building side of things, though sadly leaves out the best parts of its charismatic presentation in terms of menus and setting the scene. For me, it doesn’t quite live up to DiRT 4’s more fun style, but if it’s realism you’re after, then DiRT Rally 2.0 is right up there with the best.

Some incredibly aggressive Rallycross AI
RaceNet integration can be intrusive

If it’s realism you’re after, DiRT Rally 2.0 is up there with the best rally sims out there. It’s just let down a bit by some poor Rallycross AI and intrusive use of its online features, even in single player modes.