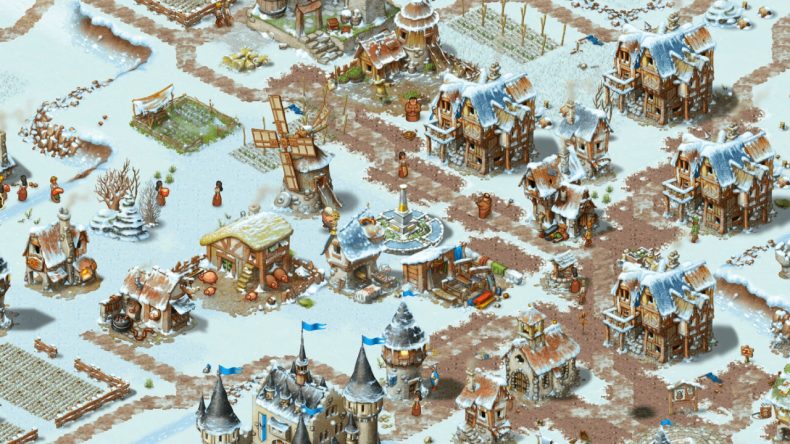 Resource management titles have been a part of my PC gaming history since the beginning. I’ve fallen in love with the likes of Settlers, Age of Empires and Tropico over the years, all of them scratching an itch to micromanage a society, and have everything running like clockwork. I’m sure in fact I was probably a tyrannical despot in a previous life, delivering autocratic rule over an obliging kingdom. Either that or I just like things neat and tidy and to overcome a challenge. Either way, when Townsmen: A Kingdom Rebuilt came along – a remastered version of the 2016 release, just called Townsmen – my interest was instantly piqued, and I knew I’d be falling down the familiar rabbit hole of resource management once again.

If you’ve played this genre before, then you’ll instantly know the score here. We’re talking the construction of buildings, the production of food and meeting the needs and demands of your ever-growing population that you have taken under your wing. The choices you make will affect their happiness, and thus their performance, and ultimately if you turn into a flourishing kingdom or a desperate leading struggling to control a populace that resents them. The formula then, hasn’t really changed, which will appeal to long-standing veterans of the genre like me but should also be a word of caution to manage the expectations for everyone going in. Let’s be clear right now, Townsmen: A Kingdom Rebuilt does very little to elevate the genre beyond what’s already been established by decades of titles that have gone before. Ironically, despite the game being about expanding your borders into new frontiers, it does very little to push the boundaries of what a resource management title can be about. That very fact might put some people off, but actually if you can make peace with that, you might very well find yourself enjoying what’s on offer here despite it being very, very familiar.

For a start there’s a whole lot of content here for you to enjoy. To kick things off, there is six chapters’ worth of tutorial which do a pretty effective job at establishing most of the mechanics. And what I really appreciated is that by the last couple, there’s actually a chunk of challenge to finishing them. Unlike most tutorials that simplify the mechanics for ease of understanding, so you race through them, Townsmen: A Kingdom Rebuilt takes its time and forces you to play about and achieve objectives that will take time to fulfil. And what that means is once you’re into the “main” game, you feel ready, up-skilled and prepared. Then, when you then look across and realise there are now 26 pre-made scenarios to play through, each one taking you a few hours to overcome, depending on their difficulty, you’ll begin to appreciate the content available here. And that’s before you embark on the Endless Mode, which is the sandbox mode that has over 20 maps to choose from, each with their own hallmarks and considerations as you create an empire from scratch.

However, there are a few minor issues which tend to frustrate you as you’re playing. Firstly, because of the preset angle of the camera, it is quite easy to have buildings become hidden behind one another, which is even more frustrating if you need to select the building behind for repairs or other reasons. Yes, you can consider this when placing your buildings in the first place, but it still accidentally happened to me on more than one occasion resulting in some impromptu demolition of the front building, which clearly annoyed the residents who were living there at the time. You also seem to have less control over how to manage your stock in this game versus other titles. There’s no preferences, or ratio sliders to tweak to set which resources can go where. The only option available to you is to remove people from buildings to stop them working there, and thus using up resources. Given games of twenty years ago had more fluid, malleable options as standard, this feels like a misstep, especially for a genre that is all about managing resources. Also more so than most games, it feels like if you find yourself in a rut, like running out of money or food, it is harder to turn your fortunes around. On a few occasions I would find myself out of money and the only way out of that situation is to spend money to get yourself in a better situation. Alternatively sometimes food would be my nemesis, and the only way out of that hole would be to build more food production buildings, which all needed staffing, which meant building more homes, and by extension creating more mouths to feed. Sure both of these problems eventually resolve themselves, either through patience or planning or both, but it can feel harder than it needs to especially if at the same time, buildings are catching fire, plagues are running riot or some bandits are attacking your stores and stealing your precious resources.

And as missed opportunities go, the combat, or lack thereof, is perhaps my biggest gripe. The way it works is said bandits look to raid your settlement and your only options is to have barracks and guard towers strategically placed to ensure their field of influence covers your entire kingdom. Then during raids, your own soldiers go out to do battle with the bandits, and either win and send them back on their sorry way, or they are defeated and the bandits leave with your stuff. The only influence you can have on proceedings is by keeping the soldiers stocked up with weapons and armour, and food and drink to improve their performance. There’s no training or upgrading going on here, and there’s also no attacking of other players. It makes what is normally one of the most interesting parts of these titles incredibly flat and passive.

But despite all of that moaning, I actually really enjoyed playing Townsmen: A Kingdom Rebuilt. Numerous evenings were spent building, managing and ruling the denizens of my medieval utopias, often being so engrossed with what’s going on that I wouldn’t realise five hours had passed and it was way beyond my normal bedtime. But I regretted none of it, because despite its flaws, its niggles, its missed opportunities, there’s still a competent, enjoyable, challenging and ultimately familiar resource management sim in here. It’s incredibly addictive in the best way, and the learning curve it employs sucks you in and doesn’t let go. Despite the frustrations, you’ll want to overcome the challenges, beat the scenarios, complete all the quests because you know with some persistence and practice you’ll ultimately prevail. There’s also a levelling system with permanent unlockable upgrades that transfer across different games you start that give a real sense of progression and reward for your endeavours and helps connect what could otherwise be very disjointed missions. The way it displays all of your pressing issues as icons down the left of the screen like something out of Two Point Hospital, makes managing the problems of your people easier, allowing you to prioritise your decisions. The cute, almost retro art style takes me back to the good old days, being twee and functional, while clearly nothing spectacular, and its music perfectly complements the medieval setting, even if I swear one of the tunes sounds just like the opening to Game of Thrones.

So, all in all, Townsmen: A Kingdom Rebuilt kind of sounds like a contradiction in terms. Its name implies an enhancement, an evolution, at least progression on what has gone before, and aside from sheer content, there’s nothing here to validate that claim. It’s an old-fashion resource management game with a relatively fresh lick of paint that functions perfectly well. It won’t be the title that brings in newcomers to the genre, but because of its accessibility and familiar gameplay, it could very well suck in those who enjoy such titles for hours on end, and those people will enjoy their time immensely, as is their vice. It won’t ever be recognised in the same breath as the like of the Settlers or Civilisation series, but it can be a nice stop-gap for most until the next of those big hitters arrive.

An ideal recommendation for veterans of the genre, Townsmen: A Kingdom Rebuilt scratches a really familiar itch. But there's nothing new here to entice newcomers away from other titles.