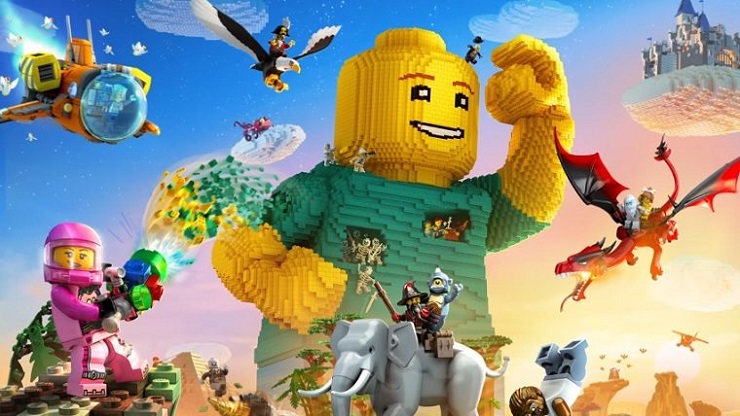 How frustrating it must be for LEGO, the premier brick building toy on the market to see the meteoric success of Minecraft, a game that is often referred to as “virtual LEGO”. Minecraft has, of course, gone on to enjoy stratospheric success and has spawned a number of clones trying to capitalise on the unique sense of exploration and creativity that Minecraft offers players. LEGO Worlds is far from a Minecraft clone though; it delivers an experience after an almost two year early access build that does enough to make it stand on its own.

Having played the early access build on PC when it was first released, it is clear that much has changed. For one, there is a semblance of a story that serves to act as a framework to guide the player in how to get the most of the worlds and the various building tools available to them. More significantly you are not given access to all the tools of the sandbox from the start, instead you must earn this status by obtaining ‘Master Builder’ level, an arbitrary status achieved through locating one hundred golden bricks and from thereon in you can begin to create your own worlds.

There is plenty to do before you reach that point though. The game begins with you spinning in space, a meteor has damaged your spacecraft and you crash land on a planet. To fix your craft and be able to take off and explore other worlds you will need to locate three golden bricks. As well as this first quest, you are also asked to locate your first tool – the “Discovery Tool”. By pointing your tool at items in the world you will then have the ability to “discover” them which inserts them into your inventory for use later on. Each item you discover will cost an amount of studs, the familiar currency from all previous LEGO games. Studs can be found by completing quests that the various animals and characters have, finding them in stud chests and by smashing the items around you.

Worlds start small with limited items to discover, but as you gather more bricks you will begin to unlock larger worlds with more complex biomes teeming with items to discover. Again, not everything is available with some characters and animals only becoming so after you have carried out some quests for them or located an item that will allow you to discover them with your tool; some of these items may well be located on another world so there is a lot to keep track of. At first it feels frustrating to realise that you can’t just scan everything immediately into your inventory, but after a while it adds to the sense of exploration that LEGO Worlds excels in.

Each new world you randomly generate offers something new to look at. There are underground caverns that hide chests and items that you can’t find over ground, and deep oceans to dive into as well as pasture land, forests and tundra. To get around there are lots of vehicles and unique creatures to play around with which adds to the fun. Even on worlds that have familiar biomes on them there will invariably be something new that catches your eye; a bald eagle perched on top of a mountain in a mesa biome that you haven’t seen before, or you might find the plans for a Unicorn stable and wonder if you will eventually find a unicorn to put in it if you fly to another world. At upwards of twenty hours I am still discovering new things that consistently delight me and I have yet to locate all the different biomes available.

The build tools available to you are pretty varied with tools that enable you to build structures brick by brick (providing you have located the bricks by capturing ‘Troublemakers’ who randomly run around the maps), a tool that allows you to change the terrain by either raising it or lowering it in a variety of shapes, a copy tool for quick structure building, as well as a paint tool to quickly change the colours of the bricks you have used if you don’t like them. In addition, throughout the game you will locate and be given as quest rewards plans for pre-built structures that can be placed immediately into the world with no real effort – things like a gingerbread house, or a pirate watchtower or a huge minifig statue.

The tools are available for you via radial menu which can be fiddly to use and the inventory system where all your discoveries are located could really do with a better cataloguing system as it becomes increasingly difficult to locate the items you require to complete the quests you are given. When you are asked to take a picture of a character in front of a leafy bush and you have at least ten items that look vaguely similar to that item it can slow down play quite a bit. Speaking of slowing down, there are significant framerate drops in certain areas of the game, often in those biomes with lots going on. Without fail whenever I came across a junkyard type area my game would slow to a crawl. Similarly, as the worlds get larger there can be quite a bit of chunk loading time which stalls momentum by placing invisible walls preventing your character from moving forward until the loading has finished.

Camera issues that have plagued the series for many years are still present as well with it often moving wildly about and obstructing your view. Some work has been done to resolve this with the ability to zoom in or out on your character and you can even zoom into first person for really tight areas, but the field of view is so narrow that it becomes quite dizzying to use for any extended period. There are also bugs that sometimes stop you from being able to complete a quest or pick up an item which can be very frustrating, however, thankfully there are so many different ways to obtain items you are only stalled for a short while.

Despite these issues which are not insignificant, LEGO Worlds is a delightful game. There is tonnes to explore and do and it is all delivered with wonderful whimsy in the character animations, the bouncy soundtrack and fantastic narration from Peter Serafinowicz. It is brimming with interesting ideas and it will be fascinating to watch and see if the community of players rallies around it in the way that the Minecraft community did, and we will be treated to some imaginative designs and builds down the line. For now though, LEGO Worlds offers an engaging, albeit slightly restricted sandbox to play around in.

LEGO Worlds is a delightful game, full of whimsy with tonnes of things to see and do. The draw of exploration is excellent as is the myriad of items to collect, but frame rate issues and quest bugs slow the gameplay down a bit.