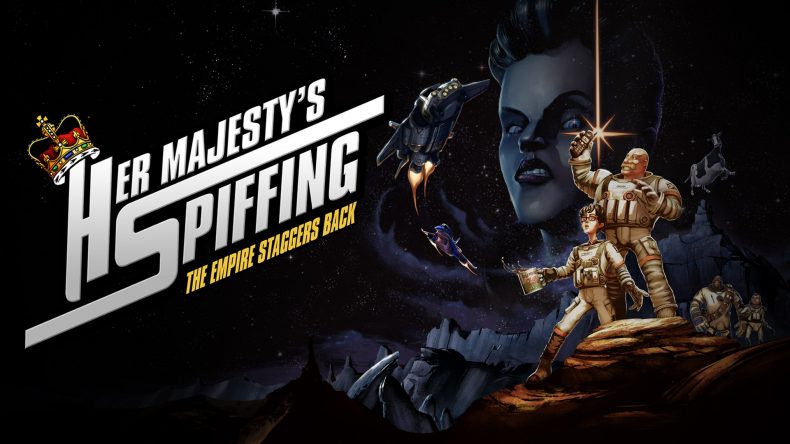 Not much has managed to drag my attention away from Super Mario Odyssey in recent days. Daniel “Dapper Laughs” O’Reilly’s inspirational redemption arc on Celebrity Big Brother is something that’s managed it, and the witty point-and-click adventure game Her Majesty’s Spiffing is another. It’s just a shame it didn’t stick around long enough to maintain my attention for long.

Her Majesty is set in some sort of horrific, nightmarish alternative universe in which the United Kingdom has gone nuts and nationalistic identities have roared back to the forefront. As a result ol’ Liz has become dismayed with the political turmoil in her nation and she has decided that she can no longer trust her inept government so has disappeared in a Big Ben spaceship to find new, distant worlds to conquer to create a galactic British Empire. What a crazy concept, eh? Aboard the HMS Imperialise, a mini-cooper-turned-space-shuttle, you play Captain Frank Lee English, who is accompanied by his Welsh sub-lieutenant Aled Jones, as they boldly travel through space in order to find new planets. Things immediately go awry and in true point-and-click fashion, it’s your job to find seemingly innocuous objects to solves a series of problems. Thankfully, unlike point-and-clicks of years gone by, the answers to every puzzle follows actual normal logic and with a bit of thought each puzzle is solvable. The only time I came into trouble is when I didn’t realise that I could interact with objects in my inventory, turn them around and such, which was often the solution to problems. So a little tip for you, there. Veteran fans of the genre may find the puzzles a bit simple, but I for one enjoyed the straight forwardness for a change.

Easily the best aspect here is the sharp and continuously funny writing. There are consistently hilarious jokes from start to finish, but there is a wide range of them, too. You have your obvious topical pokes at the EU Referendum, you have an abundance of meta, fourth-wall breaking jokes on video games and point-and-clicks especially, and the characters themselves playoff their obvious stereotypes in a knowing, humorous way. Frank is the star of the show and his “right good English gent” act is an easily recognisable pastiche on posh bastards, and it honestly got genuine laughs out of me on a number of occasions. My favourite line being, upon Frank seeing an electric fence: “Just like I told the boys on our rugby tour of the Netherlands in 87, I’m not touching that without protection.” Her Majesty’s Spiffing may genuinely be one of the funniest video games in recent times. The only thing that didn’t really land for me, and felt a little trite, was the French characters that were introduced. While they were just as stereotypical as the Brits, it felt a bit lazy and not as clever or self aware. It’s just a shame then that it’s over so soon. I’d say it’s a two hour job at absolute tops, depending on how much you struggle with the puzzles. It really just feels as if things are about to get going when the credits (which are also funny) start to roll. I can appreciate that maybe the developers didn’t want the game to outstay its welcome, but I was left thirsty for much more of the writing and the sudden ending made the whole thing feel unfinished. Especially since there were some creepy horror aspects introduced that never appeared again.

But, it must be said, being left wanting more is a much better way to end than being overly fatty. Her Majesty’s Spiffing is a funny game for the entirety and its a point-and-click game for those who may not get along with some of the convoluted classics of the past.

Her Majesty’s Spiffing has some of the sharpest, funniest writing I’ve seen in a games and it has the rare accolade of being a point-and-click adventure that follows actual real life logic. But it’s all over far too soon and leaves an unsatisfied feeling with plot threads just left hanging.