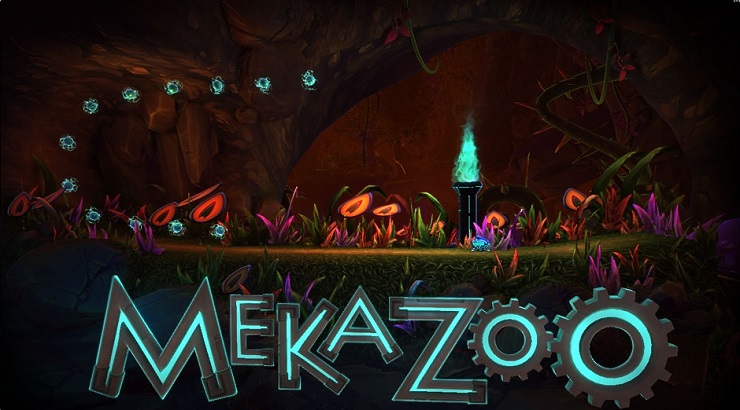 Remember that period during the early 2000s, when platform games were everywhere? Ratchet & Clank, Jak & Daxter and Super Mario Sunshine represented some of the very best games released during that generation of consoles. Then there were titles like Voodoo Vince, Tak & the Power of Juju, Sphinx and Whiplash that occupied a not-quite-good-but-not-quite-bad-either area of the market, and that’s the kind of place in which Mekazoo would be right at home.

Its description claims it to be inspired by “90s platforming goodness” and I expect the developer would like to think that Mekazoo has elements of Sonic, Donkey Kong Country, etc, and if you squint really hard you might see hints of those iconic franchises in there somewhere, but it soon becomes apparent that it’s more akin to those average, early 2000s efforts. You start the game as a mechanised armadillo, rolling around levels like a low budget, neon (this game loves its neon) Sonic the Hedgehog. You’re in some kind of facility, chasing an evil frog until you eventually have to fight it. You know the frog must be evil, because it’s red. The boss fight that follows is interesting, but a little awkward due to the controls and physics not quite fitting the situation. These issues become even more pronounced when you take control of the frog, as defeating bosses sees you taking control of those mechanical animals. The frog’s bounding is imprecise, in a game that requires precision for ninety percent of its duration, but it sometimes makes up for it once you realise that the frog’s tongue can be used like a rope, swinging you from grapple point to grapple point.

The third animal also has these control issues. Playing as a wallaby, its bounding is even more imprecise than the frog, and its special ability is to jump even higher (and wall jump) which just makes things worse. The wallaby’s jumps don’t always work properly either, which can lead to many, many deaths thanks to the glitchy controls. There are moments when you need to jump from wall to wall, going quite high, and sometimes the jump doesn’t register and you’re left hitting the wall before falling back down. Restarting sections like this just whittles away at your patience.

It does have an interesting switching mechanic though, which allows you to switch between the creatures you’ve unlocked to solve environmental puzzles. This usually boils down to switching on-the-fly, often requiring quick thinking to avoid death, and it can work quite well at times. The nice thing about it, is that you’re given set pairs to work with. This means that levels are designed around those specific pairings, but also contain challenges that require extreme patience if you want to find all the secrets and collectibles dotted throughout each level.

Speaking of challenges, each level offers challenges such as killing all of a certain enemy, as well as finishing it without dying or within a certain time limit. Each completed challenge rewards you with a gear, essential in unlocking later levels. This kind of progression system is archaic and can end up blocking many players from finishing the game, despite being able to finish all the levels available to them. Why do games still do this in 2016? It also doesn’t help that finding new levels can be a chore, as even the hub worlds are poorly designed and confusing to navigate. You can spend a few minutes fumbling around a hub, only to stumble across a level you can’t actually play yet.

The levels you can play before you inevitably end up having to go back to replay older ones, have some real design problems too. The first of which, noticeable very early on, is down to the visual style. Your characters often blend into the background and that already makes it an issue, and when you’re needing to make decisions quickly but can’t see your character? Poor design. Now, one of the boss levels is so badly designed that I genuinely needed to take a break before attempting it again. It sums up the bad design of both level and character movement, and brings to mind a third design flaw that makes this battle all the more infuriating: checkpoints.

Mekazoo’s checkpoints are so badly placed (or worse: not placed at all) that you’re often forced to replay sections of a level over and over, thanks to a combination of all three design problems. You might get through a particularly tough area, then the wallaby will decide not to wall jump, dropping you to your death, only to find that you’re forced to retry that tough area again due to the horrendous checkpoint placement. Again, how is this a thing in 2016? There’s no excuse for this.

Mekazoo is not a terrible game. It shows genuine flashes of fun, and its characters are colourful and cute, and that’s why I will compare it to those average early 2000s games mentioned at the beginning of this review. The fact that it repeats the mistakes of those games, released two generations ago, shows that Mekazoo is a game out of time.

Mekazoo wants desperately to be in the company of Donkey Kong, Mario and Sonic, but can barely rub shoulders with Blinx the Time Sweeper.