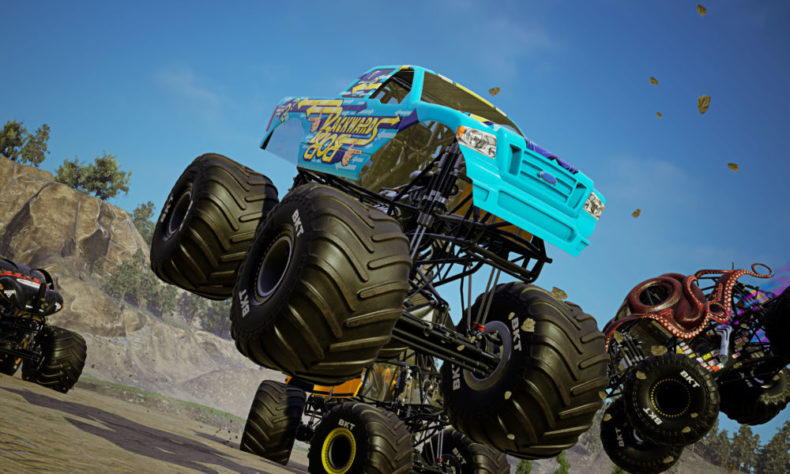 Monster trucks have been a staple of American culture since the 1970s, and whilst I know very little about the various real life competitions or the vehicles themselves, getting behind the wheels of one in Monster Jam Steel Titans 2 made me understand the appeal. Engines roar louder than a T-Rex with a stubbed toe, and metal crashes against trailers, rocks, and other trucks as you take part in various events to prove you are the best in the business. Whilst it all sounds quite exciting, there’re some core elements that haven’t been completely fixed since its predecessor released in 2019.

Rainbow Studios has definitely taken on board feedback regarding the way the trucks handle, but there are still some problems when it comes to the smallest of obstacles. There were times when clipping something as small as a pebble threw me onto the roof of my monster truck, and when racing off-road against AI, it became a nightmare if you even tried to race over a hilly area. They are surprisingly fragile for the hulking behemoths they appear to be, and more often than not I’d be on my back more times than a contestant on Love Island. 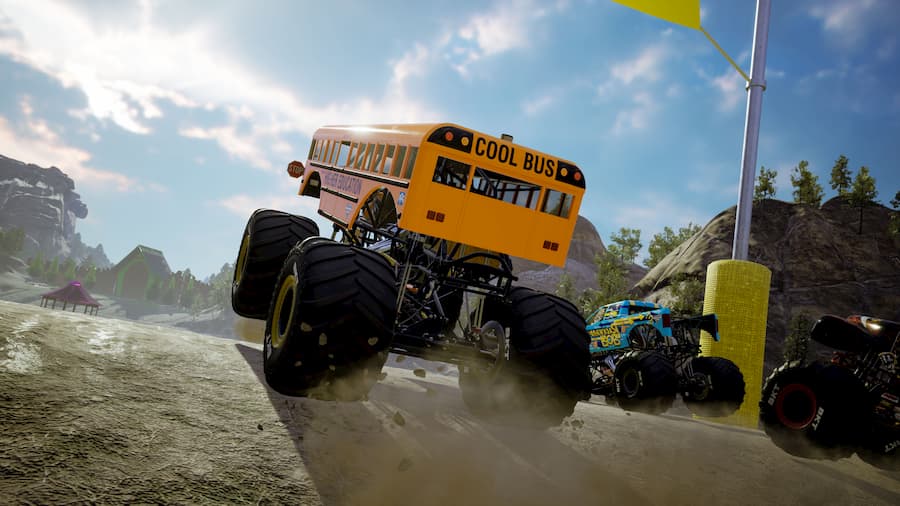 Monster Jam Steel Titan 2’s bread and butter is the Career mode. Whilst there’s no context to your racer and their motivations, you will take part in multiple events across the game’s various locations. You’ll take part in freestyle challenges, head-to-head races, and stunt races that only count two-wheeled manoeuvres to your score inside stadiums, as well as checkpoint races and more without the confines of a crowd. There’s a fair amount of variety in what you can do, but it’s the delicate handling that often lets it down. When you’re racing around a flat track, the handling is pretty decent, with the left stick controlling the front wheels and the right controlling the back. Taking corners is more than tight, and once familiar you’ll rarely make a mistake.

As for pulling off stunts, you can wheelie, flip yourself over, and perform donuts to the cheers of your audiences, but clipping something awkwardly or hitting a ramp at a slight disadvantage will make you land on your back. You can press a button to put you back on all four wheels, but it breaks the momentum you may have had, and also cancels out particular combos you were doing. For such big machines, it always felt like they weren’t as heavy as they should be, giving me no sense of control in many of the events that shouldn’t be as challenging as they were. 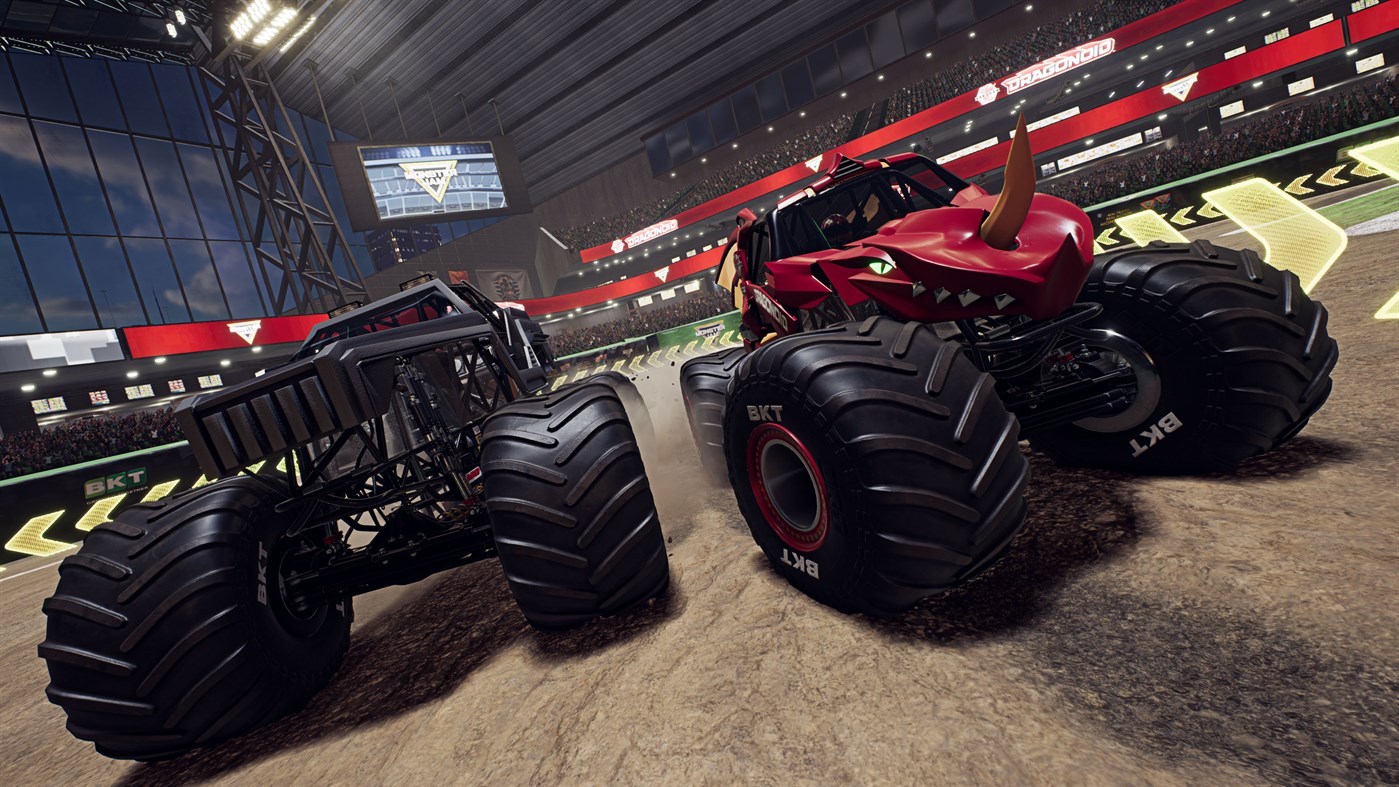 In certain races outside, tracks aren’t signposted as clearly as they should be. In almost every racer, you can clearly see the next turn in front of you thanks to signs telling you to turn left or right, but more often than not in Monster Jam Steel Titans 2, you’re not seeing the route you should be taking. When you pair this with the poor handling over rough terrain, it becomes hugely frustrating, especially if you started off strong and find yourself shunned to the back of the line. You are rewarded throughout your career with new trucks, and as you progress through the chapters, you’ll end up unlocking some real beauties. Trucks you own will also level up, improving their handling, speed, and other abilities.

Outside of the Career, you can free roam across various semi-open world locations that offer you collectibles to find, and other challenges to take part in. It was here where I had to practice racing on tougher terrain. It was something I never had a complete handle on, but racing across mountain ranges and uneven grassland certainly helped. The more you progress, the more locations you can explore. Whilst these collectibles give you something to do here, it’s rarely something I spent a great deal of time with. You have to hand it to Rainbow Studios when it comes to the variety of trucks, though. Whilst I did often struggle to master the controls, the wide range of trucks on offer always made it fun to try out my latest acquisition. 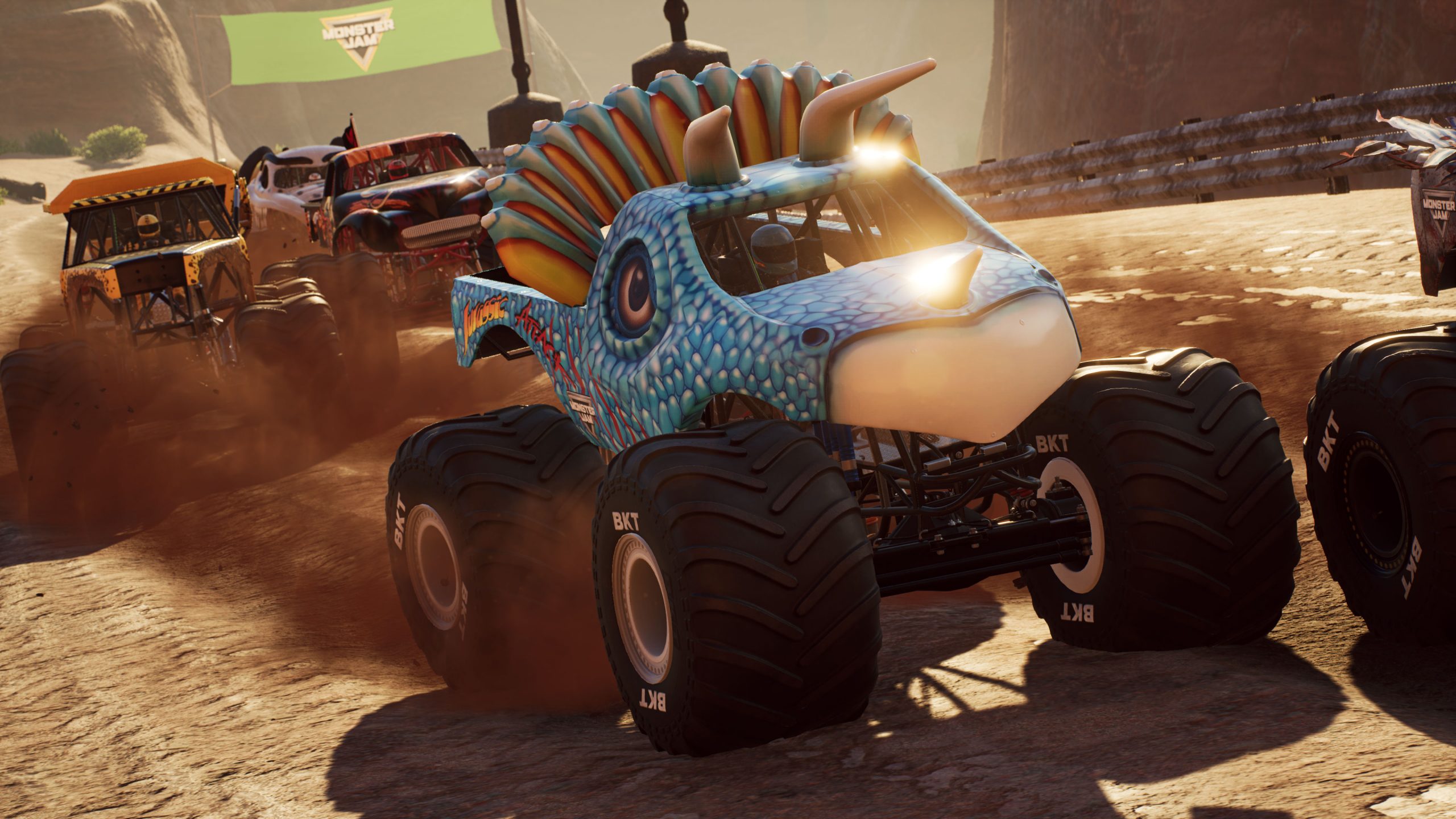 Whilst Monster Jam Steel Titans 2 may not have the best looking visuals, especially when it comes to the bland outdoor environments or the familiar arenas, the trucks are colourful, and the detail in the various designs look great. Unicorns. zombies, dogs, and bulls are just some of the various designs, but I’ll always have a soft spot for my ice cream van. There are seldom modes outside the Career, but you can take part in Championships that sees you blast through a playlist of events, and Quick Play allows you to hone your skills across the various events. The game has online when it launches, and I hope I’ll get to have some fun with other players.

Monster Jam Steel Titans 2 has some issues with its handling, and trying to pull off skills in a busy arena often leads to moments of frustration. Despite these flaws, I did have fun when it came to the actual racing events. The AI seems more balanced and smarter than before, and assuming you can remain on all four wheels, you’ll enjoy a decent challenge whatever the event. I’d like to think these problems won’t hinder player enjoyment, but it did affect mine, leading me to think it’ll do the same for others.

Monster Jam Steel Titans 2 may not be the prettiest, and the handling can be a pain, but there's plenty to unlock and more than enough events to get stuck into.