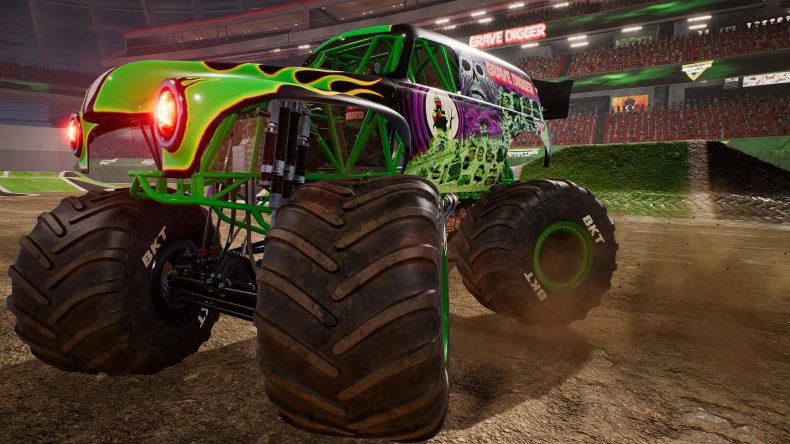 Coming off the back of F1 2019 and its realistic representation of circuit motorsport, I felt like a more over-the-top, off-road racer would be the perfect way to let off some steam. That off-road racer comes in the form of Rainbow Studios’ Monster Jam: Steel Titans. Honestly, after I enjoyed the anniversary edition of the studio’s last game, MX vs ATV: All Out, I was in a good mood when I loaded up the game.

Now, the tutorials kicked things off by introducing the basics and asking me to take part in a few races to get the hang of the strange handling system. The default setting is to have all steering on the left stick and, before you ask how it could be any other way, that has all four wheels turning. It feels weird at first, but you get used to it quickly despite it being a little overly sensitive. Should you want a bit more control, you can elect to change over to the two-stick steering system, which has the left stick controlling the front wheels and the right controller the rear. Either works fine, but I honestly found it far too much work to control each set of wheel independently, especially when you’re taking part in Freestyle events. You see, Monster Jam is a real series in which bizarrely-painted monster trucks compete in stadium events all over the US and Canada. These events are a combination of standard races, freestyle events and two-wheeled challenges. Freestyle features tricks and feats of amazingly-controlled daring, with flips and rolls and all manner of physics-defying things that just shouldn’t be possible. On top of that, the two-wheeled challenges are the same as freestyle, except they must be combined with at least one trick that has the truck on two wheels.

A bit of internet research gave me that information. The game didn’t bother, even in the tutorial that is inexplicably optional, which is doubly bizarre when you realise that these events form a third of the entire career mode. Yes, I expected something to do with two-wheeled tricks, but the game doesn’t even teach you how to begin performing these stunts and even when you do find yourself learning through trial-and-error, the horrendously twitchy physics usually spoils everything anyway. I can’t tell you how many times an unseen object or piece of terrain had me flying, flipping and rolling around like those flyaway footballs I used to kick around the beach when I was a kid. It’s often difficult to straighten up your trajectory too, meaning that even when you do aim for a jump, you’ll probably find yourself corkscrewing your way through the air and landing on your roof. Hell, if by some miracle you land on your wheels, it’s only a matter of time before the twitchy physics decides to throw you around again. I’m not entirely sure I’ve ever played a more frustrating game.

The only times I did find myself enjoying the game was when taking part in circuit races, or the odd checkpoint race, which don’t really appear in the career mode. Unfortunately, there are barely any tracks for these other modes, which is a shame because it feels like these races should have formed the biggest part of the game’s main mode. Circuit races have you racing around a set path as you would in any normal racer, with very little opportunity for the game’s physics to screw you over. The same can’t be said for the checkpoint races, which have you darting around an open map, making your own way to each checkpoint as they appear. They can be decent fun, only due to the open map and natural terrain, those unseen rocks and bumps do love to turn your world upside down. Resetting your truck often leaves you so far behind the opposition that you may as well just restart your race, though career mode doesn’t even give you that option. You either finish or you quit, which makes those random physics issues all the more problematic. Speaking of random, Monster Jam: Steel Titans does have a framerate that likes to chug at times. It’s not exactly a looker either, with basic textures and effects, not to mention some poor draw distances as foliage pops into view with a remarkable disregard for immersion. All this was happening on the Xbox One X too, which just seems unacceptable to me.

Considering the quality of MX vs ATV: All Out Anniversary, it amazes me that Monster Jam: Steel Titans is in such poor shape. Fans of the real thing might get some kicks out of it, but everyone else will be bored within an hour or two, or raging at the awful physics ruining yet another event.

I think it’s safe to say that this game is most definitely not my jam.

Framerate chugs at times, even on Xbox One X
Tutorials don’t actually teach you how to do things you need
Open hub world feels pointless and takes ages to load
Physics are way too light, with trucks flipping too easily