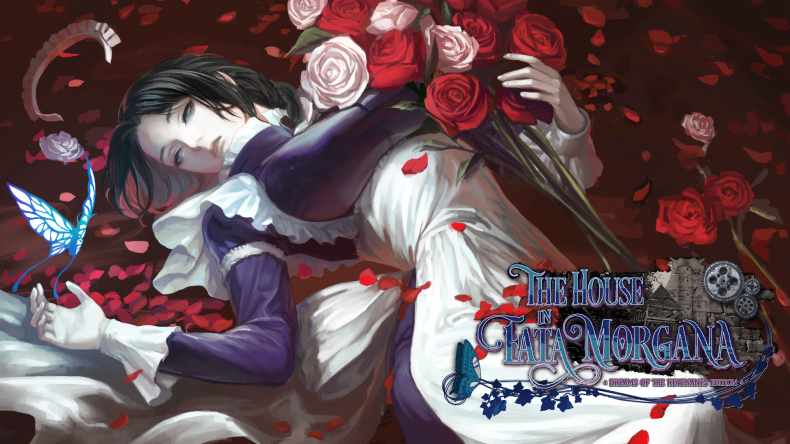 Ever since I started playing visual novels and looking at what to play next, a few names kept getting recommended to me. One of them was The House in Fata Morgana by Novectacle. The House in Fata Morgana debuted on PC in English a little under 7 years ago. The Gothic suspense story that spans various generations would go on to not only become a strong contender for my game of the year but likely be my favourite visual novel of all time and one of my favourite stories in gaming ever.

As with most visual novel or adventure games, a PC only release meant it is super low priority for me because I find it very hard to play these kinds of games on non portable devices. When Limited Run Games / Mighty Rabbit Studios announced they would be publishing a complete release with upgraded visuals, and more for PS4 and PS Vita, I knew it was finally time to see why everyone kept recommending I play this game. Ever since the end of May this year, I’ve been making progress and playing every day on both PS4 and PS Vita and the end result is very interesting on both platforms. The House in Fata Morgana: Dreams of the Revenants Edition includes the main game, A Requiem for Innocence which is a companion game, and something never before released in English. Reincarnation is a voiced episode that is the only portion of this release featuring voice acting and one that is localised for the first time. This release also includes Short Stories that is yet another portion never before available in the West. All of this together makes this the most complete and definitive release of The House in Fata Morgana. It also features a music player and art gallery.

The House in Fata Morgana has a very interesting way of presenting the story to you. It begins with you waking up in a broken down mansion with a woman standing in front of you. You can’t remember your name or basically anything. The woman introduces herself as the maid of the mansion and asks you to come along to recollect your own memories by seeing what has happened in the mansion over generations. I absolutely don’t want to spoil the story but I will say it never seems to falter with delivery and has your attention almost all the way. Novectacle makes sure you spend hours getting attached to characters before making you regret doing it, but not in the same way the Danganronpa games deal with things. Everything feels more grounded and real here even though this is a story spanning different periods.

There is one moment about 75% into it where I feel like it struggled to maintain the rock solid pacing and felt tedious. This didn’t last long and the highs after this low were beyond worth it. The story is full of betrayal, love, conspiracy, death, grotesque imagery, and more. The House in Fata Morgana itself has multiple endings and some decisions require you to think quickly because you only get a few seconds to decide. Thankfully it also has tons of save slots so make sure you use them. The way everything comes together for the true end is magnificent. Novectacle has patched in a very nifty feature on PS4 (there has been no patch on PS Vita yet) that lets you rewind. Most visual novels include skipping text that you have read or all text until you reach a choice. The House in Fata Morgana: Dreams of the Revenants Edition lets you rewind back to choices or even before. This is great for when you select a wrong choice and want to get back without having to reload a save you may or may not have had. Auto save is also implemented at every choice and this causes the game to take a few seconds before a choice is displayed to you. It is a bit annoying because you can always tell a choice is up next when the game freezes for a few seconds with no text box to be followed by the choice box.

There are loads of ways of bringing older visual novels to newer hardware. If a series is popular enough to get an anime, the Steins;Gate Elite approach is an option and that worked out really well. The new Yu-no remake that is seeing a console release later this year has completely redone art that hasn’t pleased everyone. For The House in Fata Morgana: Dreams of the Revenants Edition, the CG art has been adapted for widescreen and much higher resolution displays. The original game was made for 800 x 600 displays while this one has PS4 Pro support and even looks great on PS Vita. I love that the Vita version can be played with the touchscreen which is my favourite way of playing any visual novel. A few of the CGs have been cropped for widescreen, but having spent over 60 hours in the collection, I have no complaints about the art at all. I adore the very unique art style Moyataro has for the main game. Novectacle manages to even make the text boxes look absolutely gorgeous with subtle artwork changing per character. Before getting into the music, only Reincarnation is voiced while the rest of the release doesn’t have any voice acting. The lack of voice acting is more than made up by the superlative atmosphere and music thanks to the audio design. The soundtrack features vocals but it has a very otherworldly feel to it reminding me of NieR: Automata‘s score. The tone the soundtrack has varies just like the story and it includes a generous serving of happy upbeat music with loads of atmospheric and relaxing songs. A few hours into the game, you will be very tempted to just play the music on your streaming platform of choice, but the soundtrack is too powerful in game to lose any impact by listening to the songs outside the game before experiencing them in-game.

I’ve praised this collection a lot so far but barring the pacing issues in one portion of the latter half of the game, the biggest real downside to this release is the long load times for choices when the game is doing an auto save. If you do own a PS Vita, you will be glad to know that this release is cross buy letting you buy it once and get both versions, but the caveat is that there is no cross save. This ensured I just stuck with PS4 for a majority of my playthrough since I wasn’t interested in fast forwarding when I switched from console to portable. The House in Fata Morgana: Dreams of the Revenants Edition is worth it not only for new players, but also fans of the original game on PC because it has enough content to justify getting the new edition. Players who have already played the base game, but only want the new content can use a nifty back door feature to unlock everything as well. The House in Fata Morgana is a story I won’t be forgetting for a long time. I’ve not stopped listening to the soundtrack ever since I finished the true ending and only want more visual novel fans to experience this. I’m very glad I refused to watch any trailers before playing this and went into it without knowing anything about it. It is a haunting and magical experience.

Some pacing issues
No cross save

The House in Fata Morgana: Dreams of the Revenants Edition brings one of the best stories in gaming to consoles for the first time and it is a must play game.