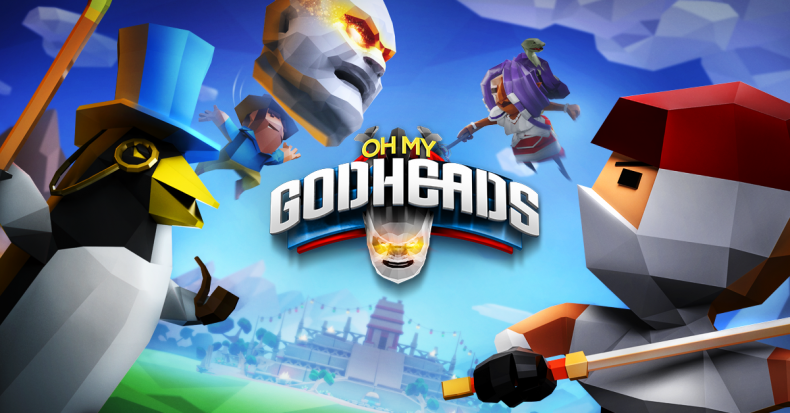 With Christmas approaching at a rapid pace, the days of family meet ups and seeing people you only see once a year is nearly upon us. But instead of awkwardly watching the Royle Family Christmas special again, a couch co-op game with good humour and a competitive edge is sure to get everyone’s spirits up. Oh My Godheads could be just the game. Its a fast-paced, 1-4 player brawler with the added bonus of massive heads based off mythological beings to mix things up a bit.

There are five different game modes, with four of them being based on arena style battles. Capture the Head, as you can probably deduce, is a classic Capture the Flag mode in which you have to carry the head back to your goal for points. In King of the Head, however, points are earned by keeping hold of the head for a certain amount of time.

These game modes are kept fresh by the various deity noggins which are different on every map. Norse goddess Skaði will turn you into a block of ice should you keep hold of her too long, whereas Zeus will rain lightning down upon you. But Bastet of Ancient Egypt, as cats tend to do, just sabotages you by making you run the wrong way from time-to-time. There are ten maps, which are pretty with a similar art style to fellow Square Enix Collective title Stikbold, and ten different Godheads, all of which can be played on any map, so enough variables can be changed any different game to keep things interesting. Game modes Headhunters and Last Man Standing leave the heads out of the equation and are more straight up brawlers. You run about with your character and slash at the enemy with swords and can even hurl weapons, including exploding pies, at them. Connecting with your sword is surprisingly satisfying, as there is quite a meaty feel to the combat. The quick and nimble pace of Godheads also leads to some nice maneuvers, and if you finish them off with a kill even better.

The final game mode is actually single player. A series of ten trials that can help you hone your skills and unlock some extra content as well.

While Godheads can be played in single-player, I wouldn’t recommend it. The AI isn’t particularly intelligent which makes playing with a computer team mate frustrating. The King of the Head game mode is especially annoying as that game mode requires the most co-operation with a teammate, but they rarely make themselves available to receive the head or help take out enemies. Playing against the AI isn’t quite as bad. They do feel competitive but they are prone to some stupid mistakes, like throwing the head out of play when under no pressure what so ever.

So while Oh My Godheads is fun to play with friends, especially if you’ve got four controllers on the go, the AI isn’t smart enough and there isn’t enough depth to the game to sustain a single player.

Oh My Godheads is a 1-4 player, fast paced brawler based around massive heads of mythological deities which are out to get you. While it’s a lot of fun with friends, a lack of depth and poor AI mean it’s not so much fun without any.

Oh My Godheads is now available on PS4, Xbox One, and Steam

Oh My Godheads is available now on Steam Early Access