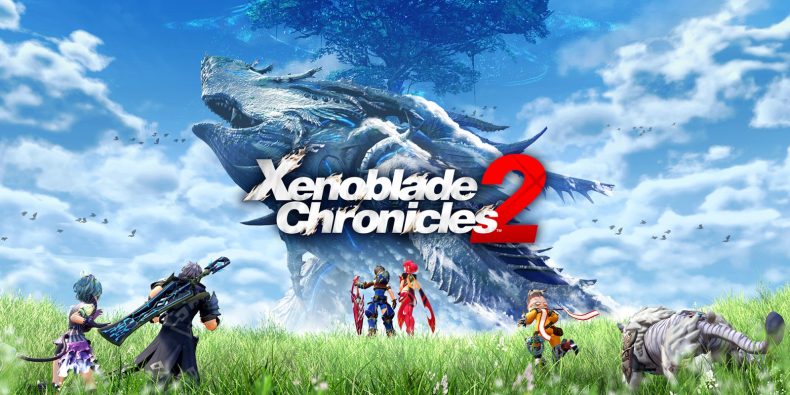 A lot of people will look back at 2017 as Nintendo’s best year in a long time. I will as well given how great it has been for Nintendo as a publisher and for anyone with a Switch. When it was initially revealed, few expected Xenoblade Chronicles 2 to release in 2017. I was one of the people who didn’t expect this in 2017 as well, but I’m glad they proved me wrong. Monolith Soft has not just released a great JRPG but surpassed almost all expectations I had for this release. Xenoblade Chronicles 2 is a massive game that has a few shortcomings but it’s a perfect end to 2017 on the Nintendo Switch.

If you haven’t played any of the two previous Xenoblade games, there’s no need to worry. While this is a sequel to the original Wii and New 3DS title, Xenoblade Chronicles 2 can be enjoyed on its own. Newcomers to the series need not worry about complex systems because the opening hours here do a fantastic job of getting you up to speed with almost everything you need to enjoy this massive game. There are also a lot of great quality of life improvements and also some missteps when it comes to gameplay here.

Unlike Xenoblade Chronicles X, story is a big focus here. The main characters in your party and some of the NPCs are brilliantly written and I definitely got attached to the cast just like I did when I played Dragon Quest VIII earlier this year on 3DS and Final Fantasy X on Vita a while back. Rex initially lives on a Titan and then he meets Pyra in quite the dramatic turn of events. The bond between Rex and Pyra growing through their journey has been amazing to see. Tora with his quirks makes many of the heart to heart moments early on quite memorable. The banter between party members during and after combat has also been a highlight. I was a bit concerned about the story given the short development cycle but my fears were put to rest early on and I’ve enjoyed every aspect of this story in the 70 hours I’ve put in. The team has even made side quests and town development worth doing with small story bits. More on that in a bit. A massive world to explore has become a highlight of the Xenoblade games and it is brilliant here. While Xenoblade Chronicles had two massive titans housing the world you’re on, we have multiple titans as the world in the cloud sea. This world is full of things to do, people to talk to, monsters to slay, and many monsters to avoid because they are far too high level for you initially. There’s a day and night cycle with weather and the cloud sea tide to take into consideration. Some quests or items will require you to go to a certain location that will only be accessible at a certain tide for the cloud sea. This can be changed by resting at an Inn as well. Inns also have another important purpose when it comes to levelling up.

Freedom to do things at your own pace is definitely one of my favourite things here. While you could rush through the story by just going through the main quest, there’s a lot to do on the side. I found myself doing more exploring on the go and spending my playtime docked doing the main story. The world can get quite dangerous and if you see monsters that are double your own level, it maybe better to come back later. I encourage exploring and going outside the main quest line just to check out the amount of effort that has gone into the world. There are usually rewards waiting as well in the form of landmarks that you can fast travel to with treasure or collection points.

Walking into a new town or hub area is awesome because it is another place full of life with things to do and shops selling the various types of items and equipment you need. Buying things, interacting with people, and doing quests for people here will bring the development of said location up and this unlocks more quests or better items and prices. The best part about all these systems at play is you can completely ignore or get involved with them initially. You’re never really forced to do these things but those who lend a helping hand are often rewarded. Side quests will take you on long trips in some cases looking for items through salvaging which is a QTE that lets you pick up items and treasure along with an enemy sometimes. When I mentioned improvements over previous games, this extends to combat as well. In fact this is the rare game where I enjoyed combat enough to just engage monsters for fun and not grinding. Instead of spending time in menus and scrolling through skills, you have control over 3 skills and a special for each blade. Speaking of blades, you can carry up to 3 blades and switch between them during combat. There’s an auto attack that is filling up your basic attacks that in turn fill up the special. There are multiple tiers to specials as well and executing blade combos is another in combat mechanic to keep in mind. Initially the intricacies of combat weren’t explained well and I urge you to experiment a bit with lower level enemies when you need to get the hang of certain things. Chain attacks also make a return and they feel a lot better here than they did in Xenoblade Chronicles. I’m a bit shocked at how much better the combat feels. I expected some basic improvements and nothing more to combat but this feels amazing.

Blades are obviously a big part of it and they have their own skills that grow the more you use them. You will get a ton of Common Core crystals that you can bond with for Bladed and also chance upon a Rare one. The Rare Blades that have been shown off over the last few months are quite rare. What Rare Blade you get depends on RNG. There’s a lot of mixing and matching you can do with your party and blades to see what best works for you. Things are that flexible here. Tora’s Poppi is very unique and she has her own mini game you can play to upgrade her.

It is fun coming back to an old area only to take out the enemy that wiped your party out in a single hit early on in the game. There is a lot to see once you are able to explore the more high level early areas of the game as well and I encourage revisiting as far as possible. If nothing else, you will get to hear some of the amazing music once again. One of the big changes everyone noticed with the reveal trailer was the stark contrast the art style has to Xenoblade Chronicles. The anime art direction has allowed for vastly better animations in game and in cutscenes and some great facial expressions. Outside of Rex’s pants that are like that for story reasons, I like almost everything in the art side of things. Nomura’s designs are highlights for sure but the art direction for the world is stunning. It is sad that the technical side of things doesn’t hold up as well.

I mentioned how I expected the story to not wow me as much as it did but the one thing I didn’t expect is the technical problems here. If you’re playing portable, things look pretty bad while exploring. The game uses a dynamic resolution that scales depending on visual load. The good thing about the implementation is the UI remains native and looks crisp in handheld. I’d be a bit more forgiving to the visuals if they were done to keep the performance solid but even that suffers in both docked and handheld modes. In docked, rain in a town with a lot of NPCs brings the framerate to a crawl almost. I’d recommend playing this mostly docked if you can because the dynamic resolution and end result are much better than what you will see on the small Switch screen. You can even zoom in the camera as much as you want. I experimented often and even zoomed into a first person mode in some areas. The other big issue with visuals involves fast travel. When you use “Skip Travel” to get to another place through fast travel, after actually getting there, you have to wait a few seconds for the environment textures and shadows to load. Screenshots are also blocked during these few seconds. I wish the loading was increased so people didn’t have to see this.

Unlike many, I love Xenoblade Chronicles X’s music. While not as good as the original Xenoblade Chronicles, I found Sawano’s score just as good if not better than his work in anime. Now that most of the team from the original returned here and has had more of a Yasunori Mitsuda touch, I can safely say this is one of the best soundtracks in JRPGs in a long time. It maybe even Mitsuda’s best work after Chrono Trigger (Yes this includes Chrono Cross). The town themes are lovely and catchy and battle themes get your adrenalin going. It blows me away just how amazing and varied the battle and boss themes are here. There’s a lot to love and I can’t wait for the full soundtrack to be released later on. Outside of the technical issues, there are two aspects that made me feel like this game needed a bit more work put into it. For one, treasures and loot from enemies can sometimes fall into locations you can’t access. I don’t mean fall off a branch or something but in some town locations, a single loot item can fall into a portion of the shop or room you can’t access. This is annoying. The other problem is navigation. The map and in game compass need some fixing because sometimes there’s overlap between multiple quests hiding some quests. The large map is almost useless as it just adds an overlay that you can’t control. You will be forced to look at the fast travel map more often than not for quests. I really hope the navigation and map are improved.

It has been amazing seeing a new Xenoblade game return to a story focus after X. I’m more than up for alternate games like this. This could become like Forza where you have Motorsport and Horizon alternating with some fans playing either type while others enjoy both. The world here can get magical in a lot of places and any fan of JRPGs needs to buy this. While many people bought a Switch for Mario or Zelda, Xenoblade Chronicles 2 is Monolith Soft’s magnum opus on the Switch. They proved us all wrong by releasing this in 2017.

Visual issues, more so in handheld
Navigation gets annoying sometimes

Xenoblade Chronicles 2 gives you a massive world to explore with a lovely cast of characters that come together brilliantly, but it suffers on the technical side of things.