previous
The Last of Us Part 1 review
random
next
Gerda: A Flame in Winter review
0 likes 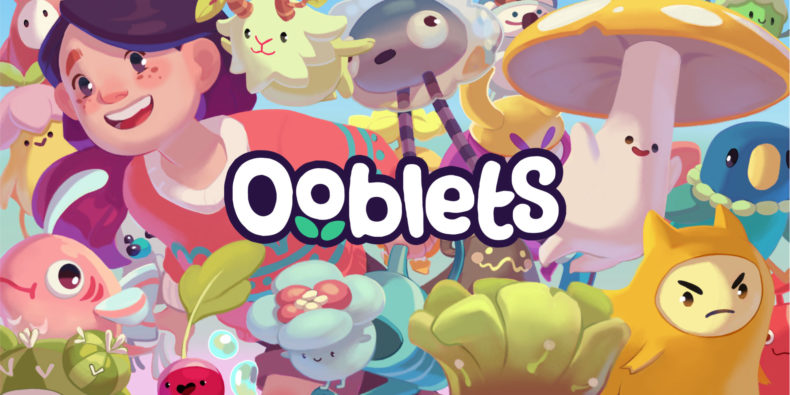 It pains me to say it, but I’ve never really gotten hugely invested in a farming game before. I hear such wondrous stories about Stardew Valley and old Harvest Moon games, but I’ve never really seen the appeal of watering my crops over and over until I make some profit then doing it all over again. Well my curse was finally lifted recently, and it’s all thanks to Ooblets.

After living their whole life in a big city where the adorable titular creatures are banned, our protagonist sets off on a ferry to the idyllic seaside town of Badgetown. When they arrive the lovely mayor (an adorable young girl with a rainbow top hat) offers them a free house if they help out around town, so obviously it’s time to do some chores.

If you’ve played a farming game before you likely know what’s coming next. That’s right – a hoe, a watering can and a few packets of seeds. After clearing your little field of logs and rocks, you’ll need to till the ground, pop some seeds in and give them a little sprinkle with the watering can. In a few days you’ll have your very own crops just waiting to be harvested.

You might not want to rush to sell your crops right, because those cute Ooblets you can see wandering around town might want them. Each species of Ooblet has a different item they desire, and if you bring them what they long for they’ll happily challenge you to a dance battle. Trust me, it all makes sense. 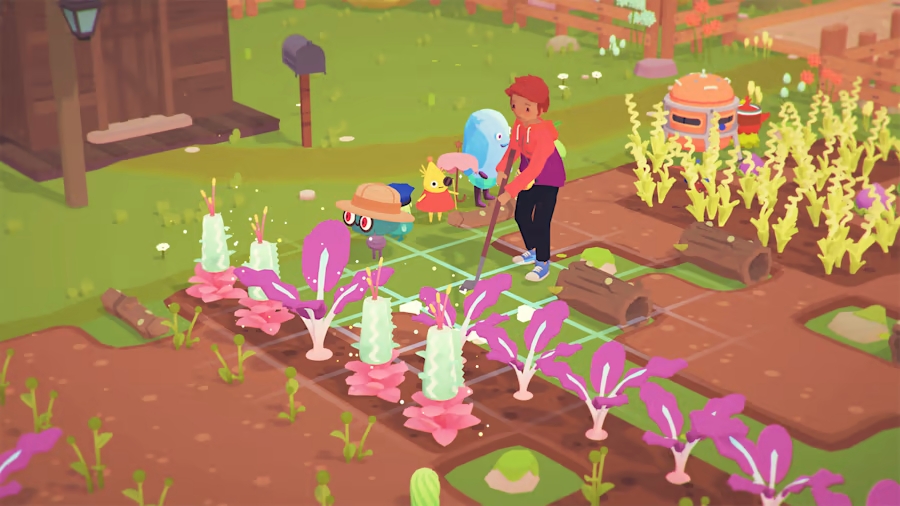 When you first arrive on the island you’ll be given your first Ooblet, but if you want an army of the little cuties you’ll need to put on your dancing shoes. Dance battles take the form of turn-based card combat, where the team of Ooblets that scores the most points win. With a limited amount of Beats to spend each turn, it’s up to you to figure out which dance cards to use them on to maximise your total points.

Different Ooblets have different dance moves they’ll bring with them into battle. There are moves that boost the power of your other cards, moves that steal points from the enemy team and moves that shuffle useless cards into the opponent’s deck to clog up their hand. The dance battles start off fairly simple, but before long you’ll need to use all your brain power to beat the other Ooblets and win a seed from them to grow one of their species for your own.

As well as helping in a good old fashioned dance off, Ooblets are also happy to help you run your farm. Once you’ve built them a place to live, you can leave them at home with chores and they’ll happily water a few of your plants or do a bit of weeding. These Ooblets are certainly more than just a pretty face. 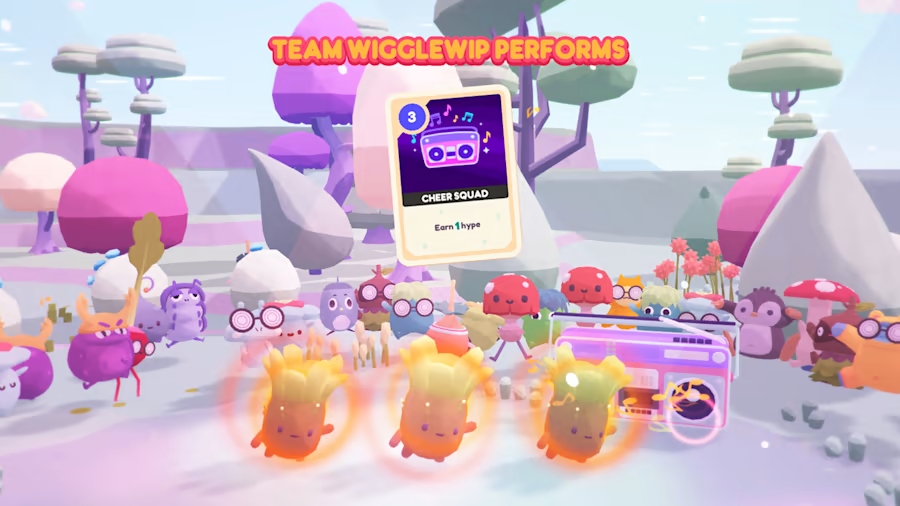 Whether it’s through selling crops, cooked food or scanning your new Ooblets at the science lab, there are plenty of ways to make money (known as gummies) in Ooblets. What you do with that sweet cash is totally up to you. You can spend it on new seeds and farming equipment, fancy new threads, or even furniture and home upgrades if you want your house to feel more like a home. Whether you want to play Ooblets like Animal Crossing and play house and dress up or just invest harder on your farm, Ooblets has you covered.

If looking stylish, throwing shapes and growing funny named veggies isn’t enough for you, you can go out and be a social butterfly instead. Each of the entertaining characters that inhabit Badgetown have a friendship meter that you can fill up by chatting to them every day and completing tasks for them. It’s worth filling up that bar because when you do you’ll be given some fantastic rewards, like hats for your plant buddies or an annoying flute you can toot everywhere you go.

As well as all your standard farming duties, you’ll also be given missions from the mayor to progress the story and unlock new locations and buildings. Often these will involve collecting a pile of materials or winning a few dance battles, and they always come with a great reward. Early on you’ll open up the dance hall to put on tournaments with huge prizes at stake, then you’ll be tasked with repairing a villagers hot air balloon so you can travel to new places and collect new seeds and Ooblets. There’s always plenty to be working towards in Ooblets, and I think that’s the biggest reason that I’m so smitten with it. 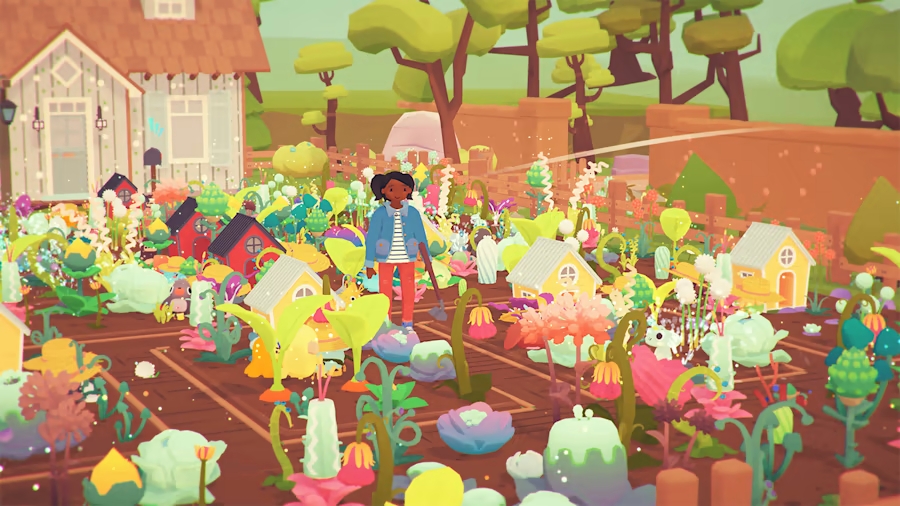 The writing certainly helps too though. Ooblets never takes itself too seriously, or even slightly seriously. The characters are outlandish and entertaining, the dialogue is very tongue-in-cheek and even the item names are ridiculous. You don’t fish in Ooblets, you “Sea Dangle”. You don’t gather wood and stone, you collect “Planklets” and “Nurny”. In a more serious game this would probably be a bit tiresome, but in the silly world of Ooblets it just works.

None of this would be so delightful if not for the visuals. The pastel art style is an simply gorgeous, and the colourful characters all make such an impression at first glance. The music is fantastic too, with an understated silliness throughout that just fits the tone of the game perfectly.

I played Ooblets on the Switch, and it does struggle a little on the platform. The main issue (as it so often is) is the framerate. It drops below 30 FPS pretty regularly, and if that’s something that normally bothers you then you’ll have to take it into account before taking the plunge. It was never enough to distract me too much from the farming fun, but others will feel differently.

Ooblets is a farming and creature collecting game that ensures you always have something to keep you busy. Whether you like decorating, digging, or dancing, there’s sure to be an aspect of Ooblets that appeals. Some will struggle a bit with the Switch performance, but if you’re able to look past it you’ll find a silly little world you never want to leave.

Framerate issues on Switch
Will be too cutesy for some

Ooblets is a delightful and silly farming game with plenty to keep you busy, but the Switch performance might some off