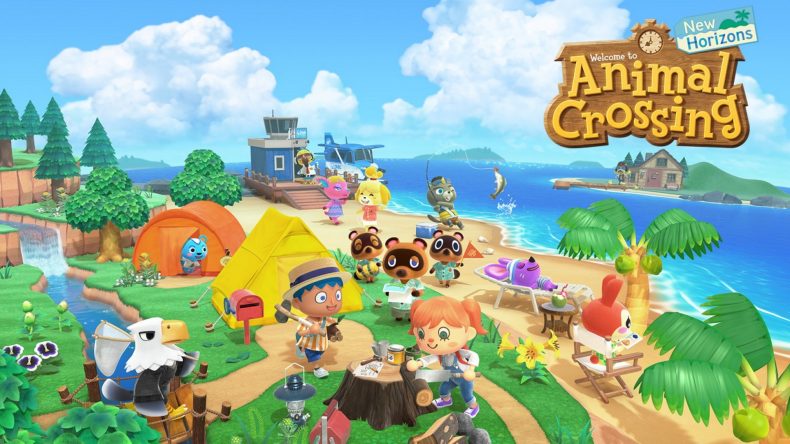 It’s hard to imagine a time the world has needed a new Animal Crossing more than right now. You can complain until the cows come home about Nintendo being too kid-friendly, or lacking any edge, but honestly, right now, the chilled out world of Animal Crossing: New Horizons is all we need to drift away from the horrifying realities of day-to-day life we all face.

In truth, it’s not that New Horizons does an awful lot new, either. Yes, it’s had a glorious lick of HD paint to bring our favourite characters (and Tom Nook) into the modern era, and yes, it runs beautifully and looks lovely. In fact, a new favourite thing of mine to do is walk into someone’s house and then back out, to see them greet me and then do a lovely nice smiley wave as I leave their presence. Animal Crossing is all about you; your time, your island life, your whims and needs — it doesn’t want you to shoot anything other than a present from the sky with your trusty slingshot: it’s just nice. This is a game where you can do everything and nothing based on how you’re feeling that particular day. Feel like mooching around and chatting to your friends on the island? That’s fine. Fancy clearing your newfound home out and rinsing it of fruit, ore, fish, bugs, and trees to make money to pay off your loan and build an extension? That’s fine. Want to invite your real-world friends over to trade fruit? All good. It’s the ultimate game for those who like to potter, or those addicted to the grind, and the grind is very real.

New to Animal Crossing on Switch is a system called Nook Miles. While you’d normally sell everything that isn’t nailed down for the Bells (and that’s still a thing you do), you are rewarded for simply playing the game in a new manner. Veterans will rack up Nook Miles instantly just because they know the systems and what you “do” each day you log into New Horizons. Nook Miles feels at once a system to aid newcomers, funneling them into the ideals that make the systems work, but also a way to make you think about what you do and when.

On top of that, a new DIY system adds some Minecraft-like ideas into the mix. Whereas in the past you’d start the game slowly, shaking trees for fruit in order to sell to buy tools, here you need to get materials to craft with. Let’s use an Axe, for example. Once you’ve done that, you can chop wood from trees, and then you can use the wood to build a Spade. This allows you to plant trees, mine ore from rocks which, in turn, enables further crafting possibilities. None of this is “new” per say, it’s just a new way of doing old things, and it’s just different enough to make the early days with New Horizons feel like it’s not just “the same thing again”. DIY recipes are learned in all manner of ways: some are just bought from the shop, others are given by island friends, some cost Nook Miles – but there’s always something to build towards. The Nook Miles system gives the game more direction in the early stages, with Tom Nook easing anyone new to the series down a path that is fun, but crucially, teaches the basics. Eventually Nook Miles Plus is introduced, offering literal mini-events you can aim for like “chop 5 wood” or “catch a dab” that give you smaller, but no less important, Nook Miles rewards.

Long-term fans will want answers to a few questions, but I won’t be spoiling anything here. Though it’s worth pointing out the first week with the game will (as usual) be slow, especially if you don’t have friends to play with. There’s even a chance the random-islands you can visit using Nook Miles might be slightly underwhelming after the first few goes, but Animal Crossing is about rhythm as much as anything, and you’ll settle into you ways and find your own soothing adventures to enjoy.

But the co-op may well be the star of the show in Animal Crossing: New Horizons. Although you can’t visit other islands with local friends, the manner in which you play together is simple yet highly effective. Anyone who isn’t the “main player” only has minimum control over their character. You can’t bring up your inventory, nor use the tool-wheel (which you don’t start with, by the way). Instead you are a helper, and whenever you drift too far, you’re warped back to the main player. So how is that the star? Well, due to the nature of the Switch’s profile switching, you can literally shake the controller to offer “leader” status to your co-op buddies. Since the non-leader can’t pick up things, this means trading is a synch. It means parents and families can play together in a beautifully elegant way, and that there’s rarely any awkward switching between players: it just works so well.

As a long-term fan of the series, it’s difficult to find fault in Animal Crossing: New Horizons. Everything you’d want to be here, seems to be. I refused to time-skip for the review, because that’s not how I play. And that’s the thing, isn’t it? Many games will ask of you things you don’t want to do, but Animal Crossing allows you to play at your pace. It’s here for you, it’s nice to you, it demands nothing you don’t want to offer. Every time you think you’ve seen all it has to offer, it will surprise you with something new to dedicate hours toward, distracting you from the very important task of flower arranging, filling out the museum, picking up weeds, and making sure your house is “just so”, in order to receive an S rank from the Happy Home Academy (a task that’s much easier with the new 3D house arrangement tools).

There will be complaints that it’s still too slow. There will probably even be some that wish Nintendo would alter the game and stop it being a “daily” game that has upper limits to what can be achieved in a single day, but to do so would be to ruin what makes it so special. Indeed, I found myself less focussed on getting the biggest house and paying my loans in New Horizons, instead preferring to make the island a better place for all of us, creating bridges to cross rivers, or making steps to the higher ground. I’ve alluded to it already, but Animal Crossing: New Horizons is exactly what the doctor ordered. I had fears going in. I worried that my wife, someone who doesn’t play a lot, wouldn’t like it because it required a controller and she played her hundreds of hours on 3DS last time with touch controls. Those of us who love this medium perhap take for granted that handing someone a controller is like asking them to suddenly speak a foreign language. But she didn’t; she loves New Horizons. I even cheekily caught myself wondering if this could be a gateway into different worlds for her.

I worried my children, both of who were youngsters when New Leaf came out seven to eight years ago, both of whom are teenagers now, would have no interest. Yet it was my son who spent three hours while I was out building all the things we needed to complete a project. It was my eldest who, upon seeing us all playing together, cooperatively chopping trees and catching fish, decided he too wanted to rejoin the world of Animal Crossing. It’s hard not to share these personal stories with you because that is what Animal Crossing is, and has always been to me. It’s sharing spreadsheets about turnip prices and what fruit you can share with your pals to make their island a better place. It’s a pure, undiluted saccharine sweet taste of friendship that brings us all together and allows us to escape to an island where an anthropomorphic pig calls us Lambchop every time we speak to her, and a duck called Scoot constantly wants use to go for runs with him.

I won’t apologise for sentimentality in a world that is ever increasingly moving towards anonymity and the cold. If you are looking forward to Animal Crossing: New Horizons as a long term fan, know that this is everything you could have hoped for, which is to say it’s more Animal Crossing with quality of life improvements on what might be the best console Nintendo’s ever put out. It’ll sell millions, earn new fans, and top play counts for years to come. Knowing my family will be playing this together for a long, long time, makes me feel like everything is going to be alright, and goodness, what more could you ask for?

The random islands can be disappointing

A beautiful, welcoming game that is everything and anything you want it to be. This is one you'll play all year and beyond, and it's exactly what the world needs right now.