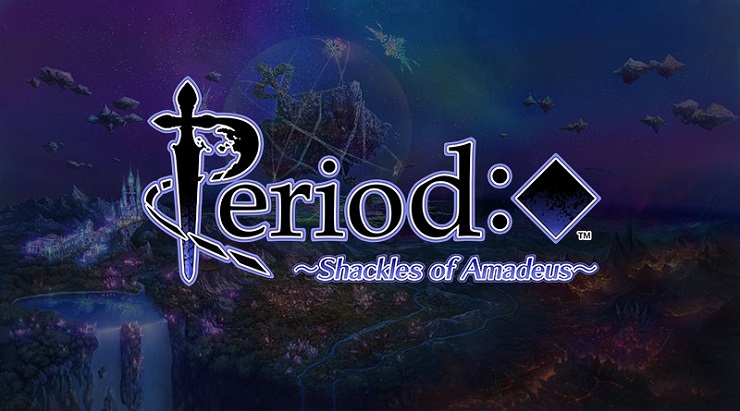 The visual novel genre in gaming is a niche one, but the otome variety of visual novels is even more niche in the West. Otome games usually cater to a female audience and Aksys has been at the forefront of this genre on consoles for a while. Period: Cube – Shackles of Amadeus is the latest Otome title to be released by Aksys and it is an interesting beast. While it did not impress me as much as Code: Realize, I did enjoy most of my time spent with it.

You play as a normal high school student named Kazuha Hanamiya (name can be changed). She meets her childhood friend Hiroya on the way to school one day and he asks her about her brother. Her brother Shiki hasn’t been in contact with her for some time and both of them decide to investigate his apartment. This leads to Kazuha getting involved in an MMO called Arcadia. One problem I had, is how dumb the developers think the player is. Basic terms like login and server are explained as if the person playing a niche game on a niche handheld has no idea about online games. It felt pretty condescending. Arcadia has multiple servers covering all the letters of the alphabet but V. The V world server is different. If you join World V, dying in game will cause you to die outside as well. You basically get sucked into the MMO literally and need to find a way to escape. There are multiple branching paths with different endings for each of the main story love interests. There’s a lot of cheese in the story and while some routes are fun, others were pretty tedious. I did however enjoy the character development for almost every route. Radius’, Hiraya’s, and Zain’s routes were highlights outside of the main true route. As with every visual novel, I recommend playing it without a guide for the first route or two while experimenting yourself to see which ending you get. After that, you can safely use a guide to unlock the other endings or see what you need to get the true end.

This is a visual novel so the bulk of the gameplay is reading through loads of dialogue and pressing X or tapping the dialogue window to progress. The MMO aspect allowed for some interesting choice mechanics and a gauge system that decides the ending you get. Once you’re locked into a particular route, you can get a good or merry bad ending. This changes based on affection and almighty level. Both of these are affected by the choices you make. There are situations in which you attack, use a defensive move, or try and escape a battle. These battles are well inserted into the narrative even though they are only few and far in between for each route. There’s a flowchart system that lets you skip ahead to a particular point and try and see the other ending to each route as well, which is always a welcome addition in visual novels. When Aksys announced this localisation, I was impressed by the art in the screenshots.The developers have really done a great job with character portraits, animations, and environments. The only downside in the visual department is the monster design. It feels lazy. The use of colours and subtle animations in environments is commendable. The scenes that have clouds in the sky even have the clouds animated in an elegant manner. I also really liked the interface style. Overall it feels very polished. Voice acting is in Japanese only so don’t expect an English dub going in. It is very well done though. The music however is excellent. It does teeter on the repetitive side sometimes. The opening video is fantastic and is a sign of how good the music for the rest of the game will be.

While the characters are almost all great and I liked the visuals and music a lot, the story isn’t as good. I wish there was more to it because while the premise is derivative, the story fails to explain some things. The focus on a select few characters for romance most definitely helped in making each route feel memorable. Period Cube is an easy recommendation for Otome fans even though there are some better stories in the genre on the Vita.

Some routes are boring

Period Cube is a good otome visual novel with great visuals, interesting characters, and nice music but one with a derivative and cheesy story that let it down.