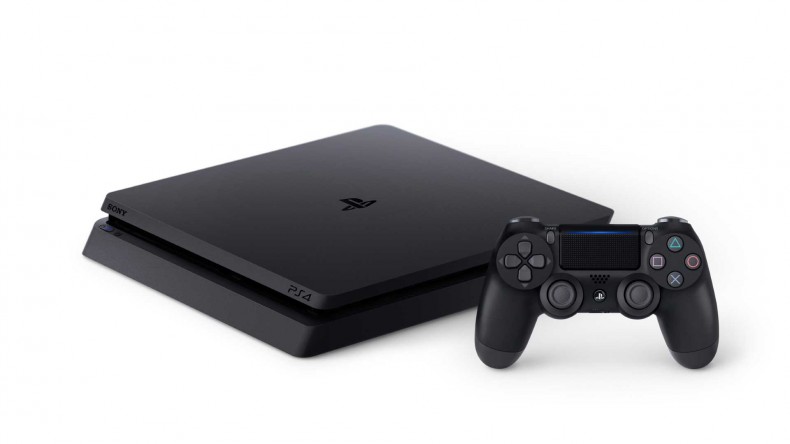 Writing about the PS4 slim is a hard thing to do – mostly because it’s difficult to know who I’m actually doing it for. It’s hard to imagine there’s anyone out there yet who is thinking of buying a PS4 but has yet to do so, but just in case: this is the model you buy – unless you want 4K, then maybe wait, since you’ve waited long enough already. See what I mean?

So perhaps, then, the people looking to buy the new Slim model are in fact people who have issues with the original console, or just want to spend money on a new aesthetic. On that note, I rather like how the Slim looks and feels. While side by side comparisons to the original PS4 reveal it to be smaller-but-not-massively-smaller, what you can’t see in photos is how much less it weighs. I don’t know how they’ve crammed it all into the smaller chassis, but I can tell you without fear of being wrong that it feels significantly lighter to hold.

But you’re not buying a PS4 to carry it around like a watch, right? No, you’re buying the PS4 Slim because it’s incredibly quiet. I’ve made no secret of the fact the PS4 I used beforehand was like an aircraft taking off: Uncharted 4 made me worried it was genuinely going to catch fire and burn my house down. Maybe that was because it was a pre-launch unit we had for review, or maybe I just have bad luck. I’ve spoken to lots of people (on staff, and outside of the industry) who have varying tales, but more people than not reported back to me that their PS4 gets loud. It’s a silly complaint, I guess, because nowadays we’re all wearing elite headsets that block our families out and allow us to sit in our pants playing video games, right? But regardless, the Slim model is ridiculously quiet. In fact, I can’t hear it operating at all, aside the disc drive. Normally it would be audible right away, and when I boot a game, it’d put the fear of God in me. But the Slim eliminates all of that.

Now look, I can’t go into the future, and after a year’s use and all the dust in the world clogging up the fans, maybe it’ll be louder, but right now it’s on par (if not quieter than) my original Xbox One – and that thing is whisper quiet. I haven’t gotten a decibel meter out, but I’ve got good hearing and I’m sitting right in front of the thing, and I’m here to tell you that without a disc in the tray, it’s near silent. If you can’t stand the simple noise of a disc spinning, then you should probably give up playing games, but know that you can hear the disc spinning. That’s actually a new thing to me, since my old PS4 was so loud I couldn’t even hear the smoke alarm going off (this may be a slight exaggeration).

Elsewhere, the form factor is actually nice, as are the “real” buttons for powering it on or off, and ejecting a disc. The two USB ports being separated is weird, though I suspect it may have something to do with PSVR, and will mean the “always cabled” feature that the VR breakout box brings to your PS4 will be less annoying as one of the ports is right on the corner at the front. The hard drive is easy to remove, now, with a simple pull at the plastic revealing it in a similar way to the Xbox 360 slim revisions. Removing one screen will then allow you to slide out the hard drive caddy, and from there it’s plain sailing.

The DualShock4 has been updated somewhat, too. I have all manner of PS4 controllers here (red ones, white ones, some as big as your head – not really) and I can’t feel much of a discernible difference on the buttons or thumb sticks. The only major change is that there’s now a slim light bar on the actual touchpad itself, which means you can see what colour it is when holding it. It’s not obtrusive in any way, and is probably there to allow you to immediately identify which controller belongs to who after a break.

The one real negative, then, is the lack of optical audio out. It’s likely most people won’t care, but I have a headset I’m particularly fond of that I can’t really use any more. I also have an audio receiver that is wired up with optical cables. I can, however, accept that it’s a sign of the times, and less people are using it (presumably), but the omission is a shame on an otherwise stellar revision of the base level PlayStation 4.

Ultimately, that’s what this is: a hardware revision. I could ramble on for another hundred words, but the PS4 Slim’s killer feature (for me) is how quiet it is, and there’s not way I’m going back to having to compete with a 747 taking off when I’m trying to play PES. For now, this is the best PS4 you can buy (unless you want optical audio).

No optical output
Comes with a 500GB hard drive

It's a PS4, then, but slimmer. The lack of optical out is a shame, but it's very quiet while on and has a nicer, lighter form factor. Until the Pro comes out, this is the ultimate PS4.