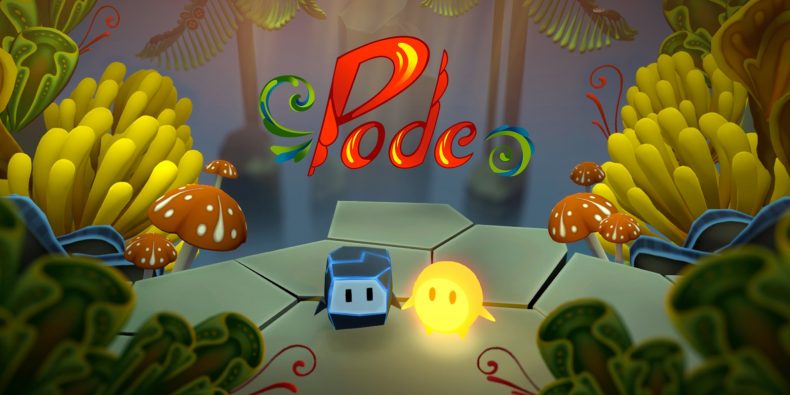 Sometimes games are just…nice. Stripped of danger, combat and elements designed to get your blood pumping, they can provide a nice escape from your troubles and tribulations, and this is what this beautiful indie game from Henchman and Goon does, mostly.

Pode is the story of a star who falls to earth, desperate to get back into the sky it teams up with a happy-go-lucky boulder and they set out together to climb a mountain so the star can be back where it belongs. To do this the couple must solve a series of puzzle rooms where their innate abilities allow the locations to grow and take form. Crystalline rock formations sprout from the ground, great flowers erupt from buds, platforms flip up, all with a squeeze of the right trigger with the dependant character near its trigger point. Obviously both the star and boulder have different abilities, the star is light and as a result can walk on water or float in air updrafts, this is the one who can make the plants bloom as well. The boulder, however, can duck through certain tunnels, carry objects (or even the star) in its mouth and can walk around under any water. There’s a limited move set here but they can be used together in various ways, such as having the boulder carry the star in its mouth and then having the star ‘shine’ to create a focused beam of light. There are other things as well, but to lay them out here risks spoiling their appearance for the player, but I will say that the final unlocked mechanic comes way too late and not enough is done with it before the game finally reaches its conclusion.

There’s a singular hub here with several offshooting ‘districts’ formed of puzzle rooms, with a grand puzzle at the end of each one. The actual rooms themselves are easy, all you have to do is figure out how the two character’s abilities go together so that both star and boulder can reach the exit and move on to the next room. There’s practically zero challenge in them, and no threat at all, which makes doing them a nice, calming experience. Where Pode falls down though is in the final grand puzzle rooms for each district, especially the first four which obfuscate their hints within murals that aren’t obvious or are hard to see, and upon figuring them out I didn’t feel smart, I just felt a tad miffed.

It obviously helps to play Pode with two players, so that both people can work together and bounce ideas off of each other, in fact if I had been playing this with someone else I probably would have had considerably less frustration because when two people play the experimentation increases, when alone you’re obviously going to do one thing at a time which slows down the process. Let me lay it out for you, on your own you switch between the two characters by pressing X, or you can link their movements together by holding the left trigger (which if they’re close enough makes star and boulder hold hands). Doing this alone can make it so that you don’t try certain things, such as riding all the way to the top of the pillar in the first district’s final puzzle room. So frustrating were these rooms for me that I had to go off and do other things and leave the beautiful world of Pode alone for a while. The thing is, once you’re past those first four districts the whole thing just flows and the path to the end is really quite simple. That’s a shame, but it’s a thing mitigated by playing with a friend, and all things considered, Henchman and Goon could have opted to ditch the single player altogether, but they didn’t, and that’s a good thing.

Pode is a lovely, sweet calming experience, and it’s so nice watching the rooms blossom into life as you move around – although when the amount of flora becomes too much the frame rate can stutter horrendously – and while no words are uttered the game tells a sweet, charming story about helping others and friendship. Pode is ok as a solo experience, but it’s truly special when you play with someone else.

Lovely to look at
Not too challenging

While Pode can be frustrating in it’s lack of communication it is a rather beautiful thing when experienced with others.