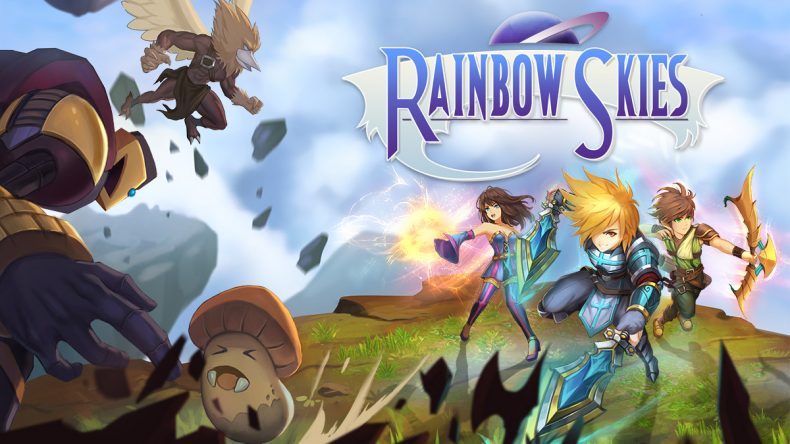 If you played eastasiasoft’s Rainbow Moon, you’ll know more or less what to expect when you dive into the sequel. It’s bright, colourful, like that one co-worker who smiles all the time and is friendly to your face while quietly plotting your death behind your back. On the surface it’s a kids’ game, one dressed up in pretty graphics and twee sound effects; but this is a facade. Rainbow Skies is, at times, a mean-spirited grind-fest that will test your patience in and out of battle.

That sounds really negative right off the bat, especially as I loved Rainbow Moon so much I played it twice, but the truth is I was struggling with difficulty and having to grind for XP and Skill Stones within the first two hours, which just seemed like bad pacing to me.

The plot follows Damion and his friend Layne, monster slayers-in-training, who end up magically bound to the apprentice mage, Ashly, when they tumble from their realm in the sky to the world below. Initially setting out with only their freedom as motivation, the three eventually become friends and find themselves responsible for the fate of the world. As a means to ferry you from one encounter to another, it’s passable, but while the story seems more involved than Rainbow Moon’s (having more than one protagonist helps), it’s not particularly new. The writing is an uneven hodge-podge of out-of-place slang, grandiose posturing and uncomfortable flirting, and there’s an awful lot of dialogue to read. So much so that I reached a point around four hours in and began to abuse the “Skip Dialogue” option so much that I may have missed a few story beats. There are so many moments where the dialogue is laboured and awkward in service of an unfunny joke, or worse, padding, that it becomes incredibly tiring after a while.

Luckily, it’s not all talking, and exploring the world will take up the bulk of your time. It’s mostly open, bar locked gates that can be opened with the relevant key or item, and enemies litter the landscape waiting to jump you if you get to close (unless you get them first, of course). Combat is a large part of Rainbow Skies, and it’s somewhat hit and miss at times. As with Rainbow Moon, you’ll move your characters around a grid-based arena, attempting to flank your enemy, or move within range of a melee or special attack. The main issue is that the damage numbers don’t seem to change much regardless of which attack you choose. Taking pains to manoeuvre yourself to use a special ability is often pointless, as a simple thwack with your base weapon is often just as powerful. Meanwhile, bastard-hard difficulty spikes abound, with enemies often dealing in excess of double your damage. S curatives are hard to come by in the early game and you won’t have much space to carry them, such difficulty spikes (should you survive them) often necessitate a long slog back to the nearest healer to pay for regeneration.

Ironically, toward the mid-game the difficulty skews the other way when you learn how to tame enemies to fight for you. Once this happens you’ll barely want to use your protagonists, because the tamed enemies are way, way more powerful. It’s irritating and imbalanced, and an issue you can only really overcome if you’re happy to grind the hell out of everything to level up your characters. Progression is handled well, though, as you’ll level up in the traditional way by earning XP, but can only increase your stats with Skill Stones, little artefacts that drop from enemies during and after battles. These are used to boost HP, Strength, Luck, etc, while special books allow you to learn new moves and attacks. Armour is all changeable, and actually alters your appearance with each piece equipped, which might seem a bit “so what? It’s 2018”, but is a big deal for an Eastern RPG because they don’t usually focus on the cosmetic.

Given how much I enjoyed Rainbow Moon I was expecting to love the sequel, but instead found the experience to be decidedly okay. It’s pretty enough, but the irritating sound effects and uneven pacing and difficulty mar the adventure. It is saved somewhat by the progression system, the wealth of gear and weapons, and the fact that it’s still just as lovably compelling to explore this world, but it’s far too reliant on the grind and that Skip Dialogue option to be more than a distraction best enjoyed in small chunks.

A disappointing sequel that fails to recapture the magic of its predecessor.