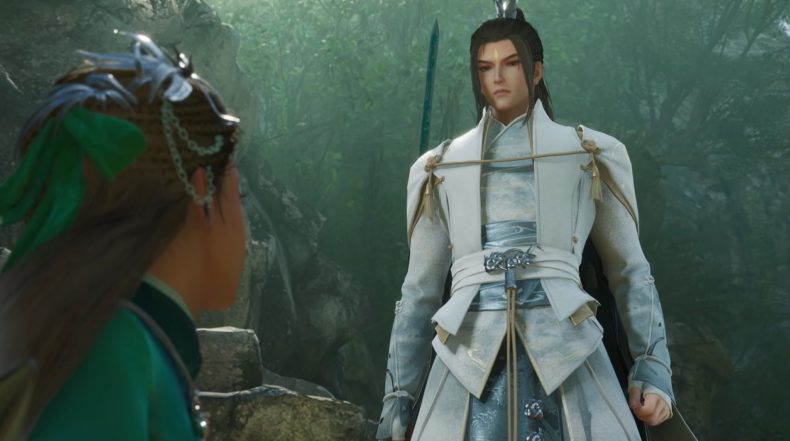 It doesn’t happen very often, but it’s always a weird feeling when you’re playing a game and you find out it’s the seventh installment in an established series. It turns out my knowledge of Chinese action RPGs is lacking though, and until now I had no idea that the Sword and Fairy series had been pumping games since 1995. The latest game in the series Sword and Fairy: Together Forever is out now on PlayStation consoles, so I decided to see what all the fuss was about.

Our hero and main protagonist Yue Qingshu is a young warrior who’s just trying to do right by her community. Helping out in the market and fending off nasty demons is all in a day’s work for Yue, but when an actual deity is flung into the human world and into her village, she’s in for a bit of a wake up call.

There’s plenty of story to chomp down on in Sword and Fairy, so strap yourself in for some lengthy cutscenes involving a child possessed by a god, arguments among religious sects and discussions on deadly demons. The story is absolutely the central focus of this game, so don’t come in expecting all action all the time. 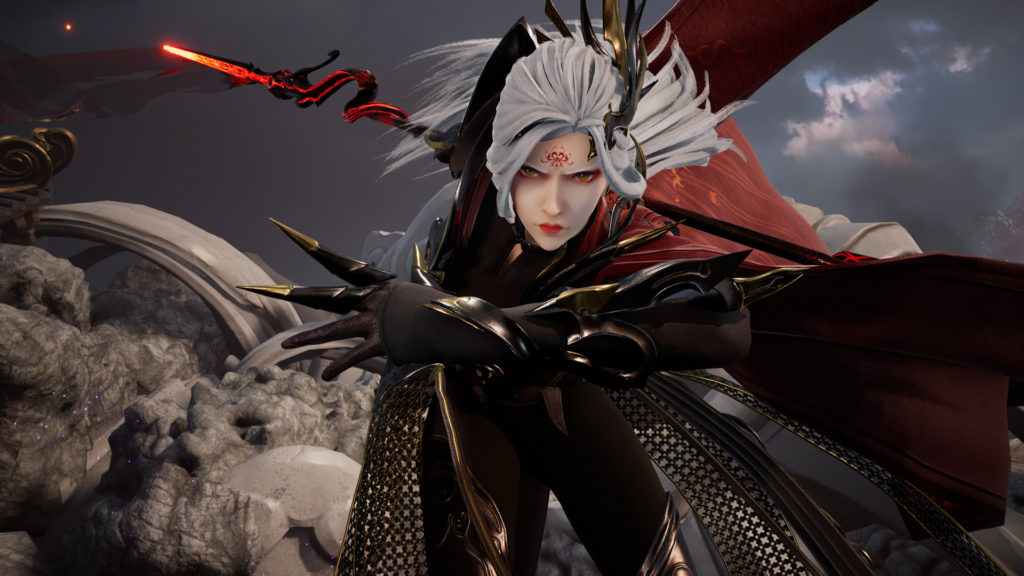 When the action does kick off though it’s fun enough. You can control any one of your party members at any time, and fight off demons in some fairly traditional action game combat. You have different combos and special moves to unleash, and will unlock plenty more flashy attacks as you progress through the game.

Combos work similarly to those in Musou games, with most strings of moves following the “Square Square Square Triangle” framework. Your special attacks are really where it’s at though, and are assigned to different face buttons when you hold down R1. Yue can send her faithful bird companion into enemies from a distance, or heal to begin with, whereas her deity companion has a bunch of godly sword combos at his disposal. Gathering up enough MP to unleash them is always worthwhile

Unfortunately the combat does have some issues though. Enemies rarely telegraph their attacks, and it won’t take you long to get frustrated at how hard dodging is because of this. The whole experience of slashing enemies just feels a bit wishy washy too, with attacks lacking the weighty and satisfying feel of the best action games on the market. 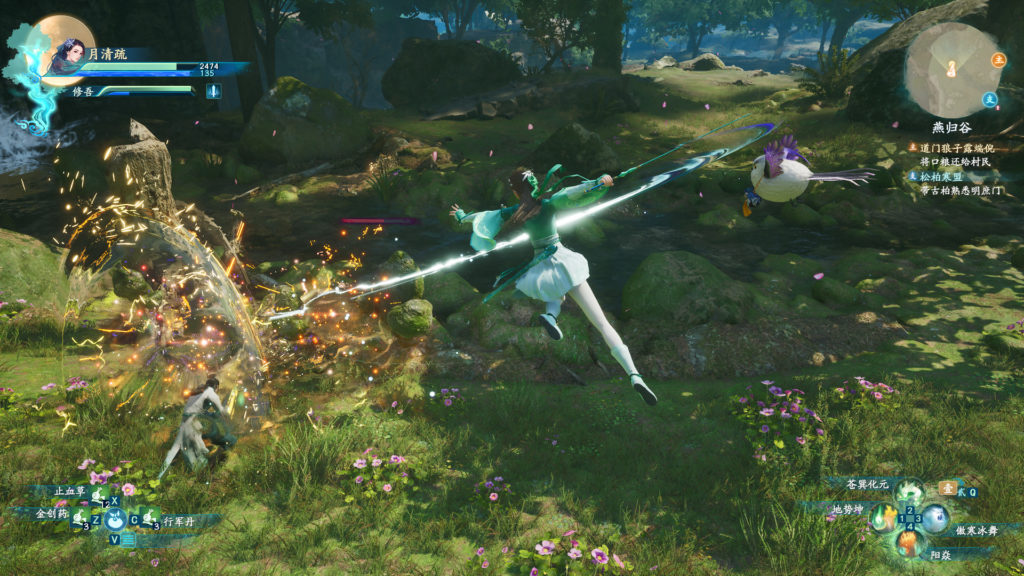 Between fights, you’ll be given all manner of side quests from the villages and towns you visit. These range from finding missing items to battering baddies, and to be quite honest aren’t particularly inspired.

Fetch quests in general seem to be the name of the game in Sword and Fairy, and in early areas you’ll spend hours walking from a village to a shrine, watching a cutscene, walking back, watching a cutscene over and over. When coupled with the surprisingly long loading times between each of these events, it becomes a real slog to progress.

It might sound like I really didn’t enjoy this game, but Sword and Fairy: Together Forever does have its moments. Once you have a full party all four members of it will fight alongside you in combat, and watching these weapon wielding badasses all performing flashy combos at once is pretty magical. It may not be the most engaging combat alone, but when everyone’s involved it certainly has its moments. 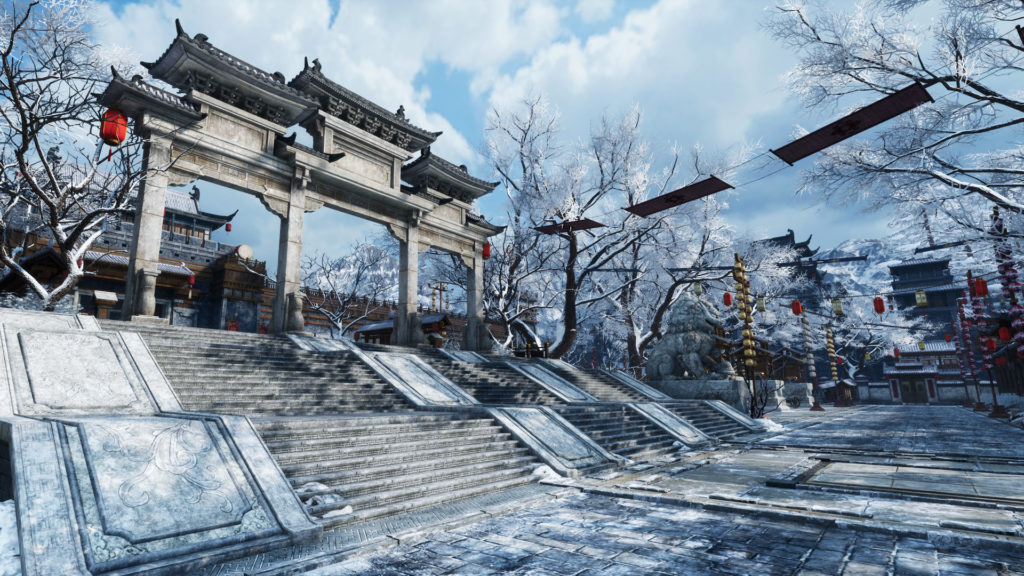 I should also mention how lovely Sword and Fairy: Together Forever looks. The characters and environments are simply stunning, and wandering around a temple or forest is made all the more enjoyable by the visual delights you can feast on. There is a fair amount of pop in though, which might put some off.

I also need to talk about the translation, which is beyond terrible. There were multiple moments in the story where I had no idea what was happening, because often sentences simply don’t make sense. Sometimes it’s sort of amusing, but mostly it just makes it hard to enjoy the already tiresome cutscenes.

Sword and Fairy: Together Forever is something of a mixed bag. It looks great and the combat is often entertaining, but the constant barrage of cutscenes and fetch quests just gets overwhelming. Some will find the enjoyment in Sword and Fairy, but you’d have to be forgiving of a hell of a lot of issues.

Combat is fun with a full party
Looks stunning

Sword and Fairy: Together Forever looks pretty and has some fun moments, but constant cutscenes and a poor translation make it hard to recommend.