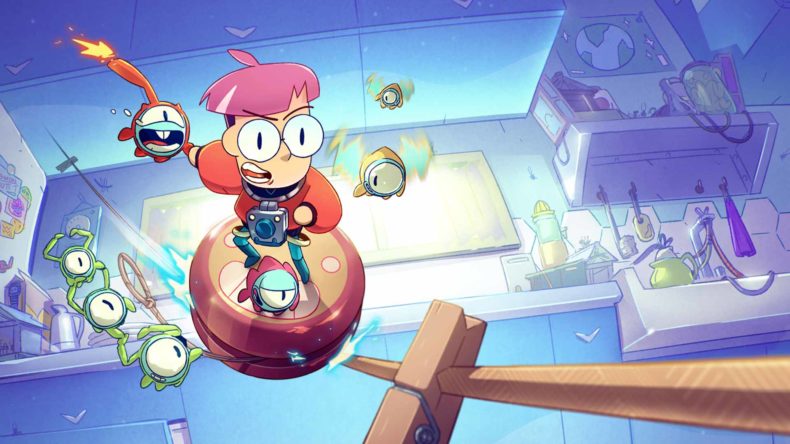 Most years in modern gaming there aren’t a ton of 3D platformers for fans of the genre to enjoy. Long gone are the days of the Nintendo 64 pumping out more mascot platformers than any one human could play, and those who grew up in that era have been left with a hole in their heart. Well, at least until 2022. With big titles like Kirby and the Forgotten Land and indies like Hell Pie keeping the platforming alive, it’s been a heck of a year for those of us who love collecting shiny things. The hits keep coming too, with Tinykin joining the party.

When our spaceman hero Milo arrives on Earth to discover he’s the size of an ant, he’s a bit worried about his mission. Fortunately he’s arrived in the house of Ardwin, a famed inventor who the bugs inhabiting his house all worship. If Milo can help gather six items from around the house, then the bugs seem to think he’ll be able to grow to human size by combining them as shown in Ardwin’s blueprints. But this won’t be easy for an astronaut smaller than a pea. 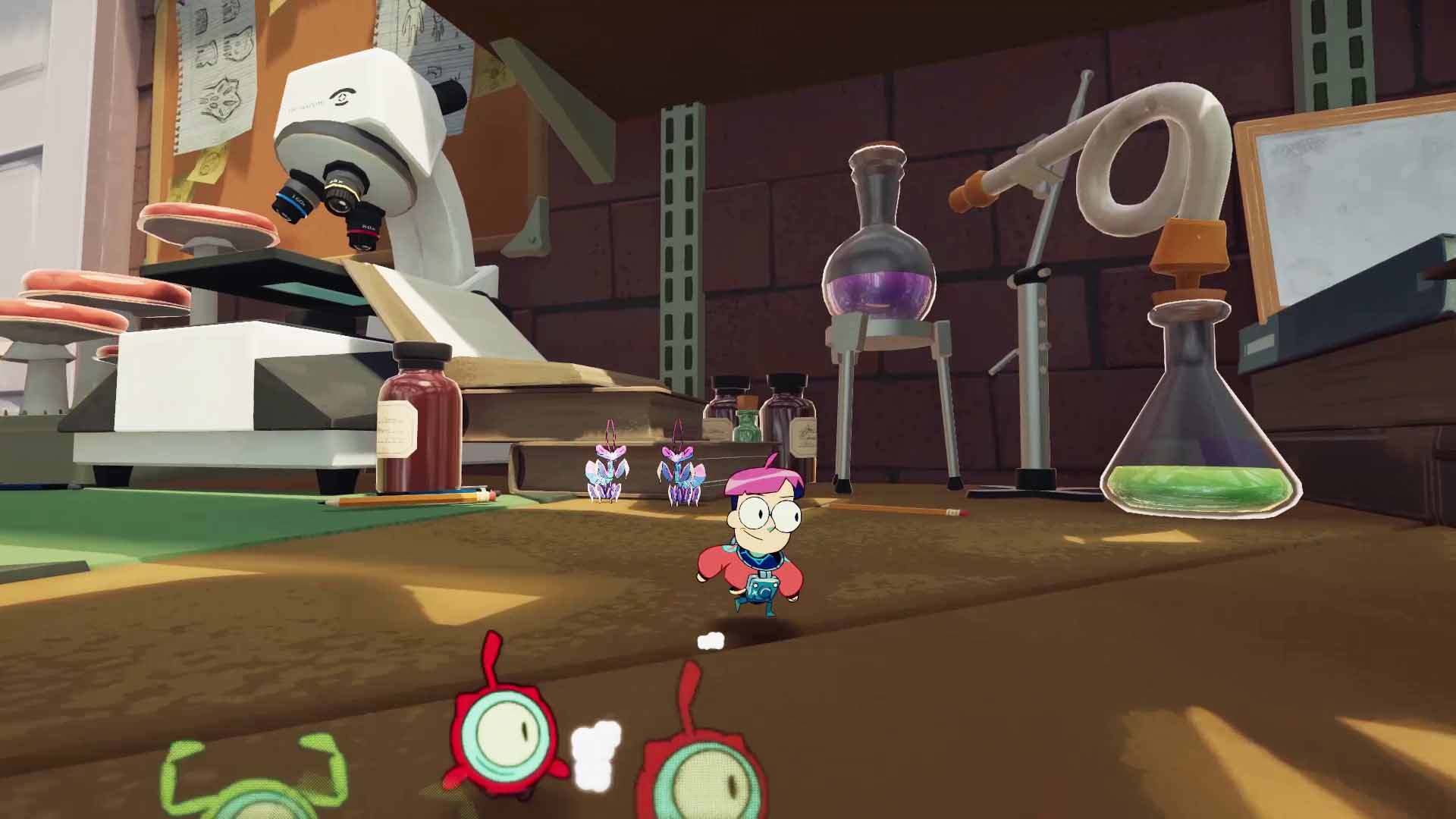 That’s where the Tinykin come in. These little critters for some reason follow you everywhere once you free them from their eggs, and have all sorts of powers. You’ll first find the pink coloured Tinykin who can carry objects for you (which is pretty essential when gathering scientific doodads) then you’ll find red Tinykin who can be launched at blockades and cages to destroy them. The best are green ones though, who you can stack into a ladder and climb to reach new heights.

Using these new friends to accomplish your goals is incredibly easy. You aim them with the left trigger and chuck them with the right, or you can just hold the right trigger to do their thing in context sensitive areas. If you find a item that can be carried, but means nothing to you, it doesn’t matter. The miniature pink cuties will just start marching it wherever it needs to go, no questions asked. I really appreciated how helpful the Tinykin were, without ever feeling like they needed managing.

The powers of these little guys will help you explore each room and find everything you need to progress. There’s always a main objective in each room, but there are also plenty of other reasons to delve into every crevice. Collecting enough Nectar will power up Milo’s bubble jump (which allows him to float after jumping) and do this enough and he’ll practically be able to fly. There are also artefacts you’ll be given for helping bugs with their problems, which a friendly ant would really appreciate you gathering for his museum. 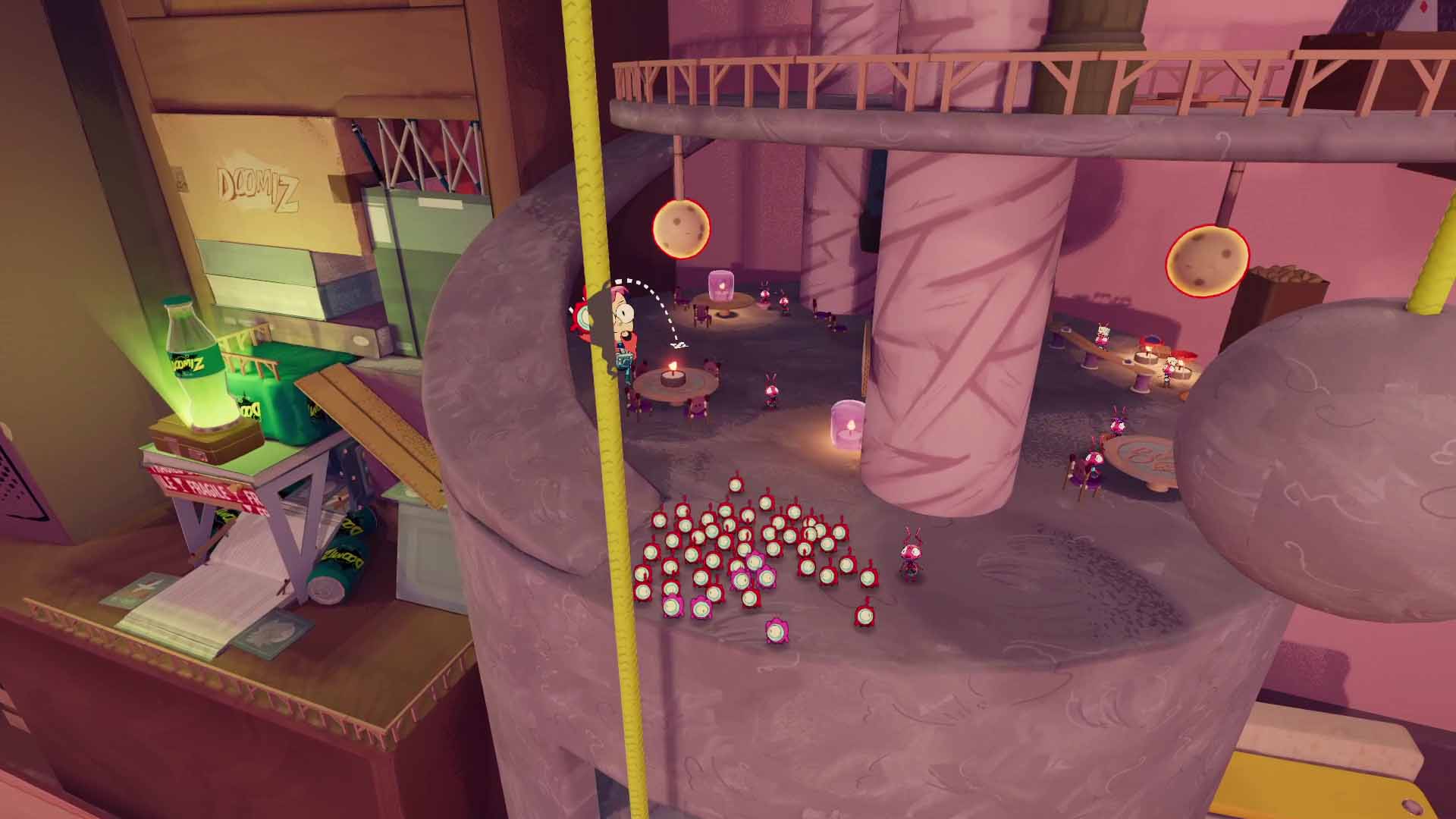 Perhaps the most impressive aspect of Tinykin is how it never feels overwhelming when you’re presented with one of its sprawling stages. A standard living room or kitchen should feel impossible to scour for nectar when you’re as small as Milo, but because the layout is so relatable it’s easy to structure your exploring and remember where you’ve already searched. Maybe you’ll climb up the armchair first, then move over to the house plant. And don’t forget to check the cupboard under the telly.

As well as not feeling overwhelming, it’s also the least intimidating 3D platformer I’ve ever played thanks to a distinct lack of enemies and hazards. Tinykin is all about that exploration, so dealing with baddies and dodging fireballs just isn’t on the menu. You can technically die by falling in water or falling from a great height, but there isn’t a focus on twitchy platforming at all. Instead you can just leisurely make your way to the top of the fridge and collect some sweet nectar.

I simply can’t give enough praise to the environments of Tinykin. Each room of the house is completely different and absolutely magical, from the living room housing a massive cathedral of shieldbugs to the kitchen which has grassy plains made out of scourers. The house manages to be both completely ordinary and wondrous at the same time thanks to the whimsical antics of the bugs that inhabit it. 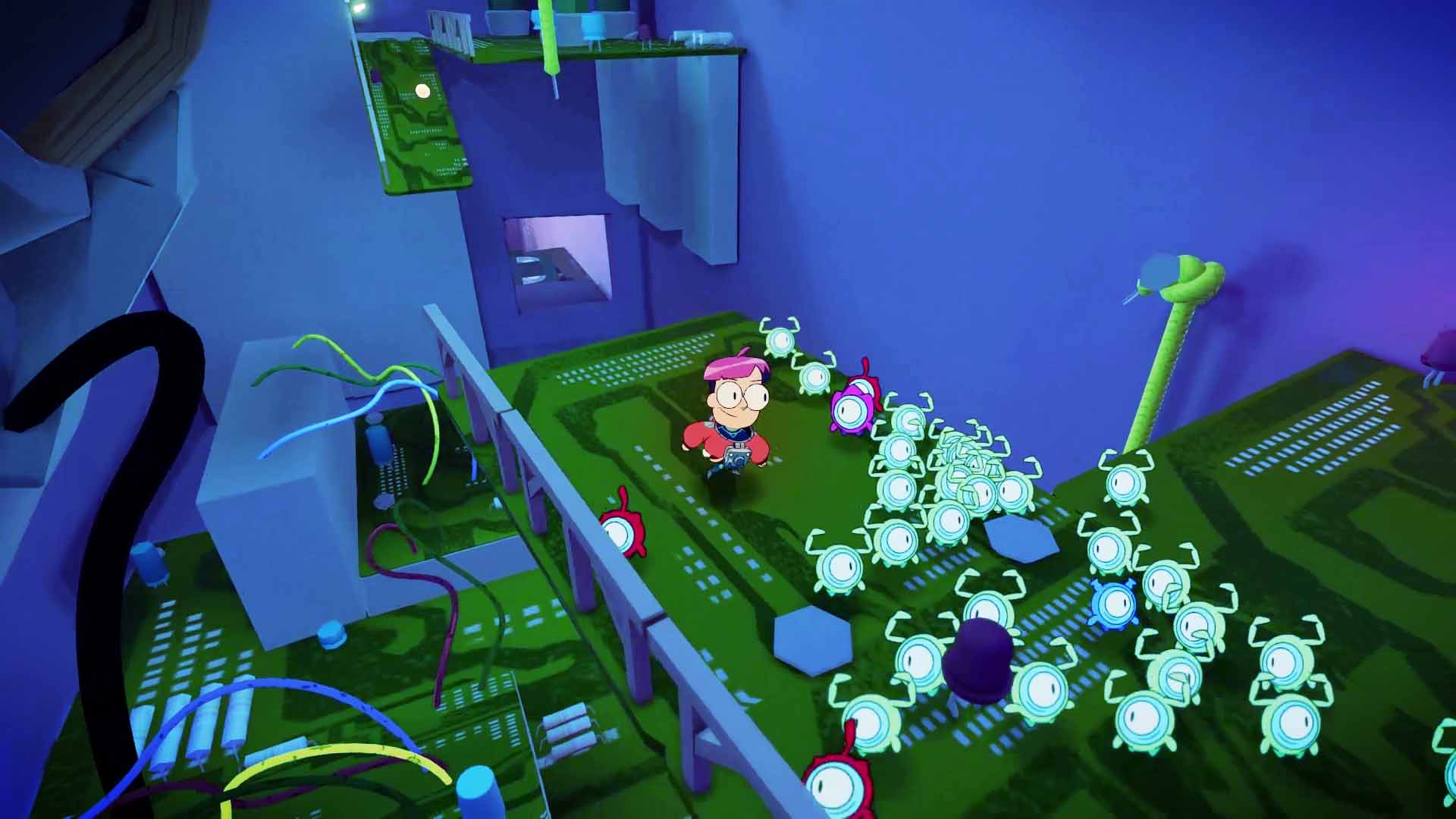 Exploring each level is made even more enjoyable thanks to your “skateboard”. By hopping on a tiny bar of soap, Milo can whizz around each stage at top speed. This is really helpful when you’ve remembered something you need to collect on the other side of the room, and is incredibly fun to use. You can even grind on sharp edges and silkworm threads, which are handily available all over the house to enable you to access places you’ve already been with ease.

I should also mention the lovely art style. The levels and objects of Tinykin are the typical colourful 3D models we all know and love, but the character models are 2d. The combination of styles work really well together, and add some extra charm to the insects you meet. Milo and the Tinykin are definitely my favourite though, especially when you leave them idle and they all just fall asleep in a big heap.

It didn’t take me long to gorge on everything Tinykin had to offer, especially because to collect everything in every level took me about 7 hours. It might be over a little too soon for some, but I rather appreciated that it didn’t outstay its welcome. It’s rare for a game to leave me wanting more, but this one managed it in a good way. 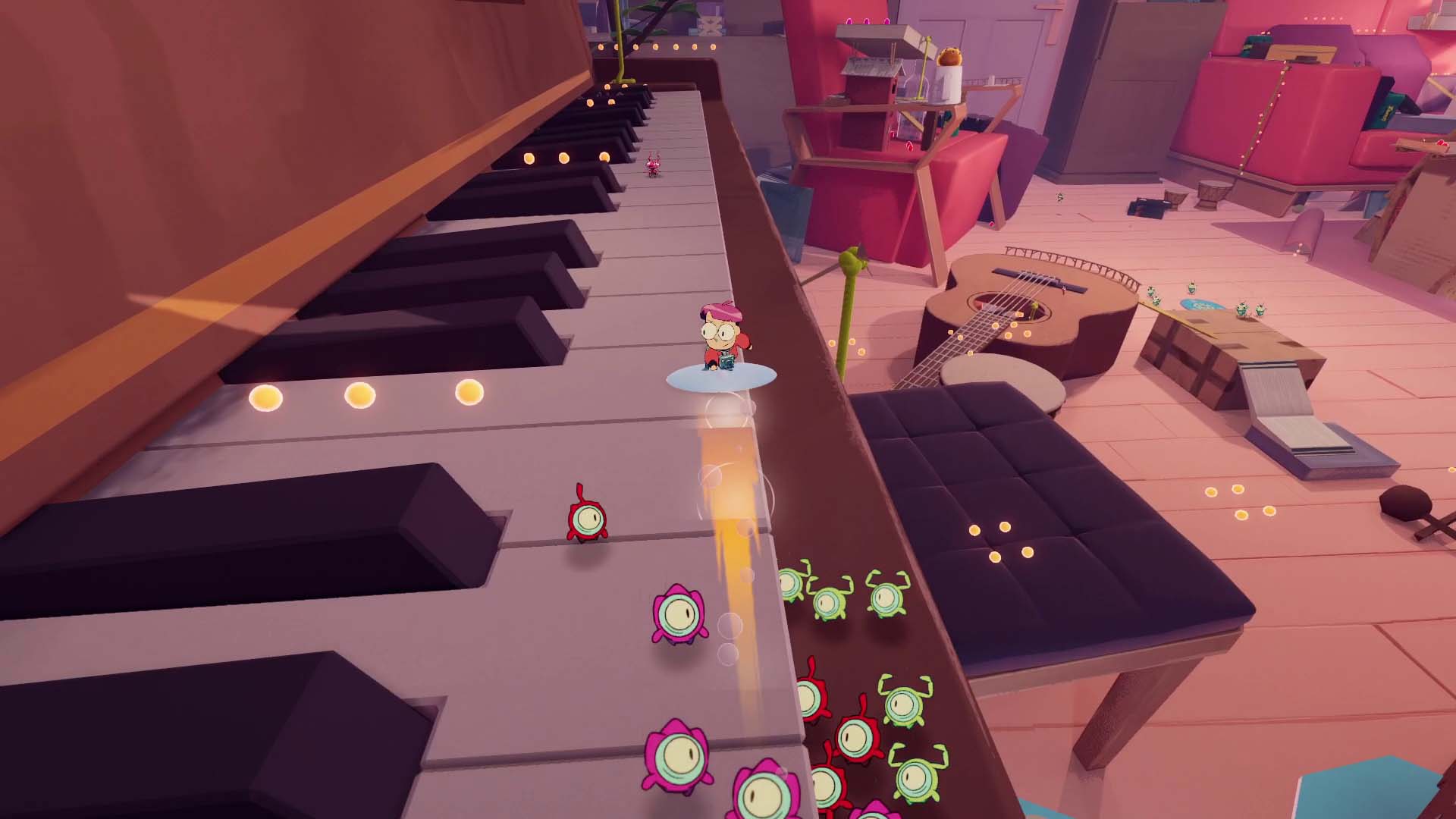 Although I loved my time with Tinykin, it does have a few tiny issues. The last two types of Tinykin you find can be used to conduct electricity and build bridges, and I think they have the dullest powers of the bunch. There are also times where you’ll get a bit annoyed at how slowly your little critters carry items for you. Usually you can just leave them to it and explore elsewhere, but when there’s nothing left to do waiting for them to slowly drag a bag of flour up a ramp made out of a ruler can be a bit tiresome.

Tinykin is a fantastic exploration-focused 3D platformer, with charming characters and delightful environments. The creatures themselves are a great addition to the game too, combining Pikmin with platforming to create something truly special. If you’re in a bit of a gaming rut and need some joy in your life, there’s no game I’d recommend more than Tinykin to cure what ails you.

Tinykin is a joyous and unthreatening exploration based 3D platformer, with a ridiculous amount of charm.