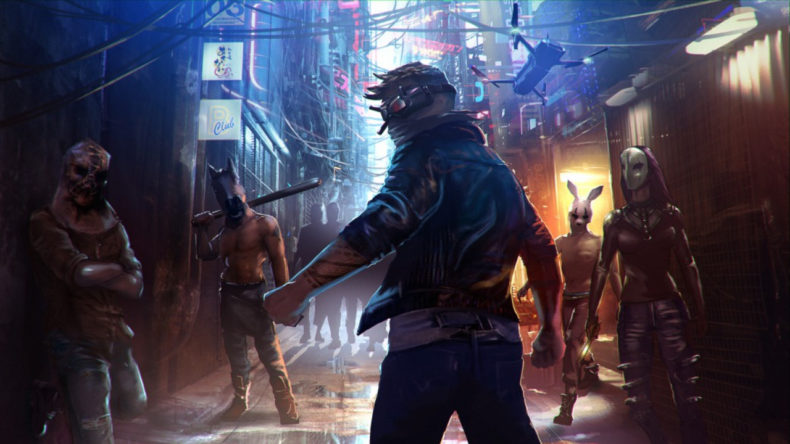 Sometimes you’ve just got to hand it to the indie dev. Unfettered by the chains of publisher pressure, often with no past legacy to apply the weight of expectation, they are simply more able and more willing to take risks to achieve an artistic vision. Sometimes that means taking a concept as simple as Midnight Fight Express, and absolutely ramming it full of as many ideas and gameplay elements as will possibly fit without completely bursting the seams.

This “have-your-cake-and-eat-it” approach to development won’t work for everyone. In fact it’s failed more than once, but in Midnight Fight Express it not only works, but does so with fairly spectacular results. The premise is like a hybrid of John Wick and Hotline Miami, with a little Sifu thrown in. Although this is the game Sifu might have been had it not taken itself quite so seriously. Throughout MFE there’s a sense that you should be having fun first. 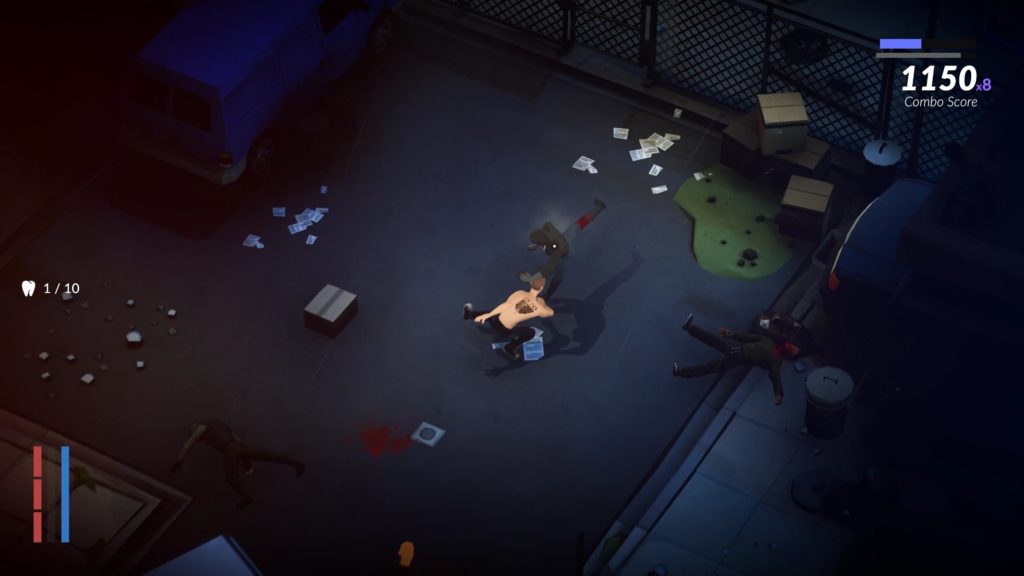 Midnight Fight Express tells the story of Babyface, an amnesiac enforcer now targeted by his former employer, a brutal, unforgiving crime lord. A living legend on the streets, Babyface is guided by a mysterious figure operating a drone that accompanies him everywhere. Each level is presented as a flashback as Babyface is interrogated by a couple of loose-cannon cops on the trail of his former boss.

Driven to fight for both survival and absolution, Babyface is an almost mythological entity, whispered about by nervous thugs and criminals in a manner belied by his unassuming, unremarkable features. He’s led by the unreliable whims of the drone-pilot, who tosses out morsels of truth among great big mouthfuls of bullshit. Often, it’s Babyface’s enemies who seem to be telling the truth, creating an intriguing gangland mystery that harks of Devolver Digital at their best.

Completing each of the 40 diverse, isometric levels opens up challenges that give you a reason to replay them. From specific side objectives to achieving an S-Rank, these challenges place you in a global leaderboard and reward you with new cosmetic skins, clothing, and items to spawn in the Playground Mode. 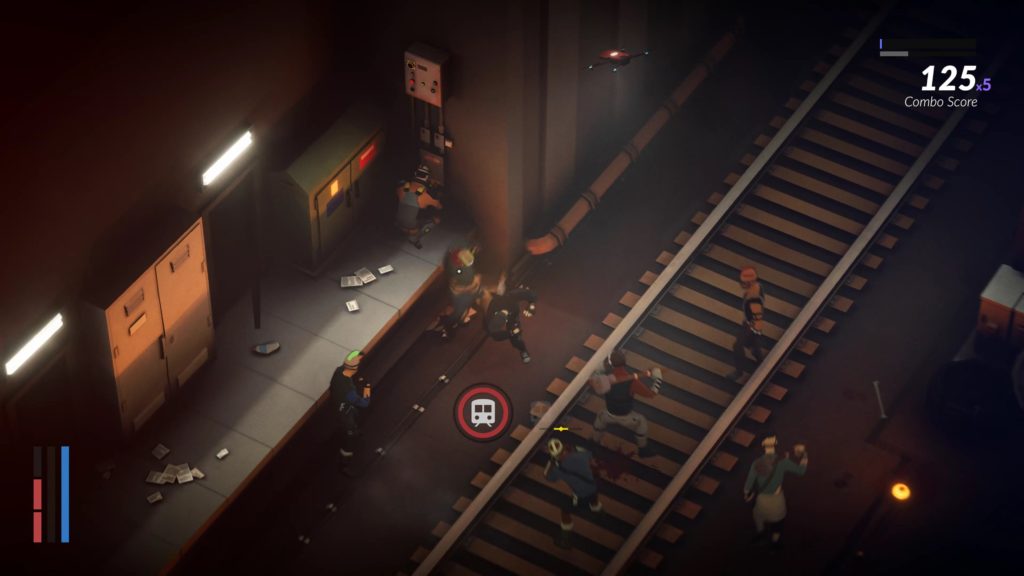 After you complete each mission the first time, you’ll receive a skill point to unlock another of Babyface’s latent talents. Separated across a handful of skill trees, these include a suite of disarming moves, grapples, and finishers that gradually turn each encounter into an Arkham-style mix of combos and reactionary takedowns. There are contextual finishers, sidearm finishers, and a whole host of brutal kill-moves that make each fight feel satisfying and cathartic.

Unfortunately though, Midnight Fight Express compensates for Babyface’s growing battle prowess by cramming more and more into each encounter. A sudden low-point was trying to fight a biker gang full of damage-sponge heavy enemies while several used automatic weapons and one drove a motorcycle directly into me over and over again. A motorcycle which also occasionally exploded, killing me instantly.

In fact the second half of the game throws a few too many enemies with guns at you, which disrupts the flow of combat too much as you’re constantly getting shot while mid-combo. The idea is to take out the gunmen first, of course, but when there are two or three at once it really hurts the otherwise slick pace of each encounter. 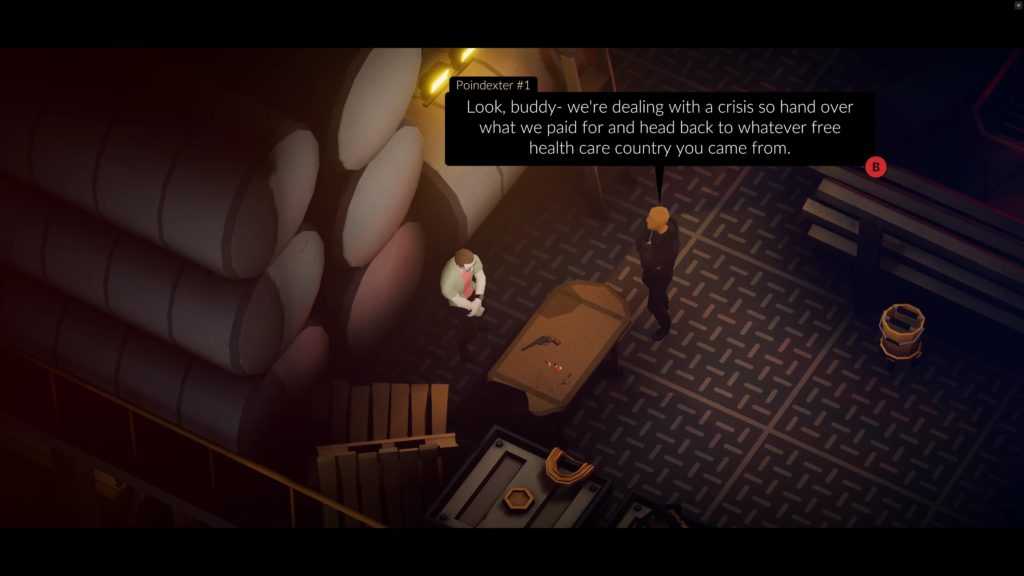 However, when MFE is flowing right, it’s one of the best melee action games I’ve played. Weapons can be picked up and swung or thrown, guns emptied and discarded, chairs, rubbish bags, briefcases, and bottles can be kicked or tossed at enemies. You can stick cleavers in heads, spear divers with their own harpoons, and take on huge circus freaks with lethal claws.

Almost every level introduces new enemies with new mechanics. It becomes a little much after a while, but also stops the game becoming boring. You’re always having to adapt to the situation, altering your tactics and weaponry on the fly. Between each level you can boost your skills, alter your outfit or skin, or muck around in the Playground Mode. This is a practice mode that allows you to spawn multiple weapons and enemies to practice dealing with any situation the game throws at you.

The simple, blocky art style allows for some colourful locales and interesting enemy designs. Levels are stuffed with tiny details, hidden NPCs, and secret weapons that often become part of challenges on repeat runs of a level. Bosses are a little samey, though, not offering much of a step-up from standard enemies. They have bigger health pools and special moves, but they die the same.

Midnight Fight Express is a fantastic game when you’re in the swing of things. Made primarily by just one man, Jacob Dzwinel, it’s a triumph of variety and cathartic violence. The Hotline Miami comparison is not one lightly levelled: everything from the dialogue to the incredible soundtrack evokes that same sense of effortlessly cool brutality. One very impressive touch lets you capture short GIFs from a level run to share on social feeds.

Jacob Dzwinel’s game is in danger of having just a little bit too much game in it. It feels churlish to complain about getting too much content, though you may get more from it if you play it in short blasts. Addictive gameplay challenges, modifiable difficulty settings, and an absolute smorgasbord of enemies, tactics, game mechanics and locations make Midnight Fight Express a superb indie brawler that rewards repeated play.

Combat is slick and cathartic
Excellent soundtrack
Tons of replayability