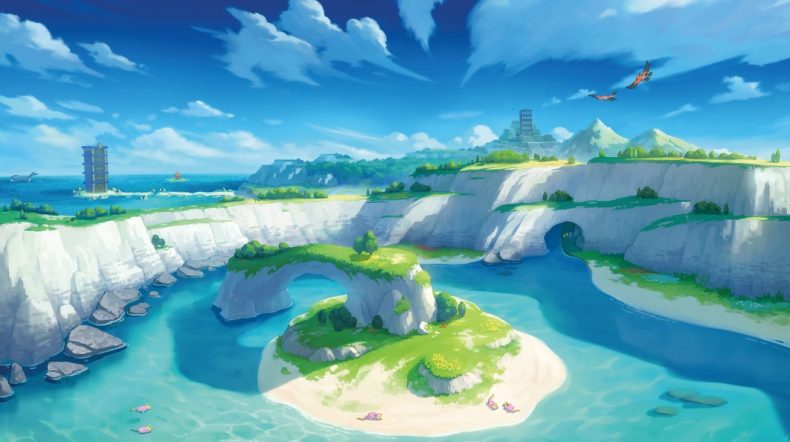 It had its share of critics, but it’s fair to say that I really enjoyed my time in the Galar region. 17 odd million other fans agreed – the charming if flawed Switch RPG has shifted nearly twice the number of units as its Let’s Go predecessor. The 8th Generation Switch debut sowed the seed of what a fully functional, living and breathing MMO-style Pokémon world could look like, and the first of its downloadable add-ons builds upon this rather nicely, offering a winsome combination of nostalgia, excitement and surprises along the way.

British Pokémon trainers will have no difficulty figuring out that The Isle of Armor is loosely based upon our own motorcycle and tail-free moggy loving Crown Dependency. And whilst that beautiful isle has its fair share of diverse wildlife, it isn’t a patch on Armor, which is one big old fully Wild Area chunk of terrain, absolutely stuffed full of Pokémon, including a large number of returning faves controversially omitted during “Dexit”. It is a real thrill seeing classic monsters of yore, and their Gigantamax forms mingling with the newer additions, but even better in that they seem intrinsically connected to, and interact more with their biomes in a manner we have never seen before in a Game Freak joint. The unpredictability of the Galarian Wild Area weather is gone, and there are clear distinctions between the caves, the archipelagos, the deserts, the forests and swamps. Being an island surrounded by the ocean, there are plenty of Water type creatures to encounter, including O.G starter Squirtle, water fairy Marill, and the super aggro, unfortunately-named Sharpedo. As well as attempting to complete the new expanded Pokedex, there is a brand new, martial arts themed Legendary Pokémon to meet for the first time, a Dojo and two Challenge Towers. Looked after by the delicious sounding couple Mustard & Honey, the Dojo serves up some fairly innocuous missions to complete for a reward. Depending on which version you own, there is another short character-driven story accompaniment, where you take on a new rival in the form of Psychic type specialist Avery, and Poison expert, Klara. The new faces you encounter are well fleshed out and amusingly written and animated, and genuinely set the Isle apart from the Galarian mainland. None of the story shenanigans offers much of a challenge; it has to be said, but then the real focus of this DLC is exploring an all-new environmentally eclectic Pokémon habitat, and the thrill of discovery, whether those captures are new finds or old classics. There is also one piece of side-action that makes excellent use of an Alolan Diglett’s barnet, which I enjoyed immensely.

As long as you have your trusty Rotom Bike, you can access the entirety of the Isle of Armor immediately. Exploring is made even more fun by the fact that for the first time since the Heartgold/Silver titles, or indeed Pokémon GO, you can be accompanied in the field by a lovingly animated buddy. This huge new ecosystem is available to any player that has unlocked the Wild Area in their main game. From the off, all you have to do is head over to Wedgehurst Station, and you can be whisked away to your island retreat in mere seconds. Be warned, however, that despite the new Rivals having relatively weak line-ups that can be defeated with ease, some of the other battles, raids and bosses will be extremely difficult for those who have not aced the main game. There is even one mission where you are required to level up a Pokémon to a specific level, which will involve grinding for those who haven’t progressed far enough. As a result it feels a little unbalanced.

As an expansion, Isle of Armor tries its best to improve on the existing Sword/Shield experience, with the inclusion of some genuinely useful delights, such as an NPC that can reset the EVs of a Pokémon. There is the amusing looking, equally amusingly named Cram-O-Matic that helps combine and fashion items, a bunch of new moves and outfits to experiment with, and recipes for stuff like Max Soup, which will allow you to see the aforementioned Gigantamax versions of your Gen 1 favourites. There is no getting away from the fact that the core dens/raiding system and grindsome nature of the source material, as well as some of the graphical challenges, do remain, but as a glimpse of the future and what Pokémon may eventually become, getting lost in the gorgeous islands comes with my ringing endorsement.

Isle of Armor won't convince naysayers to try Pokemon Sword and Shield for the first time, but offers fans some lovely new content and bags of charm.