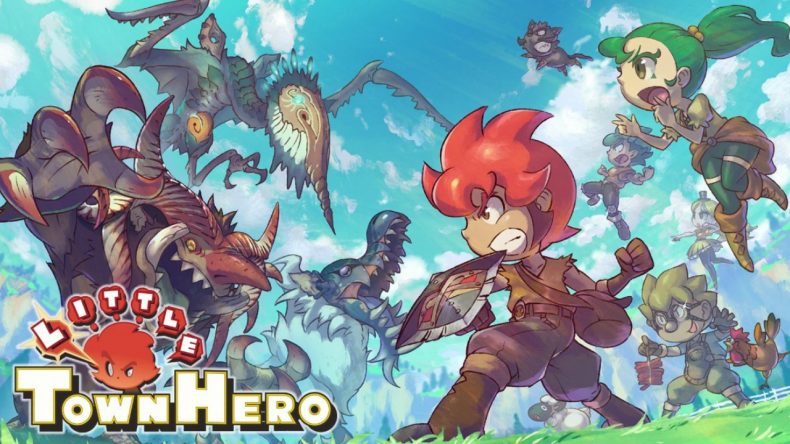 What is the collective noun for a group of emotions? It’s a question I’ve been mulling over these past few days. A wash of emotions, a confusion perhaps? After careful consideration, I think the best I can come up with is brainfart; a brainfart of emotions. The reason for this odd deliberation is thanks to Little Town Hero, a game that has had me on an emotional rollercoaster during my time with it. Unfortunately that’s not the compliment it may seem to be. As well as feelings of joy, contentment and adrenaline, there were tinges of boredom, frustration and even exasperation.

The brick-to-forehead title sets the scene reasonably well. You are Axe, a newly-discovered young hero from a very little town, a village in fact. Monsters suddenly appear in your peaceful neighbourhood, and it’s up to you to stop them. And if you could figure out why the lives of you and everyone around you have been thrown into mortal danger and stop it, that would be great too. The story beats through this tale will feel quite familiar and a little predictable at times. Having said that, there are some unexpected twists later on, giving it a fresher feel than your average RPG yarn. What you begin to realise though, is that Little Town Hero’s title isn’t just describing our protagonist. It also frames the scope of the experience as well. All the happenings occur in the same village, a far cry from the usual sprawling adventure across an entire world. Naturally this adds more than a smidgen of repetition to proceedings. However, it also makes you feel a part of a community as your escapades and interactions affect the same people. Your relationships with them change and grow alongside your experience of the game. You care about this town, and when a monster puts it in danger, you’re more passionate about overcoming it.

How you do that, is the game’s unique mechanic – its combat system. Rather than relying on skill or reflexes, these require more tactical thought and consideration. Events unfold like a mix of turn-based tactical RPGs and, weirdly, trading card games like Magic: The Gathering. Furthermore, each encounter is one-on-one between you and a single monster. Each exchange is split into turns where your opponent has revealed attacks coming your way. Your job is to try and out-manoeuvre them as best you can. Your attacks start out as simple ideas, or Izzits, and can only be used when their power cost is paid. Once done, they become Dazzits that can be used at any point. You need to choose a Dazzit response to every enemy attack. Each attack has a strength and defense value, and if your Dazzit strength value is equal or greater than the enemy’s defence value (or vice versa) the attacks are broken and disappear. Attacks that aren’t broken have their defence reduced by the opposing strength, making them weaker for your next turn. If you manage to break all the enemy’s attacks in a single turn, you get a bonus point. Alternatively, if you still have an attack Dazzit to use, you have a unique opportunity. You can use it to damage the monster, and get a step closer to victory.

Sound confusing? Yeah, well that’s because it is until you play a few rounds and get a feel for how it works. There’s a good tutorial to give you an introduction to the basics in some simple battles. There’s also the option to revisit them at any point should you need a refresher. And that might just be the case, as Little Town Hero also doesn’t shy away from introducing additional layers of mechanics to consider during a fight. For example, at the end of each turn against a monster, you run around your location a randomly agreed distance, and the monster follows you. If you’re lucky, your new spot could be occupied by a villager or usable item that can help turn the tide for you this turn. There’s definitely plenty to consider, but the pacing of newly-introduced ideas means you never quite feel out of your depth.

One of my biggest annoyances was the use of RNG. Your starting Izzits each turn are randomly selected from your pool of ideas. Also, the order of a monster’s attacks is random, meaning sometimes having to change up your strategy on the fly. Your movement each turn around town is also unpredictable, which makes it harder to secure the bonuses you might need. Sometimes everything slots into place, other times it feels like everything is against you. This is the difference between a fight lasting ten minutes or half an hour, or worse, in failure. For example, there was one boss, where on Turn 23 (yes, really!)  I was within one move of winning, and I lost my last heart. I restarted, and on a second try, bested the same foe by Turn 9. All down to luck, I certainly hadn’t become a better player in mere moments. Now it’s true that such random elements do keep each monster battle fresh, forcing you to think about each situation. And there is nothing better than finally securing victory, because you know you and your brain earned it. However the flipside is that sometimes you feel so utterly helpless in the options open to you. Sometimes it can feel like you’re just going through the motions, which is when the game lets you down and the frustration kicks in.

There are some noticeable framerate issues, mainly at any point where there’s a transition of any kind. It mainly occurs as you begin a cutscene, or any other loading situation. There were a couple of occasions where I genuinely thought the game had crashed, although thankfully it never did. The next cutscene would always appear eventually, much to my relief. Thankfully this tends to only affect the story, and the meat and potatoes of the combat is largely unaffected. The turn-based action is presumably not too busy for the Switch to handle.

But there are moments when this game is sublime. The music, frankly, is gorgeous. It’s a glorious mix of rousing battle themes and softer, charming melodies when you’re out exploring. The latter are a perfect accompaniment to the idyllic, almost rural setting you’re in. It serves to reinforce the need to preserve your home by keeping all manner of monsters at bay. There’s also nice touches, like a purposeful slowdown in the battle music as you select your attack to deal physical damage to your enemy. Almost like the game is holding its breath for what is about to happen. The visual aesthetic oozes charm too, with it’s bright and vibrant colours emphasizing your natural surroundings. The simple, almost cel-shaded style of the visuals allows the Switch to cope without the burden of over-detailed realism. And to be honest that style is much better suited here. It parallels the simple life of the villagers around you and Axe himself. As well as a story of saving the village, this is also about Axe growing into a young man. He discovers more about his past and also what awaits him in his future. But often not because he’s destined to be a great hero, but because we all learn and mature and grow up. In fact watching him and his friends navigate social situations in between heroics is just as endearing as saving the day.

There’s certainly a lot to like in Little Town Hero. There’s an interesting town to explore, full of character and life. And it’s perfectly complemented by its audio and visual design choices. And laying the final blow on a monster after an epic thirty minute fight will always result in a mini fistbump. Your overall enjoyment ultimately comes down to whether you can overlook some of the frustrations. If you can take the randomness with a pinch of salt, and dust yourself off after a potentially blameless failure, then you’re halfway there. And if you can keep track of the mechanics, and overlook the transitional framerate drops, then you’ll find yourself having a really good time. It’s something a little bit different, and that often comes with risk. But overall it’s a package I’d recommend sticking with, despite the hiccups along the way.

Little Town Hero is a slice of something different. It rewards tactical, considered play in a lovely charming village setting. If you can overlook the randomness of battles, there's a lot to like here.