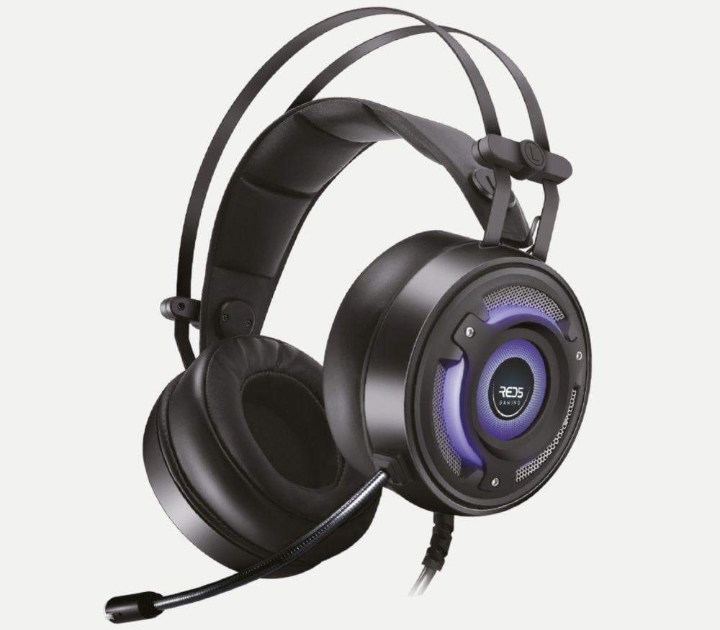 When I’m shopping for a new headset, comfort is usually king. I go for comfort first, then sound quality, then pretty much everything else. While they’re all nice selling points, I find that things like RGB lighting, detachable mics, and in-line controls are gravy. One thing I’ve never gone out of my way to find in a headset is vibration, and having spent some time with the Nova from Red5, I’m not likely to change my stance on that any time soon.

First things first, the Nova is a budget headset. You’ll find it for around £25 from retailers like Lost Universe, and I have to say that for a relatively cheap unit it performs pretty well. I played mostly PC games, watched some YouTube, chatted with my long-suffering squad on Fortnite, and I can’t really complain about the quality. I did find them a little bit bass-y at times, but that might not be solely down to the headset.

Compared to models found further along the budget spectrum they do feel a little brittle, and the plastic finish has an inexpensive feel – but again, these are not a premium build and for £25 you’d be hard-pushed to come up with a valid complaint. I and found the padded headband to sit just a little too high on my head which gave the headset a comical look and I wouldn’t feel comfortable using it on stream – although they are fairly comfortable thanks to the cushioned pads. The cups are big and bold, equipped with RGB lighting that you can switch off or adjust with the in-line controls.

They connect with a standard USB cable, meaning you can use them with PC or consoles, which is ideal in my house where there are four pairs of ears that all want headsets while gaming. There are a few features that would have made it a little more attractive such as a detachable mic. Again, this is really just gravy, but being able to take the mic off when I don’t want to talk is preferable, especially as there’s no way to even stow the mic on the Nova.

But the big talking point for this headset is the vibration feature, which I’ve got to say I’m not a big fan of. I don’t even like excessive rumble in my controller, so having it vibrate my ears is no great benefit to me. And I don’t feel it immerses you in the game much more; if anything it reminds you regularly that you’re wearing a headset. It’s not as vigorous as a pad rumble, of course, and for certain effects like explosions I can see the appeal, but it’s not something I can see me every spending time shopping around for.

Overall the Red5 Nova is a solid headset for the price. A little RGB goes a long way and the rumble feature, while kind of superfluous, is an interesting touch. I do worry sometimes that budget models sacrifice some build quality in order to include bells and whistles like RGB, etc, but the Nova just manages to deliver where it counts.