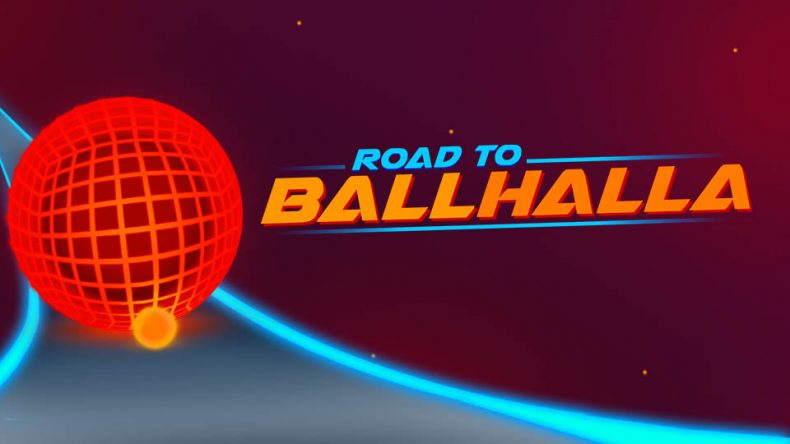 What’s in a name?

Well, some of the memorable ones stay in your head, and create images in your mind about that person. I know a guy called Robin Banks for example, and it’s hard to imagine him without a black mask on, stripy shirt and carrying a big bag of swag. I also assumed Joy Laws, who worked in the legal team where I work, always loved her job, and the less said about Stuart Little, the estate agent me and my wife had when we bought our first house together, the better. Let’s just say we made sure we hid the cheese.

So you can imagine the reaction when I received Road to Ballhalla to review. The audacious pun caused my eyes to roll so much they could very well have been the ball you control in Torched Hill’s puzzler. Released a couple of years ago on Steam, the game now has a console release on PS4, Xbox One and Switch, so it’s a perfect opportunity to dive in and see what it’s all about. On face value, the game feels very familiar. It’s a puzzler of the type that’s been done a hundred times before; control a ball and roll it around a course to the exit. But right from the off you realise that this game is going to be different.

The first thing you’ll notice is this game is pretty bloody pleased with itself, confident and unapologetic in its own humour, as if the choice of name wasn’t proof enough. Little chunks of text appear as you progress through the levels, some helpful, some devious, and some just downright troll you and your mistakes. If you were in any doubt about how this game goes about its business, an instance in the first level – where you’re asked to avoid a laser to progress, and then after a bit of rolling, you literally get destroyed by an unavoidable laser – should put things into perspective about how seriously this game takes things. It’s not afraid to have a joke, normally at the player’s expense, and by and large that’s a good thing. It provides a touch of humour and character to what could otherwise be a pretty dull and tedious setting.

That setting is quite stripped back, with just simple 2D movement, and the use of a boost button to speed up proceedings is all you have to navigate each puzzle. However there are a few mechanics at play which make things more interesting. Firstly your ball has a health meter of 100, that depletes if it accidentally touches red squares, and at 0 you explode and have to restart. More often than not the red squares will flash on and off in time with the game’s music meaning you have to time your rolls to progress. However, if you touch a red square whilst boosting it’s an instant death, so often you have to juggle the use of movement, boost, position of red squares and the beat of the music to overcome the game’s challenges. You’re not timed on the puzzles, so (barring a couple of exceptions) you can go at your own pace, and figure out the best approach and timing to get to the goal. When you do reach the goal you’re rewarded tokens based on your performance in two areas, the percentage of optional collectables you picked up on your way, and also how many times you respawned due to death en route to the finish. Up to four tokens for each can be earned making a total of eight tokens up for grabs for each level. Your running total of tokens is then kept, and you’re required to have earned a certain amount to unlock later levels, giving a purpose to those little collectables and avoiding death.

Speaking of death, it is worth noting, you will die and respawn a lot in this game. It is a game that is difficult, both in what it wants you to do, but also the precision it requires you to have too. Timing is one dynamic, but sometimes movement also needs to be almost pixel perfect to avoid an obstacle, which turns the learning curve in the game into a very steep climb. It may be that the difficulty may put some people off, especially those looking for a more casual puzzling experience, but what is worth pointing out is that the game is incredibly fair. Sure it can hurt when you make a mistake and die, not only putting your potential tokens at risk (a real bug bear for the completionist in me), but to make matters worse often a snide comment could appear on the screen pointing out your error, inducing your inner rage. But, and this is important, if you die, it’s because you made a mistake, sometimes within very narrow margins, but the mistake is still yours, not the game’s. And because of that I found myself pushing myself onward, and finding the reward in those tokens all the sweeter. Luckily, for the game and for your sake, the controls in Road to Ballhalla are very precise, with no input lag or random darting around. The ball is constantly under your control with even a slight touch of the control stick having an impact. The d-pad movement is equally as good and is better used for when puzzles require simple 4-way movement. The trajectory and momentum of the ball feels slick and realistic, making controlling it in tight spots or areas requiring quick reflexes more natural and manageable. The well-designed controls really do re-emphasise that the fault lies with you upon death, but also with you on success, which does make victory all the sweeter.

With just 24 levels to play through there will be some that will bemoan the length of game on offer here, and it is true that you will most likely finish all the levels with two or three evenings of play. However that sells short the total experience that is on offer here. Firstly there’s the collecting of tokens, offering you rewards for replaying levels and beating them in a more accomplished way than perhaps you managed the first time, with tokens also unlocking cosmetic extras such as different coloured balls and boost trails. The game also has a Rush mode which rewards you with stars for beating the level without collectables in a set amount of time, further adding to the replay value. But it is the design of the puzzles and mechanics in each level which really shines through in this game. Because each level is normally split up into a set of mini puzzle sections, it means each of them is long enough to explore a new mechanic in a few different ways. As a result the game isn’t shy to throw a new mechanic at you in each level meaning each one is normally a completely different experience or challenge from the one that went before. On one level you could be having to avoid a ball that periodically falls on your current position like the Wallmaster in the Zelda games, and in another level they completely flip the camera perspective to confuse you with which direction you need to move the control stick to move your ball where you want it to go. It’s a bold statement but it most reminded me of Super Mario Odyssey in the sense of having lots of ideas and mechanics and gameplay experiences all in one game. And it means that the puzzles themselves always feel like a fresh challenge that you want to explore and take on.

Fundamentally, there’s a simple test that will likely indicate whether this game is for you, and it’s back to the game’s name again. If you think the title is a ridiculous, stupid name that isn’t funny and you want to punch the person who came up with it, then chances are this game isn’t for you. Chances are the quirky, trollish humour won’t resonate, and on top of that the difficulty curve will likely be the icing on the cake to stop you persevering with the experience. If, however, like me you rolled your eyes, but maybe had a slight smirk about it (because let’s face it no one is going to be laughing about it), and can overlook it, then chances are you’ll stick with it and enjoy it. You’ll find that resilience paying off during the game’s more difficult sections, but the victory will be all the sweeter for your commitment. And what you’ll find is Road to Ballhalla is a very well designed, aesthetically pleasing, challenging puzzler. It’s packed full of variety that means despite it’s difficulty it keeps your engagement throughout. A puzzler that is well worth looking into, whatever your name is.

If you can take the difficulty on the chin, you'll experience a broad range of top-notch puzzles, that are well-executed and overlaid with a cheeky, playful tone. Rolling a ball around around a level shouldn't be this much fun.