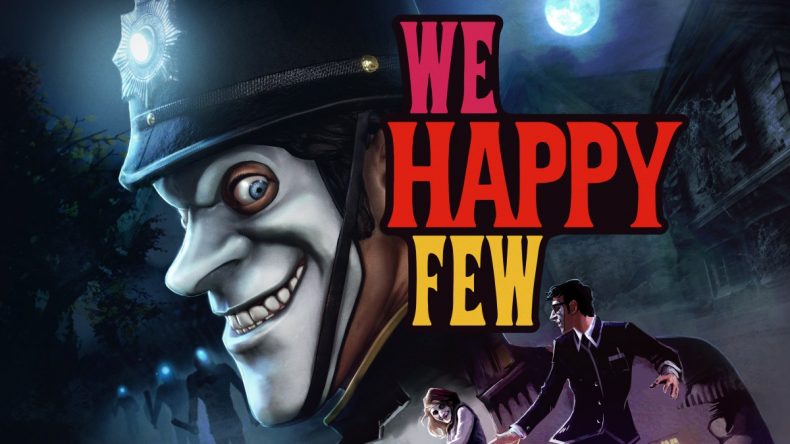 We Happy Few is a strange one. When it was announced that a new team, comprised of those who had worked on Dishonored, Far Cry 3 and even the Half-Life series, were working on something akin to Bioshock, who wouldn’t be excited about that? Excitement levels rose again in 2016 when the game launched on Steam’s Early Access platform, with big Youtubers and streamers jumping right on in.

Thing is, the weird survival sandbox that made up We Happy Few’s Early Access game was not at all what people expected. Perhaps not even what they wanted. It quickly disappeared off the radar, but Compulsion Games didn’t stop there. The full release was announced to be more of a narrative-driven affair, with the Early Access build merely helping to refine the various mechanics of the gameplay ready for launch in August 2018. Now, here we are in August 2018 and We Happy Few is now finished. It is indeed a more narrative-driven game, but the survival mechanics and open world are still a big part of things. First off, you play as Arthur Hastings, a censor for the paper that circulates around Wellington Wells; this is a rather dystopian place in which its inhabitants are kept in check via the drug Joy. This keeps everyone in a constant state of euphoria, even causing them to see things a little differently to the “downers” that refuse to take their Joy and are either cast out or taken away and drugged up against their will.

The story starts off well, with Arthur coming across a story from his past (a memory that Joy has suppressed) that ultimately convinces him to stop taking his medication and see the world for what it is. This is made especially clear during an early scene, in which he attends a party and is asked to whack the colourful pinata on the table, only for it to split open and reveal itself to have been a rat, bludgeoned to death and its insides consumed by the other party guests. Arthur’s sickened reaction outs him as a downer and he’s chased out of town. It’s a fantastic set-up for something that never quite lives up to its promise. When you do find yourself back in Wellington Wells later, forced to take Joy until the effects wear off, you realise that nothing ever really changes. Do something out of character and you might arouse suspicion, but that’s about the extent of it. Let’s talk about Wellington Wells and its surrounding countryside, because the open world is perhaps one of We Happy Few’s biggest flaws. The whole area is a vast expanse of grass and the odd abandoned house, with the odd village of downers dotted around. At first, you’re treated to a scene that teaches us about the importance of appearance; dressing Arthur in his fine suit outside of Wellington Wells will only result in the broken down remnants of society attacking him, which leads us to tearing holes in the suit in order to blend in with the downtrodden. Wear that same suit in the city though, and you’ll soon have the entire population brandishing frying pans and cricket bats, chasing you around the streets. This kind of thing extends to a few quests too, as you’re encouraged to look the part in order to blend in.

The AI doesn’t seem to respond properly to disguises however, as one particular quest showed me. I was to infiltrate an…interesting establishment, in order to steal the documents of some official and thus grant me access to the next part of the story. I attempted to sneak into the place, but was spotted breaking open the window and promptly chased from the premises. After a few minutes of running for my life and then hiding on a bench, calmly lifting my paper to read and conceal my face, I returned to the club and snuck in through the window I’d just opened. Once inside, the problem became clear: nobody patrols or gives you chance to sneak by, instead they sit and stare into the room, making it impossible to get through unseen. I did eventually find a disguise, in the form of a rubber fetish suit because yes, it was that kind of club; this enabled me to get around unnoticed…except that it didn’t. I can only assume this was a bug, because the game clearly wanted me to find the disguise, yet everyone still reacted to me and chased me around the building despite wearing it. At one point, I was forced to sit and read on a chair upstairs, as every single NPC in the building came rushing into the room, eventually giving up the chase and leaving me alone. This sort of thing became a regular occurrence throughout my time with We Happy Few, which is why I came away so frustrated.

I do love the idea of having to blend into each environment, and the addition of Joy should have made Wellington Wells an even more interesting place to visit. If you take Joy, you’ll blend in without a problem, strolling jauntily about the streets and greeting everyone you meet (though I quickly tired of the Dick Van Dyke British accents), plus you can wander through Joy Detector machines without setting the alarms off and being zapped to within an inch of your life. When the drug begins to wear off, you’ll go into withdrawal which will cause anyone nearby to grow suspicious and probably try to beat you about the head with their frying pans again. It’s amazing what these people carrying in their pockets. You can’t just pop a Joy all the time either, because too much will cause memory loss and reduced running/combat abilities. This should have been a fantastic addition that creates real tension and forces you to be strategic, but it simply ends up being an annoyance. Let’s talk about that combat I just mentioned, shall we? When stealth fails (and it will), or the game decides that you need to fight someone for the sake of it, you’ll engage in a spot of fisticuffs. The left trigger (I played using an Xbox One controller) blocks and the right trigger swings your fists or whatever weapon you’re wielding, as long as you have the stamina to do so. Weapons just don’t last long enough, though, and fights tend to end up being nothing more than both parties swinging wildly at one another until one of them is dead or unconscious, meanwhile any other enemies are queuing politely for their turn to pummel you into a coma. Even taking into account throwables like bricks and bottles (mainly used for misdirection, but still handy in a straight fight), it’s just so awkward. If you’re downed, you’ll wake up somewhere nearby later, but all that does is suggest that Compulsion Games knew its combat was poor and decided to go the cop out route instead of actually making it better.

I really wanted to like We Happy Few. I loved its alternate take on a dystopian British setting, and the Joy mechanic had such potential. You also cannot deny that its art direction and general design is gorgeous, but intrigue and pretty visuals just isn’t enough to disguise a game that’s far too big for its own good. Its map is too large for a game that really ought to have been more linear, because after the first few hours the cracks really begin to show; once you’re five or six hours in, you’re ready for it to end, but are forced to sit and play for another four or five hours. It wouldn’t be so bad if you could save anywhere, but you’re forced to find and clear out old underground stations in order to ensure a safe point to wake up when you next load up the game. Even then, you’re not guaranteed to wake up anywhere near where you were. Perhaps given another few months, We Happy Few could have been great, but as it is it’s simply a missed opportunity.

Despite its enormous potential and intriguing beginnings, We Happy Few’s open world is too big and too empty, ultimately distracting from the intriguing plot, which unfortunately never really goes anywhere.