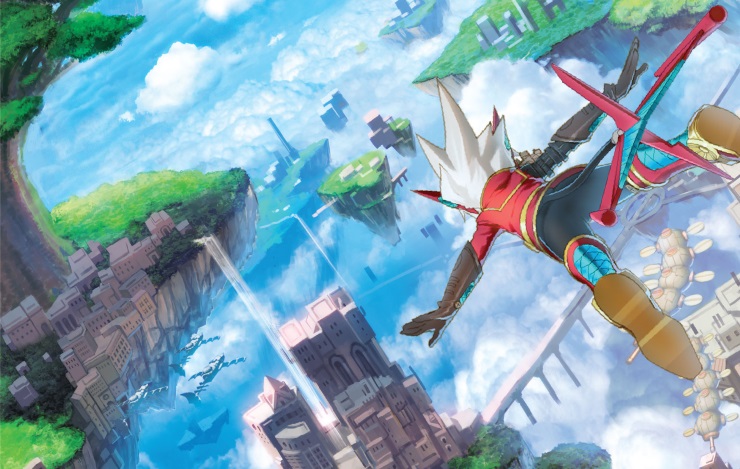 Rodea the Sky Soldier is a name I’ve seen multiple times across online forums, and when NIS America announced that it was getting an English release, I was excited. Rodea is the brainchild of Yuji Naka and Zin Hasegawa, who worked on the Wii version of the game. The Wii U and 3DS versions have been developed by Kadokawa Games and play differently. After seeing how Rodea looks and plays on Wii, the 3DS version feels like a clunky and poor afterthought.

One of the few things that really works in Rodea the Sky Soldier is the story. The sky kingdom of Garuda is being invaded by the Naga Emperor Geardo and Rodea, a machine soldier, stops him. This is where the prologue ends. A thousand years later, an inventor named Ion discovers Rodea, who wakes up and tries to catch up with current times. As expected, Naga forces come back, and you traverse through stages defeating enemies and collecting various things to help you on your journey to fulfil your promise of protecting Garuda. Rodea starts off with one of the worst openings I’ve ever had the misfortune of experiencing. The prologue area looks hideous, and this is where the controls are explained. Imagine playing a point and click adventure mixed with what is seemingly meant to be a fast-paced game with only the buttons available on the old 3DS systems. It just doesn’t work as it should. Rodea has to fly from one island to another to reach his goal. This becomes very annoying thanks to the circle pad targeting system and the flight system that requires pressing A to propel you towards a target. Pressing L and R to rotate the camera by 90 degrees is all the control you have over that and this makes everything less fun overall. I would have enjoyed Rodea the Sky Soldier a lot more had there been proper Circle Pad Pro or C-stick support for free camera movement because many situations involve you being stuck in awkward positions made worse thanks to the horrible camera.

Once the prologue ends and you have some backstory, everything feels slightly better with brighter visuals, good music, and proper explanations of objectives. I had the prologue bug out on me twice and it feels so poorly designed that I couldn’t even tell what I was doing wrong initially. Every few stages of Rodea the Sky Soldier, you’ll face a Shadow of the Colossus-style boss fight. These fights are interesting, albeit a little annoying thanks to the camera again. There’s a lot of replayability thanks to lots of collectibles and some hidden areas, and you’re awarded a rank for each stage. Voice acting in Rodea the Sky Soldier is a pleasant surprise: there is a lot of spoken dialogue and you have the option to use Japanese or English for voices. This is decided when you start a new game and can’t be changed later. I also really enjoyed the catchy, memorable soundtrack after the prologue ended.

I played on a New 3DS XL and the performance was poor. I noticed the frame rate drop in various areas and when you consider the bland visuals, that’s really disappointing. Rodea the Sky Soldier on 3DS is a poor version of what looks like an otherwise fun game on the Wii. If it had a better camera and controlled well, I would recommend it to everyone, but as it is, it just isn’t worth playing for the sake of a few interesting boss fights, a decent story, and a good soundtrack.

Rodea The Sky Soldier on 3DS has very few good things going for it, overshadowed by atrocious controls and bland visuals. It is designed to be replayed, but I don’t ever want to experience it again.