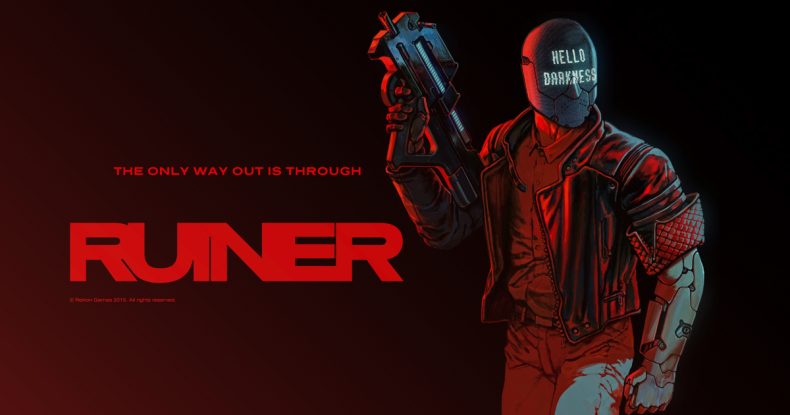 I’ll be dead honest with you: I hated Ruiner for the first hour. I mean I really hated it. I rage-quit, restarted, swore and swore and swore. I was doing what the tutorial told me to, but reasoned during the sporadic moments of levity that occured between all the spittle-lipped cursing that either I was doing something terribly wrong, or that the game was broken. Obviously, I plumped for the latter choice which, I later learned, was bollocks. I was simply playing it like any other top-down shooter, which doesn’t really work here.

Ruiner is very hard, and very demanding. It has a steep learning curve and refuses to pander to our candy-ass gamer sensibilities – yet manages to still be accessible somehow. In it you play a fella who wakes in a sinister facility called “Heaven” with no memory, very little free will, and a high-tech mask attached to his face. The mask, resembling a motorcycle helmet, remains blank until the twisted puppet-master who controls you has a use for you, such as killing the boss of Heaven, at which point it lights up with your objective. At other times it can show countdown timers or enigmatic idioms that may or may not be psychological triggers.

After you’re set free by a shadowy underground resistance, you’re taken to task by various other puppet masters on a blood-smeared, brain-spattered quest to destroy the one who made you. As with all top-down action games with Devolver Digital’s involvement, this quest leans quite heavily on smashing peoples’ heads to tiny pieces.

The controls were a tangle for me at first. You use the left stick to move around, and the right stick to turn, like any old twin-stick shooter, but for some bizarre reason I kept forgetting to actually turn, blindly backing into bullets and baddies like a broken spinning top. Eventually it started to resonate, by which time Ruiner pulled that bastard-arsehole trick that games pull when they start you off powerful in the tutorial and then rob you of it all in mission one. A super-cool, three-point dodge move I spent ages learning in the tutorial was suddenly gone, leaving me to get slaughtered over and over again as I squeezed the left bumper in utter desperation. Earning Karma (rather oddly, through brutal murder and random exploration) allows you to level up, either upgrading or unlocking new skills. The abilities themselves are a grab bag which, thanks to limited spaces in the action wheel, you may accidentally overlook. Don’t. They’re all essential.

There’s a deployable shield (which you unlock early on) that consumes Energy but ultimately stops all projectiles for a while. You can then combine that with the dash to create a sheild bash that does immense damage to enemies. Mix in guns that chain lightning between foes, static forcefields and a freaking katana, and you’d think you’d be equipped to deal with anything, but you’d be wrong. Way wrong.

Similarly to its Devolver Digital stablemate Hotline Miami, Ruiner hates your guts and wants to make you cry, at times ramping up the difficulty to insane levels even when you’re playing on Normal. Even with the auto-slowdown when you activate the dash or bring up the skill wheel, you always feel that the clock is against you – a mean feat by the developer when you consider that, most of the time, there is no clock. When there is though, hoo boy. Certain encounters have a tiny countdown extended by bloodshed. Every kill adds time, forcing you to forget caution and summon up everything you’ve learned so far, which you’ll discover every time is sod all. The weak of heart become all fingers and thumbs as Ruiner throws enemy after enemy at you, in twos and threes, armed with guns and blades and bats, and it’s easy to get turned around and battered down in seconds. Boss fights are often tall orders, too, pitting you against heavy-hitting psychos with huge health bars and unique attack patterns.

You’d be forgiven for assuming the violence and action, as pure as it can often be, is the star of the show, but that accolade goes to the effortlessly cool atmosphere. The grim, cyberpunk world of Ruiner is incredible to behold, painted largely in red and black when on mission, but sprinkled with gharish neon and crowded with detail when you’re wandering around the city between objectives. Conversation choices are wonderful, as your protagonist usually has two stock responses comprised of “nod” or “shrug”. Sometimes you can even “wait”. The overall story can feel a little disjointed at times as it likes to spoon-feed exposition and the dialogue isn’t particularly revelatory. The macabre undertones reminded me of Hotline, as did the protagonist’s central predicament of not knowing who to trust but having no choice but to follow.

Ruiner can be a disturbing, frustrating and exhausting game at times, but when you finally get it and it all clicks into place, the balletic violence is immensely satisfying. There are enough skills and upgrades to make progress feel real and worth your time, and the boss fights and dark humour are entertaining enough to off-set any repetition in the minute-to-minute combat. Its atmosphere and difficulty won’t appeal to everyone, but for those who seek out a challenge and are drawn to dark, dystopian worlds, its a frantic tumble into a ragged, bloodstained rabbit hole.

Story isn't all that
Can be frustrating
Very visually dark

Fun and frustrating, often in equal measure, Ruiner is polished to a high shine but still won't appeal to everyone.