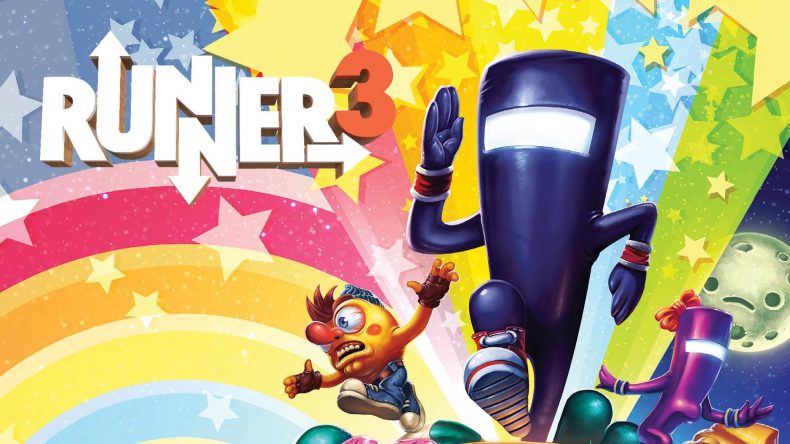 Full disclosure before I begin: I’ve finished the Dark Souls Trilogy. Beaten Bloodborne. Remember Ninja Gaiden II? Clocked it. Had a good crack at Super Ghouls ‘N’ Ghosts and Battletoads back in the day, too.

I say this not to show off, because if you know me you’ll know I finish most tough games through perseverance rather than innate skill. Rather, I say this because I feel I’m a fair judge of difficulty, and Runner3 is hard.

The threequel to Bit.Trip.Runner, is a game built upon the often unholy union of relentless forward momentum and precision timing. It might well be a beautiful game, what with its bright, bold colours, unique artstyle and detailed backgrounds, but it’s a wolf dressed up for dinner. And it bloody knows it. Par example: when you fail, and fail you will, it flashes up the number of deaths so far. There’s no reason for this other than to announce to you and anyone in the room (your children, perhaps, who’ll then take great delight in shouting out the number like a town crier every single time) that you’ve died on the same stage 57 times.

This happened to me. And I never even finished the level.

But I forgave it. Because, in full swing, Runner3 has an effortless flow that fills you with something close to euphoria. It’s often broken when you slam headfirst into a brick wall, a spike trap, or a murderbot with rotor blades for arms who smiles all the time, but like all the truly difficult games, it’s only hard until you get better at it.

I’m not saying it’s perfect. There is a lot of trial & error, for a start. The levels rattle by at a fair old clip, and obstacles often pop up with only a heartbeat’s notice. To begin with you need only jump, but soon you’ll be sliding too, then kicking through walls, double-jumping, bouncing from pressure pads and leaping into mine carts and airplanes. Hazards are many and varied, and a drop in concentration will see you banished either back to the start or back to the sole mid-level checkpoint. Each level is littered with gold bullion, which chimes on time with the music as you collect it. When combined with the flawless run (either from start to checkpointbor from checkpoint to finish) that you will eventually have to pull off to clock the level, this little touch is sublime. Hitting the finish line is never short of exhilarating. Once you’re done you’ll unlock the Gem Run, a second route wherein you can collect amethysts to buy clothes and accessories from the shop to outfit the two player characters, CommanderVideo and CommandGirlVideo.

Boss fights guard the final stage of each world, and switch up the gameplay to present something new. They’re not groundbreaking, but they’re fun – and ironically less challenging than the running levels. That said, nothing is more difficult than the bonus stages that you’ll need to trade bullion to open. These little pockets of hell serve as the steepest challenges Runner3 has to offer and they will make you swear just for kicks. Though, you could also indulge in some of the retro levels if you fancy a change.

Runner3 is similar to those hard as nails games of old in that it wants you to fail. It wants you to spend 40 attempts learning the timing of every trap, the distance of every jump and placement of every collectible, because it’s the only way you’ll get better and move on. It’s a loop of risk and reward, of failure and success, that keeps you coming back for more. And really, that’s okay.

Lots of trial & error
Only three worlds
Will cause rage

Runner3 is reminiscent of the hard as nails games of old, and wants you to play the game over, but it will cause you to lose your temper