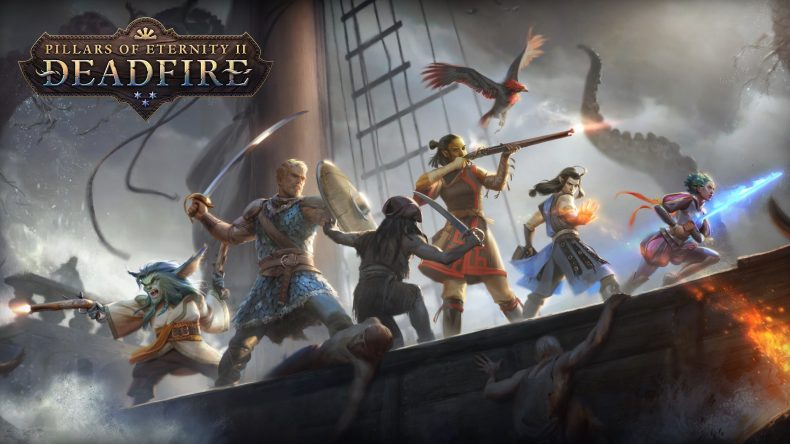 Western RPGs can be a bit samey really, can’t they? Most of them are based in some way on Dungeons & Dragons or some other form of medieval fantasy. Personally, I love those settings, but every now and then something special comes along and it does things a little differently. Pillars of Eternity II: Deadfire is one of those games.

I’m not going to pretend that the core gameplay is particularly different from the first game, or even from the games that inspired it, such as Baldur’s Gate; Deadfire simply changes the setting ever so slightly, from the usual medieval fare to the freedom of the high seas. You see, Deadfire is the new setting, the Caribbean-inspired Deadfire Archipelago to be more precise. After the opening cinematic, in which we see the god Eothas rising from beneath Caed Nua, which just so happens to be your home, destroying everything and killing almost everyone in your little kingdom. Next thing you know, you’re speaking to another god in an ethereal realm, before being catapulted back into your body aboard a ship. Before you can grab yourself a coffee after the world’s longest sleep, your ship is boarded by pirates and pretty soon you’re left wrecked at sea, before washing ashore on an unknown island. The hectic opening really does help to hammer home the weird, wonderful and downright barbaric nature of the world of Pillars of Eternity II and its new setting.

I know you’re wondering if you can play this sequel if you haven’t played the first Pillars of Eternity, and the answer would be a resounding yes. As some of you may know, I only ever got around ninety minutes into the previous game (I’ll eventually go back to it), but I had no problem whatsoever in understanding Deadfire’s story. This is partially down to the story itself being quite separate to the previous game, requiring no knowledge of prior events to enjoy this new adventure. It’s also because, if you’re ever unsure of something, certain words are highlighted during conversation and, with your mouse cursor hovering over it, you’ll be treated to a proper explanation. A small example would be the term ‘ekera’, which is a Huana term (a race within the Deadfire Archipelago) that can be a term of familiarity, or even one of exasperation, which you might hear often. Especially if you play the way I do, aiming a little too much sass in the direction of others. Of course, it isn’t just about the conversations you’ll have with key players within the world; it’s also about the exploration and battling with a varied array of creatures and villains. In this, Obsidian has absolutely nailed the formula. Exploring the Deadfire itself is a wonderful distraction, with the game’s camera pulling right out to look down upon the seas and your little ship, a little like an overworld map on an old JRPG. You’ll have to hire a crew and provide them with food and drink to keep them happy, which can feel a bit tedious at times, but it’s certainly something you’re best keeping on top of. You and your crew will cut through the waters in your boat (which can be upgraded, and even replaced with a bigger ship), but you aren’t the only one sailing the archipelago. Some AI boats will pass you by, merchant ships on their way to delivering goods to port, but others could very well be hostile, making a beeline for you and triggering the new ship combat.

In over twenty hours, I only really encountered two or three ship battles, but they are quite interesting and very different to the rest of the game. The game will switch to a text-based screen, with a ship compass at the bottom that shows you in relation to the ship you’re facing; you’ll have turns in which you and the AI will take turns to position your vessel or take shots at the enemy, resulting in an unseen dice roll and a very D&D-style hit/miss scenario. I personally loved this, as it still feels tense when the game announces that you’re being fired upon; you’ll hear the sound of cannon fire as you await the outcome, then the sound of explosions or harmless splashes, depending on how lucky you are. In my second ship-to-ship battle, it didn’t end with cannonfire, instead my enemy rushed in close and boarded me. This then switches back to the traditional view, closing in on the deck of the two ships as your group of warriors, priests and various other classes, stands across from whatever is coming aboard for battle. Now, if you’ve ever played a game like Baldur’s Gate, Icewind Dale or the first Pillars of Eternity, you’ll know exactly how combat plays out. For anyone else, it’s a very isometric affair, as you look down on a mix of 3D and pre-rendered backgrounds, with your fully 3D characters wandering around as you please. The combat is essentially real-time (but with behind-the-scenes dice rolls), but you can pause the action with the spacebar and dole out instructions to best suit each battle scenario. If, like me, you struggled with games like Baldur’s Gate because of their quite hardcore D&D nature, do not worry; Pillars of Eternity II’s difficulty can be tailored to suit each type of player and it also has an option to scale enemy difficulty to your current level. This means that if you accidentally wander into an area that would otherwise crush you under its heel, the game will scale the enemies down to your current level, making it more palatable but without removing too much challenge.

The story and writing is where this game truly excels, however, even on top of the already stunning gameplay. Not just the main story either, but the side quests and even the banter between your party members as you roam the various environs. I loved the voice acting throughout, with some absolutely cracking performances, especially Edér and Serafen. I particularly liked the transition scenes, in between each act, with the narrator reading everything like a disembodied bedtime story. But the way everything ties together, subplots influencing the outcome of the main story and even introducing entirely new characters and areas without ever feeling like padding; you can’t help but be incredibly impressed by what Obsidian has done with Pillars of Eternity II: Deadfire. That said, as much as the storytelling itself doesn’t feel like padding, there is one very big padding-esque point in the main story. Without spoiling specifics, events leading into the final act require you to make a choice, which can result in a bit of an unnecessary grind if you want to go the best route to the end. It’s not a deal breaker, but it feels a bit clumsy in a game that is otherwise wonderfully intelligent.

With most Western RPGs content to stay on the muddy, brown land of fantasy, Pillars of Eternity II: Deadfire delights in plundering the treasures of the fresh blue oceans. Sailing provides welcome bouts of relaxation, in between the cannonfire and the ringing of steel, and exploring islands, cities and dungeons has rarely been better than this. Top it all off with some incredible writing and voice work, and you’ve got a contender for this year’s best RPG.

Pillars of Eternity II is incredible. From the layered-but-accessible combat, to the deep conversation systems and sailing around a world packed with quests and events; there are few RPGs out there that can stand up to this giant.