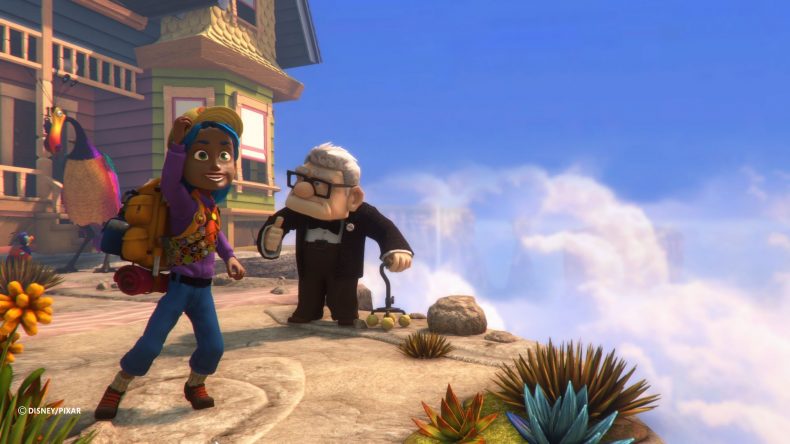 When Kinect Rush first hit the Xbox 360 several years ago, it was at a time when the Kinect was in desperate need of a kick in the backside, and when the franchises featured in it were the cream of the crop. Unfortunately it’s now 2017, Kinect is, if we’re really honest, dead, and a lot of the kids who got excited about Ratatouille and Up – and even Toy Story or Cars – are probably a little too old to fully appreciate what Rush: A Disney Pixar Adventure is offering.

The premise is certainly kid-friendly enough. You start by creating a child avatar and traveling by virtual bus to a Pixar themepark. There are six worlds within the park based on different franchises: Cars, Toy Story, Finding Dory, The Incredibles, Up, and Ratattouie.

Hanging around outside each area is an excitable child who’s dying to play with your character, and who will act as your guide within the world. Not that you really need one, to be fair. The activities on offer are as simple as you’d expect, asking you to run, fly, drive, or sprint along a themed track collecting coins and unlockable tokens. In the Ratattouie attraction, for example, you’ll be sprinting across rooftops or rafting down a river, while in the Cars world you’ll be racing alongside Mater. The Incredibles area sees you battling Omnidroids as a costumed hero beside various members of the Part family.

It’s all pretty undemanding – unless you really want the gold medal in each event. I’m a decent player with a lot of years of gaming experience and, even though I wasn’t exactly pushing myself, I never cleared silver. My kids (7 and 9) couldn’t either, although it’s fair to say that they got more mileage out of it than me. Long after I was bored they were still jumping in for one more run, working together to collect the coins and playfully competing (there were certainly fewer death threats exchanged than during most games). As simple as it all is, Rush does look bright and colourful. The graphics are hardly cutting edge, but they do have that undeniably loveable Pixar sheen to them. And because it’s so straightforward, there are very few problems with how it runs or plays, though the kids that follow you around from attraction to attraction are a bit annoying.

Rush succeeds in being an entertaining game for youngsters, even if it could have done with some more up-to-date franchises and a little more variety in its game modes. Ultimately, you’re doing the same thing in every event with slightly modified controls and different animations, but for younger kids it seems to be decent enough fun in short bursts.

Colourful
Easy to pick up

A bit samey
Some franchises are dated

An entertaining game for kids best enjoyed in short bursts