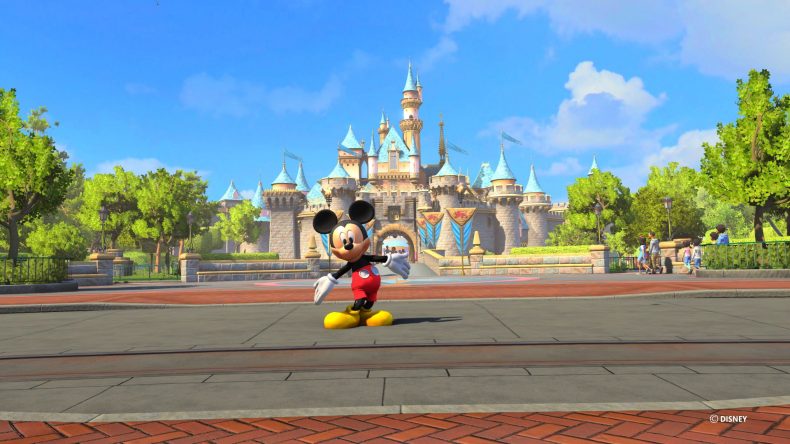 The idea behind Kinect Disneyland Adventures when it was released six years ago was that kids could experience the magic of the titular theme park without having to leave home, through the wonders of Kinect and the Xbox 360.

Unsurprisingly, it appealed – and still appeals – primarily to kids, allowing you to run around a (compact) virtual recreation of the park, interacting with Disney characters like Peter Pan, Cinderella, Mickey Mouse, and Goofy, performing little fetch quests for them and partaking in small events based on real attractions.

It’s all very twee, obviously, but with or without Kinect, it’s not all that compelling. For example, entering the Peter Pan Flight attraction, which is the first one you come across, presents you with four events to play. The first sees you flying though the nighttime streets of London collecting coins, but it’s very easy. Even as a kid’s game, the level of challenge is on the floor, with no fail state and a feeling that you’re more or less on rails. The second event is more Kinect-oriented, as you bat bombs back at Captain Hook’s crew from the air above the Jolly Roger. Again, you can’t really fail, which is ideal for the target audience, although even my children were getting a little bit bored after a few goes. Luckily, there are quite a few attractions included, with other events such as skiing and dancing via quick time button presses.

Outside the events you can run around performing tasks for the characters, like fetching an autograph book to Goofy or finding lost “dinglehoppers” (forks) for Ariel the Little Mermaid. Legging it back and forth through the crowds is a bit mundane, but you’re rewarded with collectible pin badges and other mini-missions as a result.

If you have access to Kinect, Disneyland Adventures is slightly more enjoyable, but young children are going to find plenty to keep them invested with or without it. It looks lovely and there’s lots to do, but it feels a little safe by today’s standards.

Lots to collect
A variety of characters
Accessible to kids

Lots of running around
Nothing new
A little bland

Young children are going to find plenty to keep them invested with or without it. It looks lovely and there's lots to do, but it feels a little safe by today's standards.