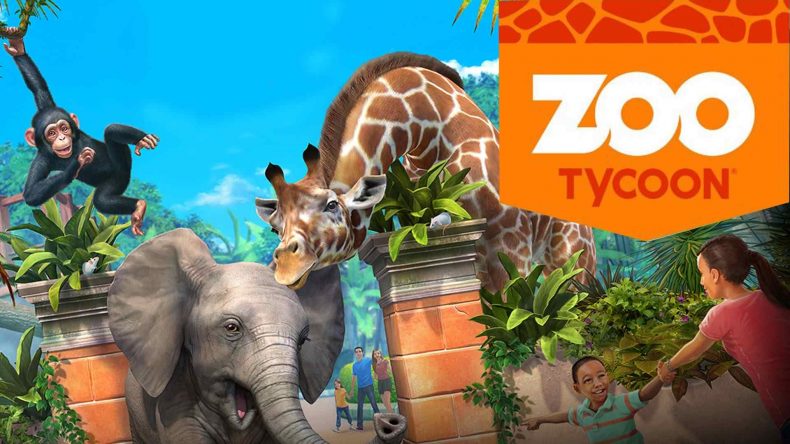 It’s hard not to smile while feeding or playing with the animals in this game. In fact, the mere ability to run around your zoo as you created zookeeper is probably the smartest decision developer Blue Fang Games could have made when making a game like this. Too often these park-building games focus on the management overview, forgetting that sometimes players might want to take in their creations from ground level. And what kind of unfeeling monster doesn’t like zoos?

If you’ve never heard of Zoo Tycoon before, it’s a series that began on PC in 2001 and it tasked you with building and maintaining a zoo, similar to games like Theme Park and the earlier Tycoon game, Rollercoaster Tycoon. This new game, an enhanced version of 2013’s Zoo Tycoon, aims to add a little more variety and challenge to it by giving you objectives and time limits that keep you on your toes. Fear not, those of you who enjoyed the slower pace of the original PC games, because you can still play the same way you did before; concentrating on the building and management of the zoo. New players will want to jump into the tutorials first, in order to get to know the gameplay mechanics and see a general overview of how to manage their zoos. There are ten in total, each probably taking around five minutes or less and they walk you through everything from building exhibits and adopting animals, to more advanced techniques like encouraging breeding and eventually releasing animals into the wild. It even teaches you about wandering around your zoo, either on foot or by calling in and driving a little buggy; “don’t worry about the visitors,” the game explains, “they’ll move out of the way!” That’s kind of true, although I’d say it’s closer to being shoved aside as you drive through the crowds. It’s daft, but it adds to the charm of the game.

Once you’re ready, the challenges await. These come in three difficulties, the usual easy, normal and hard; across three separate campaigns that span the original game’s content, plus two new locations in South America and Australia. These challenges are timed, giving you a deadline to complete a set of objectives as you manage your zoo. Sometimes it’s just a case of levelling up your zoo, which happens as you improve it via adopting new animals or building new facilities; more difficult challenges might ask you to foster breeding within a specific species or they simply throw more and more objectives at you, increasing the pressure as the timer counts down to zero. Luckily, the difficulty curve is very forgiving, because this game is clearly geared toward encouraging a more fun experience for all players.

On that note of fun, the Sandbox mode is designed to let players loose without boundaries or objectives, as it gives you unlimited funds and starts you off at the best level you’ve achieved in the challenges. Even if you start at the lowest level, you can still build well beyond that as you research new species and larger exhibits. This more relaxed approach allows players to just go at their own pace, although don’t think it means you won’t be cleaning up the poop (no really, you have to clean up the animals’ poop yourself) and micromanaging the enclosures. That extreme level of management detail actually reminded me of the first games in The Sims series, wherein you could never just leave them to take care of themselves for a while. You’ve all seen the results of disastrous cooking incidents in those games. While the elephants aren’t going to burn themselves alive in the kitchen, they’ll still use up all the food and water from time to time; and while you can employ people to deal with these things, inevitably you’ll find yourself called upon to fix major issues. Sometimes these will have nothing to do with the animals; burger bars and other facilities can break down, requiring a fix (although if they break down three times, you’ll have to replace them). Very “videogamey”, but it works in keeping the player engaged. This Ultimate Animal Collection may not be a new game, simply enhancing the visuals a bit and adding South American and Australian animals and challenge scenarios, but it does offer a fun and colourful experience nonetheless. The animals are all realistically animated and the crowds of people interact with the zoo’s attractions as you would expect, but there’s a cartoony flair to the visuals that make it a bit more appealing to look at. When you get in close to feed and interact with the animals, it really is as sweet as you would want; playing the sensory minigame with a baby monkey is just the best, as the little guy/gal attempts to mimic your imagined gestures (via various analogue stick combinations). Kids will love this part of the game. But while it does look good and is fun to play, the standard Xbox One version framerate is quite poor at times. I started off there, before using the Play Anywhere feature to simply continue my game on the PC. While it may not be fair to compare the two, my PC is comparable to the Xbox One in terms of power, yet it runs Zoo Tycoon with a higher detail level at 60fps flawlessly, instead of the 30fps of the Xbox version, that often dips below that when you’re at ground level.

Building and maintaining exhibits and facilities is incredibly simple with a controller, so much so that I continued using it on the PC version. It feels like it was built from the ground up with the controller in mind, especially as you’re able to control your keeper directly as you run around the zoo, taking pictures and interacting with the animals. It just means that anyone can jump in and enjoy Zoo Tycoon, and that returning players have more content to explore in this Ultimate Animal Collection. It’s rare that a tycoon/management game interests me, but I really enjoyed this one. You will too.

Basically a ‘complete edition’ of the original release, Zoo Tycoon: Ultimate Animal Collection adds enough to keep both fans and newcomers happy, providing challenge for those who want it and a sandbox mode for those wanting a more laid back experience.