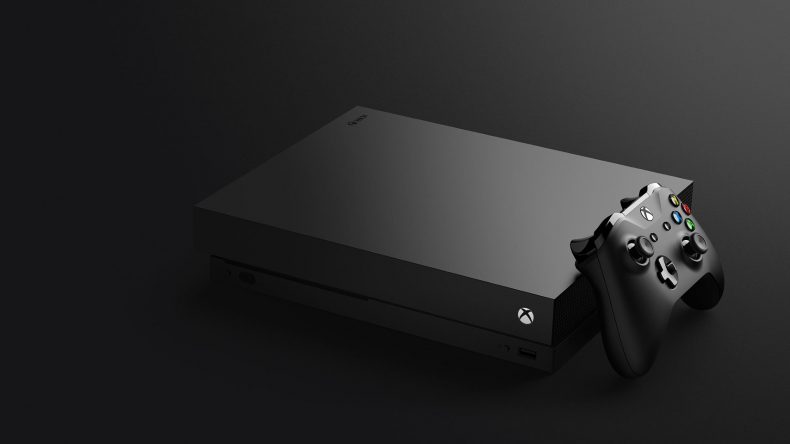 “This thing is a monster”.

That’s the first statement the Xbox One X brought to my mind. A hulking, heavyweight Xbox One, fitting the form factor of the S, but hiding the special sauce inside that makes it the most powerful console out there. It’s heavy, yet unassuming in a modern TV setup, and a lot smaller than its competition of the PS4 Pro. But when the “new goodies” feeling wears off, all we’re left with for our expensive tech purchases is how it performs and how it lasts, and the thing is that I can’t really give you too much of a definitive answer on that yet. It’s not that Microsoft didn’t supply us with the unit ahead of time, we’ve had lots of time to play with it, it’s just that (pre-release anyway) the game updates haven’t been released to show off what every title can do.

So before we get stuck in, let’s get the dull stuff out of the way: this console comes with a controller (not the incredible Elite, just a bog-standard Xbox One pad), power cable (the PSU is internal, so it’s the same cable as the S-model), a high speed HDMI cable (to ensure you can get a good 4K HDR signal out of the box), and aside the console itself, some batteries for the controller. No USB cable, no frills, really – just the business.

Setting up the X is the same as any other Xbox One (which is to say: easy), only you get a new intro before the “green” splash screen, reminding onlookers that, yes, this is the X, not the S. Your TV’s HDR and/or 4K settings will be automatically detected, and then you’re away, it’s just a case of getting the games and playing them.

Just like Sony’s 4K machine, Microsoft’s X is at the behest of the developers to push it to the limits. Forza Motorsport 7, being a first-party development looks astonishing. Not the “Oh this game looks amazing, I best say that in a review” kind of astonishing. No, this is… this is next level stuff. With skyboxes that are as close to real-life as I’ve ever seen in a game, and a frame rate that I just couldn’t break, this feels like a new way to experience console games. It made me feel a bit funny, in all honesty, and I’m not sure why. It felt different, and took some adjusting. Driving games are no stranger to “best graphics” categories, but the power the console has pushes it, and it is just incredible to behold.

Sticking with first-party, Gears of War 4 has been given the X-treatment. Two options present themselves which amount to choosing from a true 4K experience, or a higher frame rate with better textures. Unless you’re into pixel counting, you’re going to struggle to see the difference unless you really get up close to textures and try to find fault. The performance setting gives a better look than the base game, but adds “up to” 60fps for single player and horde mode. In practice, this gave me the same strange feeling that Forza 7 did, and it’s because you’re not used to seeing a console deliver this kind of performance without flaws. I tested random levels, indoor and outside, and Gears 4 didn’t appear to drop any frames. This is rock solid, and was the moment I realised I needed to upgrade my PC. Actually, on that note: I currently run an i7 processor with 16GB of RAM, with a 970 GPU. I’m well aware that it’s coming time to push forward, perhaps to a 1080 when affordable, but it’s never been an issue because, until now, my PC has never struggled, nor dropped frames except under extreme pressure. The Xbox One X has made me realise that the time to upgrade is now, at least if I want to keep my PC as the most powerful gaming device in the house. That realisation doesn’t come easily to someone who has always said “if you want the best experience, it’s on PC”, I can tell you.

Back to the games, Super Lucky’s Tale is one of the launch titles, and I think it’s a mixed bag of charm and annoying – an arbitrary life counter that only serves to frustrate by way of also having checkpoints and a health system, but it is a better experience than the VR game. On the X, it performs pretty well, though I did notice dropped frames on the first world’s boss, despite the promise of a “smooth 60fps”. The game, nor console, is out at time of writing, so there’s perhaps time to patch it. It’s not a huge deal, and it’s very uncommon, but it did happen. I’d almost certainly blame the game developer, not the console.

Elsewhere, I’d have liked to test Assassin’s Creed Origins, but it isn’t listed under “Xbox One X Enhanced Titles” yet, so I can only assume the patch is incoming. The same goes for The Witcher 3, Quantum Break, Middle-earth: Shadow of War, and ReCore. Titanfall 2 is still one of the best shooters of the generation, and runs as smoothly as you remember, only now the textures are of a highly quality. This console is the one I’ll be on for the future. The power of it means it’ll always be getting the best, or at least level-best version of a game, and I’m happy with that.

Interestingly, Microsoft included a 4K Ultra HD Blu-Ray of Planet Earth II. You don’t need me to tell you how good a documentary series that is, nor how good it looked, but it’s worth noting the Xbox One X can play Ultra HD Blu-Rays, which the PS4 Pro cannot (it’s still ridiculous, but there you go), and that they look utterly spectacular. Planet Earth is an excellent choice to show the Blu-Ray capabilities of the device off, and helps make the argument for 4K and HDR shot, as it must have been, with cameras that cost as much as my house.

The issue going forward, then, is one of software. Microsoft have the best machine out there, now, and while this is a review in progress, I’ve seen and played enough to be in doubt of the power of this thing. Sure, it’s not the cheapest, but it genuinely is the most powerful and I’m very excited to see what developers will do with it going forward. But we need games now. Super Lucky’s Tale and some rehashed Xbox 360 Kinect games are not the showcase this system deserves. Forza 7 is, but it’s a niche game that is designed for a specific market of racing game fans. The dashboard seems fixed, and there’s none of that lag you get on the current console, and again, while this is a welcome improvement, it’s not why you’re buying the X.

Wolfenstein II: The New Colossus and The Evil Within 2 run incredibly well on the X, which shows that Bethesda are on board, but titles like Destiny 2, while getting 4K support, won’t be patched to offer a performance mode. Whether that’s due to marketing deals with Sony, or to keep the multiplayer on an even frame-rate for everyone, who knows, but it’s a shame that it won’t be getting to run as smoothly as the PC version does. Indie games are being patched, like Danger Zone, and as time goes by there are more titles being listed under the “Xbox One X enhanced tab”, which is great to see. Even more impressive, is that third-party Xbox 360 games are getting the X-treatment: Skate 3 looks like it’s almost a remaster, so cleaned up does it look.

The honest truth right now is that I can’t tell you if it’s worth the money – that’s a personal decision – but if you don’t own an Xbox One, then this is the console to get. If you have a 1080p TV, you’ll still be getting the best performance, and for my money, finally getting a console that appears to be able to push 60 frames across the board is a far bigger deal than the jump from 1080p to 4K resolution. Sure, you’ve got the best of both worlds if you do have a 4K HDR capable TV, but it’s the potential draw of the higher frame rate that impresses. If developers can leverage the X’s power, then this console is going to close the gap between PC and Xbox in a way you very much feel Microsoft intended, but perhaps more importantly, if they can get more exclusive titles, it not only closes, but usurps the PS4 Pro as the place to play games.

Review sample provided by Microsoft.
Liked it? Take a second to support GodisaGeek.com on Patreon!

Finally a console that seems to be able to do 60fps right, and although it's amazing what Microsoft has achieved for the price, it needs exclusive games to truly sing. The X is a beast, no question, and it's exciting to think what it can be used for.