previous
The Dragoness: Command of the Flame review
random
next
Shin-chan: Me and the Professor on Summer Vacation - The Endless Seven Day Journey review
0 likes 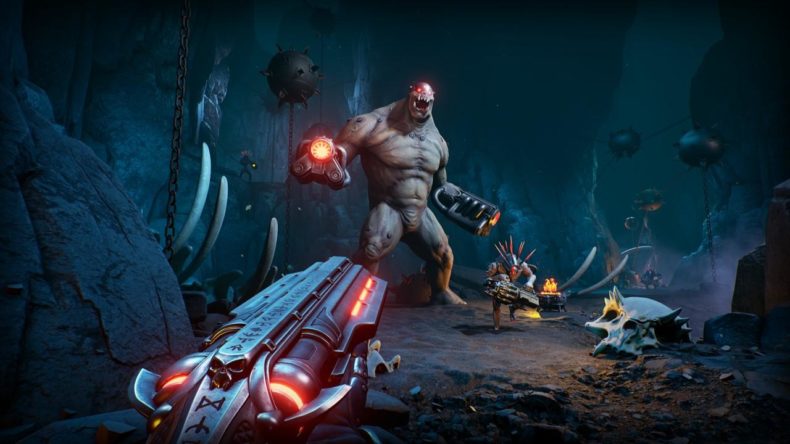 It’s hard to argue with Doom‘s popularity when every year sees multiple pretenders to its crown hit the market with varying degrees of success. The latest is Scathe, a gore and slime-drenched strafe shooter from Damage State that might as well be wearing an “I heart Doom” T-shirt.

Having spent some time with Scathe I can clearly see what the devs are aiming for (it’s pretty evident in the first three minutes) but I’ve also come away feeling oddly cold towards it. Because it feels like Doom then, and not Doom now, and while we’ve certainly got enough of the latter we’ve got a metric shit-ton of the former.

You play as Scathe, a warrior awakened by a seemingly benevolent entity to wipe away the demonic scourge that threatens creation. This involves big guns and explosions, but not an awful lot of personality. See, the thing Scathe seems to lack is a sense of direction or purpose. You enter a labyrinth, you find a gun, you shoot things until you find the way out of the room you’re in and then you repeat. 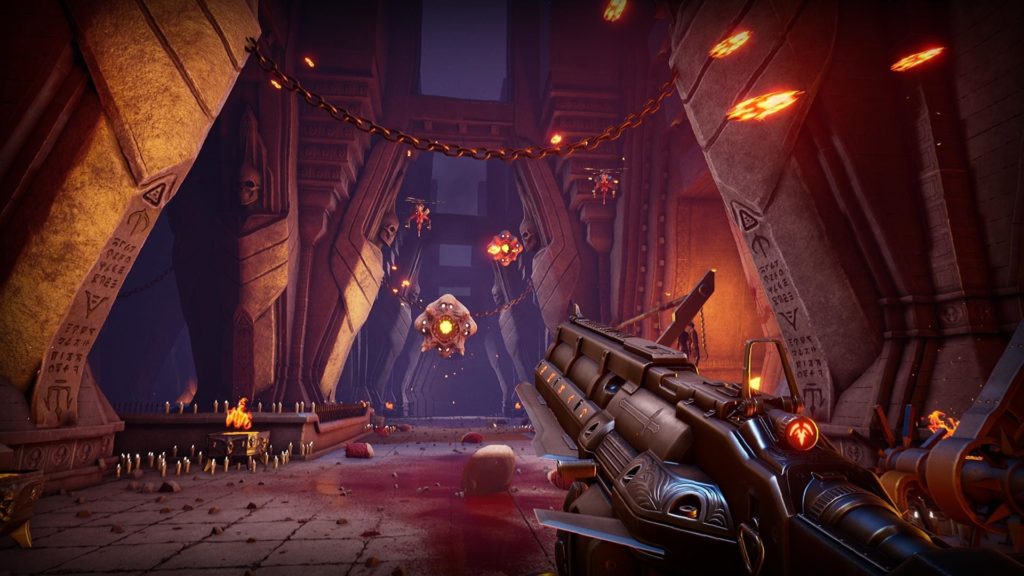 Enemies fly, run, stagger, or crawl at you, hurling or firing or vomiting projectiles. All you can do is shoot, strafe, dodge, and jump, blasting away at the rising tide until it stops for a moment. Each room of the labyrinth has several runes to collect, hidden power-ups, extra lives, and scattered ammo. Periodically you’ll be given a new gun, as your base gun has infinite ammo but lacks punch. Most of these are decent weapons of death, but again there’s nothing here we haven’t seen before.

I couldn’t help but shake the feeling that Scathe needs more edge, something to really get the blood flowing. As it stands you spend a lot of time back-peddling, watching your health leak away, searching for the next green doorway. There’s a map, which names rooms by runic symbols, but this suggests a roguelite element that does not exist. When you run out of lives, you just respawn ready to continue. It takes the edge off dying, and thus creates a plodding progression that fails to engage. 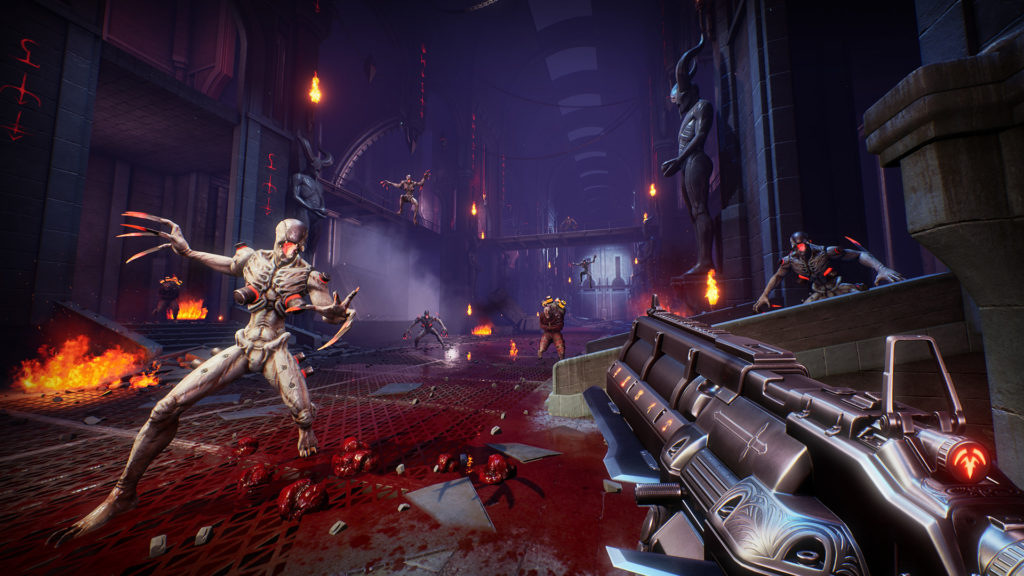 At a certain point, though, you’ll gain access to dark magic spells that allow you to wield powerful arcane abilities in your left hand. From freeze spells and fireballs to an unexpected healing spell, these attacks add some much needed colour and tactical nuance (only a little, mind) to proceedings. Being able to weild magic instead of the usual grenades adds a new element to Scathe that fits the universe perfectly.

The disembodied voice that guides your trigger finger adds moments of levity, too. While it spends most of the time admonishing you, it also offers words of encouragement and it’s fair share of mild insults as you blast your way through the hordes. These comments don’t always seem to occur in the right moment though, which is a little weird. What’s even weirder is that you’ll constantly find ammo for guns you don’t yet have, which feels out of place. 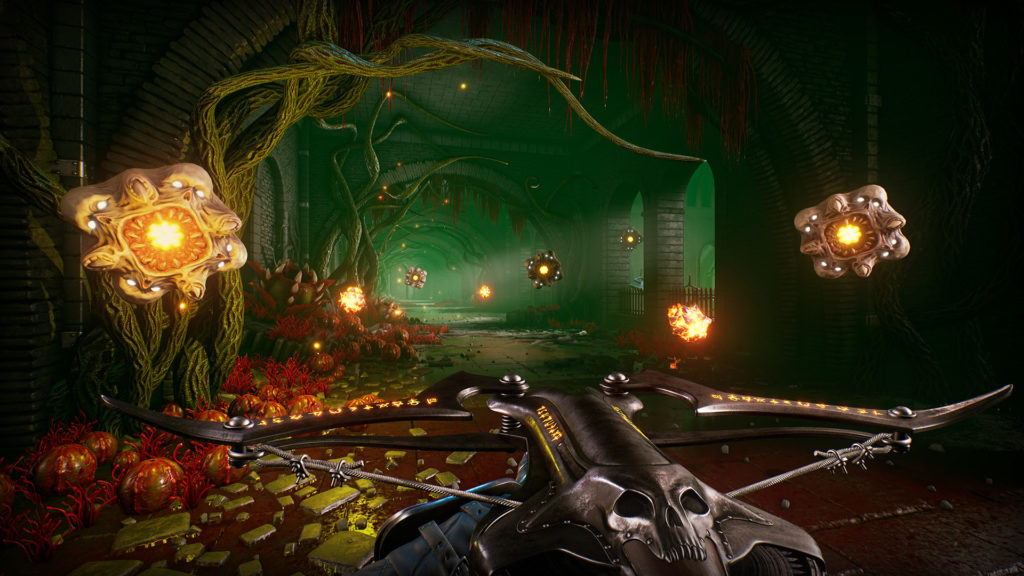 Scathe is a game that appears content to lead you by the gun-barrel, offering scant context and little in the way of rhyme or reason. You are required only to squib the hellspawn dropped before you with all the grace and evident strategy of a game of whack-a-mole. But in that simplicity there is fun and catharsis to be found. Like many of its genre-cousins, Scathe sets out to blow stuff up and does a perfectly adequate job of it.

Moving through the various hellscapes does eventually settle you into a kind of rhythm, but I couldn’t help feeling that Scathe really needs a does of metal. There’s something weirdly clinical about some of it, as you strafe and shoot and dodge with no background music to get your pulse throbbing. It feels too subdued despite the blood and guts bursting all over the screen. And while it’s satisfying to leave a room carpeted in brains and demon skin, it’d be more fun to do it to some thrashing guitars.

Graphically Scathe isn’t particularly dazzling, but the burning torches and gothic architecture get the job done. Sadly, this is kind of emblematic of Scathe in general. It’s a serviceable shooter with a few nice touches (wiping blood and viscera from your eyes when it starts to obscure your vision being one of them), but there’s little to set it apart from other Doom-likes and certainly not enough to trouble more inventive titles like Bullets Per Minute or the upcoming Metal: Hellsinger.

Scathe is a serviceable shooter with a few nice touches, but there's little to set it apart from other Doom-likes.