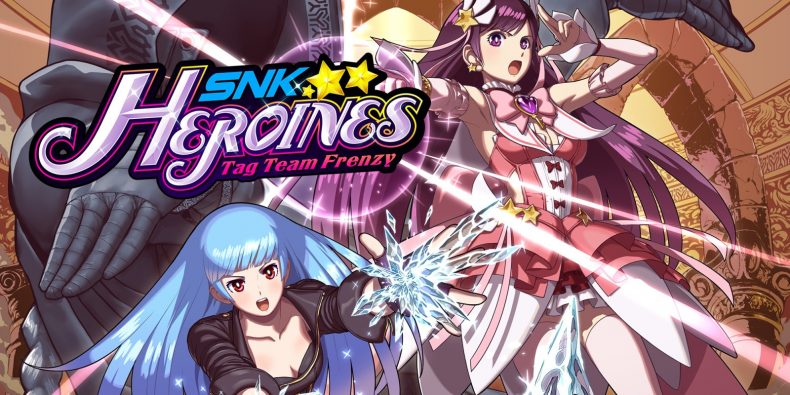 NIS America has been on a roll with announcements over the last year with many surprising fans of all genres. SNK Heroines: Tag Team Frenzy for PS4 and Switch was definitely an announcement no one saw coming but the fantastic SNK and NIS America teamed up to bring out a fan service focussed fighter with interesting gameplay and deep customisation. If you’ve read any of my reviews, I’m always up for some fan service in games but when a game seems to just be all about that, things can go either way. Having played SNK Heroines on both PS4 and Switch for a while now with the online modes tested, the results have been interesting. This review will focus on the PS4 version and I’ll have a look at the Switch port in the next Re:Port Review that you can expect very soon.

Despite what the name suggests, this isn’t a traditional tag fighter like BlazBlue: Cross Tag Battle. It has mechanics that draw from various games including Smash Bros and manages keeping the actual core fighting fresh throughout despite being very accessible. You select an attacker and a support character. Both share the same health bar but have their own special bars. This special bar lets you execute finishing skills and your characters unique skills. During rounds, items appear that are pretty unique making the fights more interesting with a randomness element. Your aim isn’t to reduce the health bar of your opponent to zero but to get it down into the red zone and then execute a finishing skill that needs your special bar to be filled by four blocks or more. Executing a finisher when your opponent’s health is in the red zone or the timer going off will decide who wins. While the usual suspects in terms of game modes are all here, I look at the story mode as more of an arcade mode where you have a bit of dialogue in between fights but since they’ve called it Story Mode here, it is disappointing – look at it more as an arcade mode. In addition to that, there’s a regular versus mode, survival mode against multiple opponent teams, training, and a tutorial mode. The tutorial is very nicely done which is always good to see in fighting games. Over the last few years, the smaller tier fighters have always ended up having great tutorials while bigger ones like Tekken 7 just assume you know what to do. SNK Heroines just released a few days ago but online on PS4 has been great. I’ve gotten a decent amount of games in over the last few days and only one was laggy which is a stark contrast to how terrible it has been on Switch.

One of the most advertised features here barring the lovely fan service is the customisation. It is really mind blowing. You can use in game currency to buy costumes, accessories, and voices. This mode also lets you disable the UI to take screenshots through a viewer option. The viewer lets you put the girls into various poses that you unlock and cycle backgrounds to get some interesting screenshots to say the least. The accessories are spread across the various body parts and you can equip things from devil wings to headphones and even an ambulance lamp. These carry into the fighting as well. You can save customisation sets for each character to use in battles or in the viewer. The overall visual quality feels nearly the same as The King of Fighters XIV with Mai’s idle animation being directly lifted from there. One area that’s a let down is music. It just isn’t memorable like recent fighting games where I look for the music on Amazon Japan or Spotify after spending a few hours playing. Voice acting is almost all in Japanese with Terry speaking English and while Japanese voice acting isn’t a problem, super small subtitles for the dialogue definitely gets annoying. Stage design isn’t great either and it definitely feels like the stages were an after thought here because of how boring they are design wise.

I know story modes in fighting games aren’t always amazing but after playing the fantastic ones in Arc System Works games and even Injustice 2, SNK Heroines’ story is plain bad. After a few rounds through it with characters I enjoy playing with, I just ended up skipping things and just going through the fights. The premise is already dumb but I feel like they should’ve gone all in with the fan service aspect instead of this throwaway story where you wake up in a mansion with a camera focusing on choice body parts to fight your way back against a mysterious attacker who will look familiar to The King of Fighters XIV players.

SNK Heroines is a competent fighter that is let down by a terrible story mode and some poor visuals. Having enjoyed The King of Fighters XIV a lot, these visuals are something I expected going in but for a new fighter in 2018, this needs some work. There are loads of references to SNK fighters that old school fans will no doubt enjoy but the accessible gameplay and fan service focus might turn off some from the same crowd. If you’ve been after a nice and accessible fighter that is chock full of deep fan service focussed customisation when it comes to characters, this is the game for you.

SNK Heroines: Tag Team Frenzy is a competent and accessible fighter that is held back by some visual issues and a bad story.